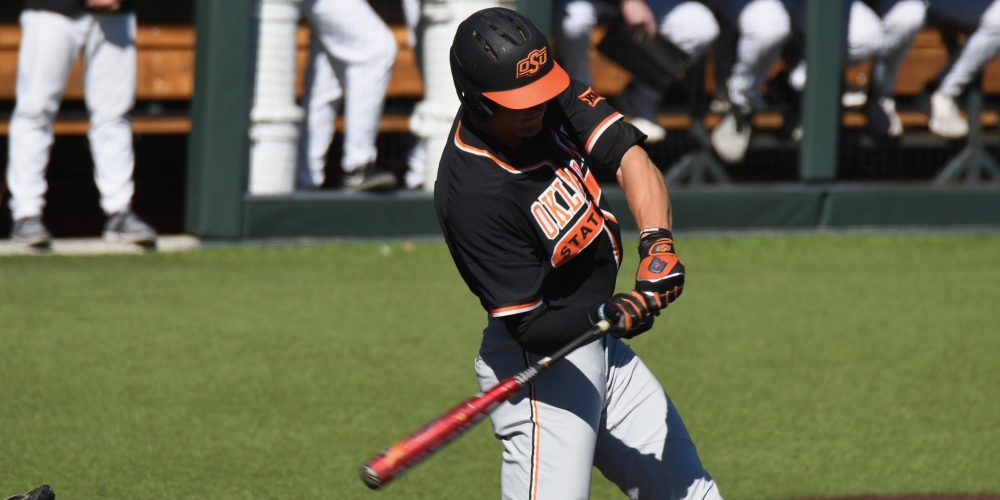 It makes life a little easier when the opposing teams walks you 16 times, and that was the case Friday night as the Hogs defeated Mississippi State 12-5 to clinch an important SEC home series. The Bulldogs struggled mightily on the mound with Peyton Plumlee walking three and allowing five runs in two innings of work, while the bullpen didn’t fare much better. Casey Martin was struggling earlier this season, but has now heated up, hitting .299 after Friday, while in the game, going 2-for-3 with a grand slam in the third inning. Casey Opitz had three hits for the Hogs, while Dom Fletcher and Christian Franklin each had two hits to help lead the way.

Upsets of the day

California over No. 1 UCLA

Cal righthander Jared Horn is having a strong season and put together yet another solid performance in a 4-1 road win over UCLA to even that series. Horn struck out 10, walked five and allowed just one run and three hits in eight innings. Cameron Eden led the Cal offense with two hits, while for the Bruins, righthander Ryan Garcia struck out nine, walked two and allowed a run and six hits in six innings of work. With the win, Cal’s RPI is up 10 spots into the 50-ish range. Here they come.

Cal knocks off the No. 1 team in the country, 4-1 #CalBaseball #GoBears pic.twitter.com/B4wqWjsv6F

Duke over No. 24 Clemson

Michael Rothenberg and Ethan Murray each had huge hits in the ninth inning as the Blue Devils knocked off Clemson on the road, 9-8. Rothenberg had a huge day at the plate, going 3-for-5 with four RBIs, while Murray finished the night with three hits and two RBIs. Chase Cheek also put together a two-hit performance, while both teams struggled somewhat on the mound.

Players of the day

What in the world is in the water in Stillwater this weekend? First, Trevor Boone goes bonkers in the series opener with three home runs, then McCusker goes off the chain Friday night in a 10-2 win over Texas to clinch that Big 12 series. McCusker hit a home run, double, had four hits and knocked in a whopping six runs in the victory. How about this? OSU has outscored Texas 25-2 in two games — with the Longhorns suddenly in a little trouble from a postseason standpoint.

Bases FOC… Not anymore! @carson_mccusker delivers a grand slam to double the #okstate lead in B6. ? #GapBand #okstate #GoPokes pic.twitter.com/S1R8kxA3vp

Well, here’s one way to get your name in the record book. Silva struck out two, walked two and allowed a run in seven innings in a 4-1 win over UMass. Oh yeah, he also threw a no-hitter to lead the Black Bears to victory. As if this game wasn’t crazy enough, the Black Bears actually trailed 4-1 in the bottom of the ninth until Ryan Turenne hit a walk-off grand slam — his first home run of the season — to win the game. It was a historic day for Turenne, and of course, Silva.

• No. 10 UC Santa Barbara continued their impressive ways in a 7-0 series-clinching home victory over UC Davis. Lefthander Jack Dashwood put together yet another terrific performance, striking out five, not walking anyone and allowing three hits in a complete game performance, while Tommy Jew led the offensive charge — he had a double and a home run and knocked in two runs.

• No. 25 Tennessee is getting close to that .500 mark in SEC play after a dominant 16-1 series-clinching triumph over rival Kentucky. Andrew Lipcius hit a home run to help pace the Vols offense, while Ricky Martinez had two doubles and knocked in two runs and Connor Pavolony tallied two hits and knocked in three runs. UT also got a nice performance from Garett Stallings, who struck out eight, didn’t walk anyone and allowed just a run on six hits in seven innings.

• No. 5 Georgia continued to play at an incredibly high level Friday night in a 5-2 win over No. 21 Missouri. Georgia starting pitcher C.J. Smith allowed two runs and six hits in four innings, while the bullpen was terrific with Cole Wilcox tossing four shutout innings and Aaron Schunk struck out two in a shutout inning to finish the game. Tucker Maxwell hit a home run for the Bulldogs, while LJ Talley was outstanding with two doubles and two RBIs.

• No. 4 Stanford scored five runs in the first inning on the way to a 20-5 series-clinching road victory over Oregon. Maverick Handley, Brandon Wulff and Andrew Daschbach each had a home run and double to lead the offensive charge, while Brandon Dieter hit a home run and Nick Brueser had two hits and three RBIs. Also worth noting, while two-way talent Will Matthiessen had a double at the plate, he also helped his own cause on the mound with a run allowed in five innings.

• No. 19 TCU used a six-run third inning to take down Kansas State 8-1 to even the series. Andrew Keefer walked twice, Austin Henry had two hits and leadoff hitter Hunter Wolfe had two hits and an RBI to lead the offensive charge. Meanwhile, righty Charles King was terrific, striking out six, walking two and allowing a run and six hits in a complete game performance.

• No. 6 Vanderbilt got into a small early hole against Alabama, getting down 2-1 in the second inning after Joe Breaux hit a two-run home run. However, the Commodores rallied and took care of business, 7-4. JJ Bleday hit a home run in the first, while Ethan Paul had a solid night at the plate, going 3-for-5 with two RBIs. Philip Clarke also had three hits, while Ty Duvall chipped in a two-hit performance.

• No. 22 Texas Tech got a walk-off single from Cody Masters in the bottom of the ninth to beat No. 18 Baylor 3-2. The series between the two teams has been an absolute dandy so far with the Bears winning a nail biter on Thursday. Tech returned the favor on Friday. Masters finished the night with two hits, while Micah Dallas allowed just two runs in six innings and Taylor Floyd struck out two in three shutout innings. Meanwhile, Baylor’s Paul Dickens struggled with his command, but still only allowed just a run and two hits in six innings.

• No. 15 Ole Miss rebounded from a series-opening loss to Auburn with a 5-3 triumph on Friday. Tyler Keenan had a nice night at the plate, hitting an insurance run home run in the ninth, while also finished the night with two hits. Kevin Graham also had two hits for the Rebels, while the Ole Miss performed at a high level with Austin Miller tossing two shutout innings and Parker Caracci striking out four in two shutout frames.

• No. 16 Arizona State had a wild one in the series opener, but made things less interesting with a nice 8-5 win over Utah on the road to clinch another important Pac 12 series. Gage Workman had a strong night at the plate with three hits and an RBI, while Drew Swift had two hits and two RBIs. On the mound, Boyd Vander Kooi struck out five, walked two and allowed four earned runs on 10 hits in a complete game performance.

• No. 14 LSU got rolled by Florida in the series opener on Thursday, but boy did the Tigers return the favor Friday in a 13-1 route in Baton Rouge. LSU had seven players chip in multi-hit performances, with Cade Beloso tallying three hits, including a home run, and Daniel Cabrera hitting a three-run home run. LSU freshman righthanded pitcher Cole Henry put together yet another dominant start, striking out 12, walking no one and allowing a run and four hits in 5.1 innings of work.

Home run No. 7️⃣ on the year for @Daniel2cabrera! #GeauxTigers?

• Troy’s Cory Gill didn’t go the distance because of his pitch count (114) total pitches, but he put together a strong start in a 9-1 win over Appalachian State. Gill struck out 11, walked three and allowed just one run and five hits in 5.2 innings.

• Valpo’s Jon Tieman put together a dominant start in an 8-0 win over SIU-Edwardsville. Tieman struck out 12, walked five and allowed two hits in six shutout innings.

• Northeastern’s David Stiehl had a night to remember in a 7-0 win over College of Charleston. Stiehl struck out six, didn’t walk anyone and allowed just three hits in a complete game performance. He threw 105 pitches in the victory.

• Rutgers’ lefthander Harry Rutkowski tossed an absolute gem in a 2-0 win over Purdue. Rutkowski struck out 12, walked two and allowed just six hits in eight shutout innings. RU, by the way, is now sitting at 6-4 in the Big Ten.

• St. John’s leadoff hitter Mike Antico had an insane day in a 24-6 win over Villanova, just a day after the Wildcats knocked them off. Antico had three homers, a double and finished the afternoon a perfect 4-for-4 with seven RBIs.

• Saint Louis starting pitcher Cody Luther tossed the program’s first no-hitter since 1961 last week. Now he’s back at it again, striking out 11, walking just one and allowing a run and four hits in eight innings in a 4-1 road win over Fordham.