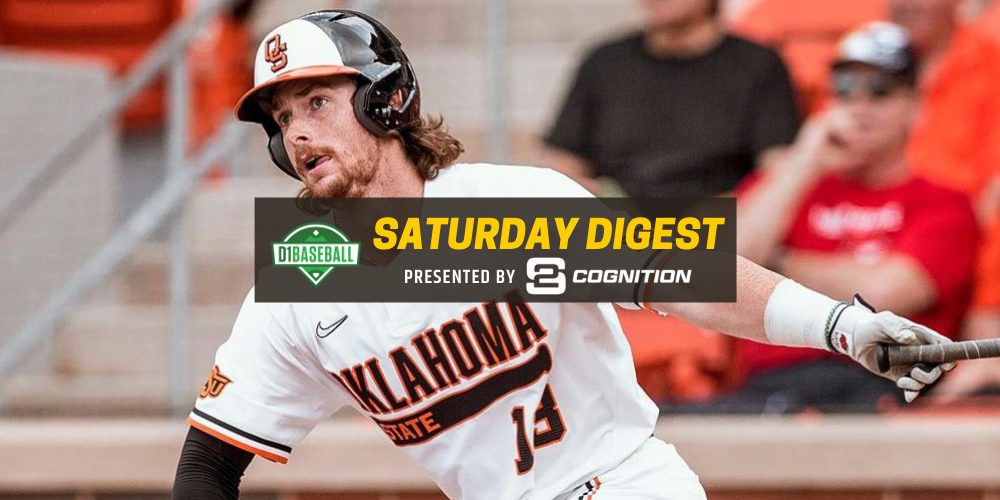 * Oklahoma State hit the road and won a huge Big 12 series over Texas with a dominant 14-3 triumph on Saturday. OSU righthanded pitcher Bryce Osmond was moved a day up in the weekend rotation this weekend, and he answered the call with six strikeouts in 5.1 innings of work. Osmond actually took a perfect game into the fifth. As for the OSU offense, Nolan McLean had another big day with a home run, while David Mendham hit his second home run of the weekend and Jake Thompson and Griffin Doersching each added homers — Doersching hit a huge three-run bomb to get the offense rolling. With the win, OSU moves to 12-5 in the Big 12 while Texas is suddenly sixth in conference by percentage points.

• Samford recorded one of the weekend’s bigger upset series wins, dominating No. 25 Wofford, 11-3, to take the series on Saturday. Michael Ross gave the Bulldogs a strong start, allowing just two runs in six innings ,while Alex Goff earned his first save with just a run allowed in three innings. Samford’s Towns King, Stephen Klein and Will Davis each hit a home run in the game.

• Speaking of upset series wins, how about UAB taking down No. 4 Southern Miss, 3-2, to clinch a massive home series win? Casey Dunn continues to do a solid job in his first season with the program. UAB’s Leo Harris put together a strong start, striking out four and allowing just two runs and two hits in six innings, while Jonah Smith and Aidan Moza were terrific out of the pen. The series loss to the Blazers could have serious consequences for USM’s top eight hopes with the RPI dipping into the lower teens as a result.

• Texas A&M moved into strong position for a regional host with a road series win over Vanderbilt with a 12-4 triumph Saturday afternoon. A&M starting pitcher Brad Rudis only lasted an inning, but the bullpen rose to the occasion with lefthander Moo Menefee striking out nine in 5.1 innings of work. Offensively, Ryan Targac led the way for the Aggies with two homers and six RBIs, while Troy Claunch had a huge day at the plate, too, with four hits and four RBIs. With the series win, the Aggies have won three-straight SEC series over Vandy, Arkansas and Georgia.

• Coastal Carolina is moving heavily into the at-large discussion after taking a road series from Georgia Southern with a 6-4 win Saturday afternoon. Michael Knorr allowed just one earned run in five innings while Elliott Carney was terrific in relief with just a run allowed in three innings. Dale Thomas and Matt McDermott each had two hits for the Chants, while Tyler Johnson had a home run and three RBIs. With the series win, Coastal’s RPI is up to 56 and it is right behind the Eagles in the Sun Belt standings.

• Georgia Tech added yet another impressive series win to its resume on Saturday with a 7-5 triumph over Miami. Every run in this game was scored before the sixth inning, and that means Tech’s bullpen shined late in the game, thanks to Sam Crawford and Zach Maxwell. Maxwell closed out the game with a fastball up to 98 mph along with a slider up to 89 mph. Kevin Parada hit home run No. 23 for the Yellow Jackets, while Drew Compton finished the night with a hit and two RBIs. Tech’s 15 wins over Top 50 teams ranks second nationally behind No. 1 Tennessee.

• Florida State picked up another important series win at home with a 7-3 triumph over TCU. FSU lefthanded pitcher Carson Montgomery allowed three runs on eight hits in 4.1 innings of work, while Wyatt Crowell was outstanding out of the bullpen with six strikeouts and just a hit allowed in 4.2 shutout frames. Brett Roberts, James Tibbs and Logan Lacey each hit homers for the Seminoles. FSU’s RPI is up nine spots this week, climbing to 10 by the end of Saturday.

• Louisville cooled off a Clemson club that had just started to get hot. Clemson had won back-to-back ACC series from Wake Forest and Florida State, and crushed Wofford in midweek action. But the Cardinals won the series opener 7-2 on Friday before clinching the series with a 10-8 triumph on Saturday. Logan Beard, Jack Payton and Cam Masterman each knocked in a pair of runs for the Cards. With a strong week, the Cards are +11 in the RPI since last week — up to 29.

• It was only a couple of weeks ago that Alabama looked like a stone-cold lock to make the postseason, but it is clearly trending the wrong direction after losing against to South Carolina, 11-5, to drop that road series in Columbia. Andrew Eyster had a massive day at the plate for the Gamecocks with a home run, three hits and six RBIs, while Braylen Wimmer added a three-hit performance. The two teams are now deadlocked at 9-12 in the SEC — Alabama’s RPI is now sitting at 49, while South Carolina is at 63.

• I’m sure it’s just a coincidence, but Dallas Baptist has now lost three-straight Missouri Valley series — two of those after the announcement that it would be joining Conference USA after this season. DBU lost another series on Saturday in a 5-2 setback on the road to Illinois State. Derek Salata struck out five and allowed a run and a hit in five innings, while Redbirds reliever Colin Wyman was terrific, striking out seven and allowing just a run in four innings. DBU is now 5-6 in the MVC … with an RPI of five. Makes sense.

• UC Santa Barbara likely secured the Big West as a one-bid league in the postseason with a road series win over Cal Poly. With the win, the Gauchos are now 5 1/2 games ahead of second place and six games ahead of Cal State Fullerton. UCSB starting pitcher Michael Gutierrez allowed three runs on five hits in 6.1 innings of work, while Giani Bloom hit a home run and Nick Oakley finished the afternoon with three hits and three RBIs (two doubles).

• Ball State and Central Michigan have been sizzling hot the past few weeks, so something had to give when they two met up in Muncie this weekend. Well, the Cardinals came to play, leading off the series on Friday with a win before sweeping a doubleheader on Saturday to clinch a series win. BSU won the first game of the DH, 6-4, with Zach Lane hitting a home run and Hunter Dobbins having two hits and two RBIs. The Cards secured the series win with a 10-7 triumph in the nightcap. Zach Cole, Hunter Dobbins and Trenton Quartermaine each hit homers (Cole knocked in four runs) to lead the way.

• Auburn evened up its road series against Tennessee with an 8-6 triumph. The Tigers were pummeled late in Friday’s game, and put together an impressive response in the second game. Bobby Peirce hit a three-run home run in the ninth inning to propel AU to victory, while Kason Howell had two hits and two RBIs. Sonny DiChiara also hit a home run and knocked in two runs. He also drew three walks. All eyes are on Sunday’s rubber match between two hard-nosed clubs.

• Georgia scored eight total runs in its final four at bats in a 12-7 win over LSU. Cory Acton, Connor Tate and Parks Harber each hit two homers for the Bulldogs, while Jack Gowen was terrific out of the bullpen with three strikeouts in three no-hit innings. Though it wasn’t a great day for the LSU pitching staff, which used seven arms in the loss, Jacob Berry had a solid day with a three-run home run and two hits.

• Arkansas got a walk off three-run home run from Kendall Diggs to take down Ole Miss, 6-3. It was a slow night for the Razorbacks’ offense for much of the way, but Diggs hit that huge home run and Brady Slavens and Braydon Webb each hit home runs as well. Arkansas righthanded pitcher Brady Tygart came out of the bullpen and was terrific as usual with two strikeouts in two shutout innings.

• Oregon State dropped the series opener to Utah on Friday, but bounced back in impressive fashion, 9-1, on Saturday to force a decisive series finale. Jacob Kmatz struck out five and allowed a run on five hits in five innings of work, while offensively, Matthew Gretler hit a home run, Justin Boyd had two hits and Jacob Melton had a three-hit, three RBI performance.

• The series between Louisiana Tech and Old Dominion could have sizable ramifications at the end of the season. Tech lost the series opener on Friday but bounced back Saturday with a 10-5 win. Jorge Corona hit a home run, tallied three hits and knocked in three runs, while Taylor Young put together a big-time showing with three hits and two RBIs.

• Just a day after dropping a home game to Boston College, Notre Dame left zero doubt in Saturday’s game — an 11-5 win over the Eagles. The Irish scored eight runs in the first inning to set the tone. Jack Brannigan went a perfect 4-for-4 with a home run and three RBIs, while Zach Prajzner hit a grand slam in the first inning.

• You can read much more about Virginia’s big win, here, but the Cavaliers responded nicely from Friday’s setback with a strong showing, 6-3 win, on Saturday — a day in which the program honored legendary former Cavaliers slugger Ryan Zimmerman. Virginia’s Brian Gursky struck out eight and allowed just two runs on five hits in six innings, while Brandon Neeck impressed out of the bullpen with four strikeouts and just one run/one hit allowed in three innings. The series finale between these two teams should be an absolute dandy.

• Tulane scored four runs in the final two innings to even the series against UCF with a 7-5 win. Brady Marget had two hits and three RBIs for the Green Wave, while Jackson Linn and Bennett Lee each had two hits. The two teams enter Sunday’s series finale tied with Houston for second place in the American — just one game behind East Carolina.

Let’s give a big shoutout to Rutgers hard-hitting slugger Ryan Lasko, who hit not only one or two home runs, but three in a dominant 13-3 win over Ohio State. Lasko finished the game with a double and four hits as the Scarlet Knights responded well from last weekend’s series loss to Iowa.