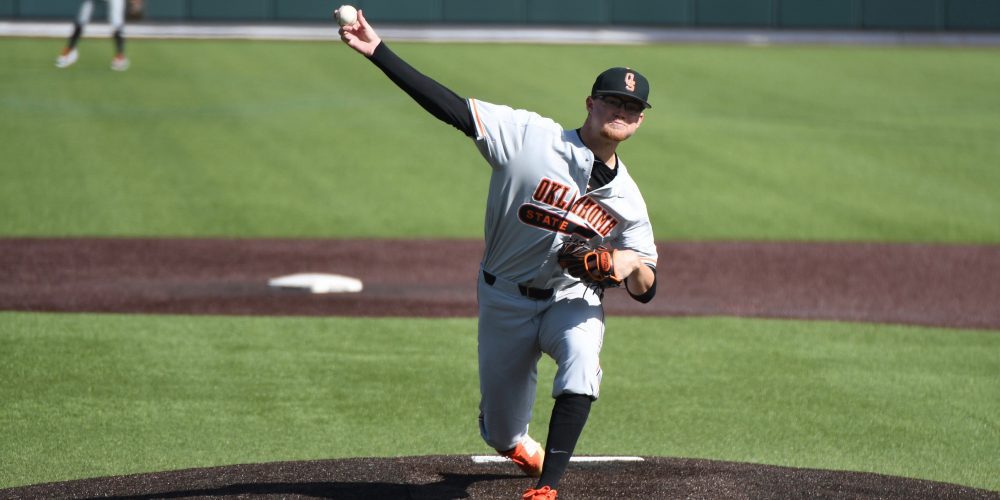 While there are some dud non-conference matchups out there this weekend (Georgia Tech-Western Carolina, anyone?), that is not the case in the Pacific Northwest where Oklahoma State is in Corvallis this weekend. The Pokes need to surprise this weekend to get back into the hosting discussion, and righthander Jensen Elliott helped his club make a huge impression Friday in a 1-0 triumph. The Cowboys out-hit the Beavers 9-2, as Elliott struck out four, walked two and allowed just two hits in seven shutout innings. Peyton Battenfield was terrific out of the bullpen, striking out three in two shutout innings, while the Beavs wasted a great showing from lefty Brandon Eisert, who struck out eight and allowed a run in eight innings.

How good of a night was it for Elliott and the Cowboys? Even Adley Rutschman had an 0-for-3 performance with a strikeout.

In our latest regional projections earlier this week, we had Indiana State slightly in over Illinois State with Dallas Baptist our automatic bid out of the MoValley. Well, the Redbirds won the series opener over the Sycamores, 4-3, Friday night, with the game-winning run coming on a wild pitch followed by a throwing error. That’s one way to lose a game if you’re the Sycs.

How about this, though? Despite the win, the Redbirds scored just four runs on 17 hits. That’s called scattering hits. It’s also called leaving way too many runners on base — 11 to be exact. Brent Headrick put together a strong start on the mound, striking out nine, walking two and allowing three runs and five hits in the complete game performance, while at the plate, Joe Butler had four hits, Gunner Peterson had three hits and three RBIs and Joe Aeilts finished the night with three hits as well.

LSU coach Paul Mainieri made the decision earlier this week to move righthander Zack Hess back to the bullpen, where he earned his reputation two seasons ago. LSU sophomore righthander Ma’Khail Hilliard gave the Tigers a strong start in an 8-3 win, striking out four and allowing two runs on six hits in four innings, while Hess was outstanding in his new but familiar role, striking out seven, walking one and allowing a run and three hits in four innings.

Offensively, Daniel Cabrera hit a huge home run while Josh Smith went 3-for-4 with two RBIs. However, the biggest blast of the night came in the eighth inning when LSU pinch hit for freshman Drew Bianco, the son of Ole Miss head coach Mike Bianco. Drew saw the first pitch well and hit an absolute mammoth shot off the left-field foul pole. He also had a nice bat flip to put a little icing on dad’s cake, so to speak.

Take a look at the end of this video. Dad doesn’t look pleased …

Off the bench, first pitch, no problem for @DrewBianco8! pic.twitter.com/p2uGpO3vdB

There’s no doubt the Fighting Illini got off to a slow start in Big Ten Conference play, but boy they’ve been hot the past few weeks. The Illini improved to 9-7 in the league Friday night with a dominant 4-0 win over Indiana at home.

With the win, the Illini are one step closer to getting into the hosting discussion. Yes, the league record must continue to improve. But the Illini are up to 20 in the RPI with a strong 10-4 mark vs. RPI Top 50 teams. Keep an eye on Dan Hartleb’s club. They’re sizzling hot.

Do it yourself, Fish! Eight shutout from @andfisher8. #Illini 3, Indiana 0 | MID 8 pic.twitter.com/wVu7IdLN7x

The Horned Frogs need nothing short of a miracle to get into the NCAA tournament, but they took at least one step forward Friday night by beating red-hot West Virginia, 14-5, and scoring 10 runs in the seventh inning in the process.

So, who was the key to the offensive onslaught? TCU outfielder Johnny Rizer hit two home runs, while Conner Shepherd had three hits, two of them doubles and two RBIs and catcher Zach Humphreys had a big night, too, with two hits and three RBIs.

TCU has much more work to do moving forward. Its RPI is up to 10 spots. That’s the good news. The bad news? The RPI is still sitting at 82.

1. UCLA keeps on keepin’ on

Can anybody stop UCLA? The Bruins have maintained a stranglehold on the No. 1 spot in the D1Baseball rankings for seven straight weeks, and they have already won four weekend series against teams currently ranked in the D1Baseball top 10. Even going on the road doesn’t faze UCLA, which won the opener of a big Pac-12 showdown series at Arizona State, 3-2.

B6 | Another 1-2-3 inning, another pair of strikeouts, and Ryan Garcia has now sent down eight consecutive batters.

This game was tied 1-1 until the seventh, when a Noah Cardenas infield single put UCLA ahead. The Bruins tacked on another run in the eighth on a sacrifice fly and held on for the victory, as ace Ryan Garcia (7 IP, 6 H, 2 ER, 2 BB, 8 K) and closer Holden Powell (2 IP, 0 H, 0 R, 1 BB, 4 K) limited ASU’s explosive offense to six hits. Our Shotgun Spratling was on hand at Phoenix Municipal Stadium and will have a full report.

2. Upset of the Day: Pitt over Florida State

Mike Martin’s final ACC home series got off to an inauspicious start, as former Martin assistant Mike Bell and his Pittsburgh Panthers shellacked the Seminoles 10-0 in Friday’s series opener. The FSU offense was shut out on just six hits by Derek West (7 IP, 5 H, 0 R, 1 BB, 9 K) and two relievers. FSU lefty Drew Parrish (5 IP, 6 H, 3 ER) took the loss, and Pitt piled on against the Florida State bullpen, adding a five-spot in the ninth against Clayton Kwiatkowski. Nico Popa (3-for-5, 3 R, 4 RBI) and Bryce O’Farrell (3-for-5, R, 2 RBI) led the offense for Pitt, which improved to 17-28 overall and 5-17 in the ACC. For an FSU team riding the at-large bubble at No. 57 in the RPI, this was a very bad loss on its home field.

Iowa was the final team in our projected field of 64 this week, and the Hawkeyes surely knew they had to win their home series against No. 25 UC Irvine this weekend to stay on the right side of the bubble. They got off to a great start Friday, earning a 6-3 victory against first-team preseason All-American Andre Pallante (6 IP, 6 H, 4 ER) and the Anteaters. Cole McDonald (7 IP, 5 H, 2 R, 1 ER, 2 BB, 5 K) bested Pallante, and Izaya Fullard went 3-for-3 with two homers and three RBIs to support him. An RBI double from Austin Martin highlighted a two-run eighth to help Iowa pull away late.

The win helped Iowa jump 10 spots to No. 51 in the RPI — which had been the biggest blemish on its otherwise impressive at-large resumé. Another win this weekend to secure the series would be enormous, considering some of the RPI-draining games that loom on the schedule after this weekend.

Florida Atlantic entered the weekend just outside our field of 64 projection, needing a series win at Conference USA leader Southern Miss to bolster its resumé. The Owls got off to a robust start to the weekend, taking down the Golden Eagles 8-5 in Hattiesburg. The game was tied 4-4 after seven innings, but FAU took the lead in the eighth on Andru Summerall’s RBI single, then added three more crucial insurance runs in the ninth on Eric Rivera’s two-run single and Diamond Johnson’s pinch-hit RBI single.

The win valuted FAU 14 spots to No. 38 in the RPI (one spot ahead of Southern Miss), and improved its top-50 record to 3-5. It also brought the Owls within one game of USM in the standings at 16-6. If FAU can take another game to win this series on the road, it will surely find itself on the right side of the at-large bubble heading into the final two weeks of the regular season.

Beleagured South Carolina actually got off to a good start Friday against No. 4 Vanderbilt, jumping out to a 5-1 lead after two innings. But it didn’t take long for the Commodores to assert their will. Vandy erupted for seven runs in the fourth inning to take the lead, but the Gamecocks bounced back with three in the bottom of the frame to tie it. Then Vandy delivered a knockout blow, posting a nine-spot in the sixth and a five-spot in the seventh en route to a 22-11 victory.

The Commodores have now scored 43 runs in their last two games (following a 21-10 midweek win over Tennessee Tech), and they extended their winning streak to eight games with Friday’s victory. Heading into the weekend, Vandy led the SEC and ranked third nationally in batting (.318), and ranked second in the league and ninth in the nation in scoring (8.4 runs per game). Friday provided another reminder of just how difficult that VU offense is to slow down once it gets rolling.