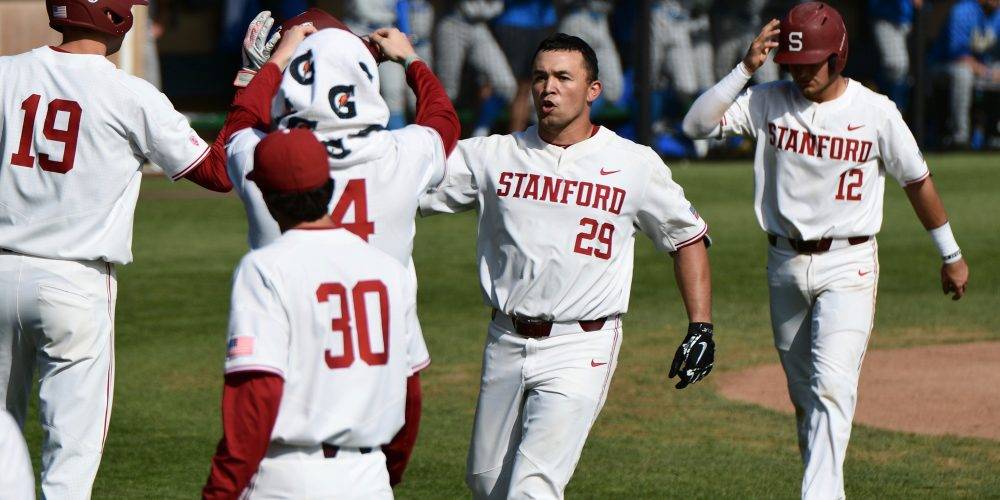 The talented Jackets lefthander had a performance to remember in a 2-0 win over Pittsburgh. Thomas struck out nine, walked one and allowed just two hits in the complete game shutout performance as the Jackets clinched the series win over the Panthers.

With an Arkansas loss to Texas A&M and a 12-4 road win over Kentucky, the Commodores clinched yet another SEC regular season championship. JJ Bleday, Ethan Paul and Stephen Scott each hit home runs in the win, while Philip Clarke had two doubles to log conference win No. 22.

The @VandyBoys are SEC CHAMPS ? pic.twitter.com/FZPgSmtaJC

Here come the Gators? UF entered the weekend against Missouri needing a miracle to make the postseason. Well, Kevin O’Sullivan might just be the wish giver, as the Gators clinched a road series win over Mizzou with a 2-0 victory. Sophomore righthander Jack Leftwich was outstanding against the Tigers, striking out nine, walking two and allowing just two hits in the complete game performance. UF is now 12-17 in the league and has more work to do, but this was a step forward.

The Cowboys have been phenomenal the past three weeks. First, they swept Oregon State on the road, then they took a series from Oklahoma last weekend. Now, the Pokes have secured a series win over Baylor with a 5-4 triumph on Friday. OSU righthander Jensen Elliott struck out five, didn’t walk anyone and allowed just four runs in a complete game performance.

The Cardinal remains tied for first place in the Pac 12 with UCLA after taking down Oregon State, 8-5, Thursday night. Brandon Wulff put together a strong offensive performance with a home run, two hits and an RBI, while Andrew Daschbach had two triples and three total hits and Duke Kinamon, Christian Robinson and Kyle Stowers each chipped in two-hit performances.

Now THAT's a Friday-night win! @brandon_wulff ties Andrew Daschbach (2018) for the most homers in a season since Sean Ratfliff hit 22 in 2008. ? #GoStanford pic.twitter.com/krcohKLVwt

The Tigers entered the weekend with something to prove to nail down a host site. Well, the Tigers helped their case against Auburn, beating AU 5-1 to clinch a series win and to move closer to hosting. LSU freshman righthander Landon Marceaux put together a strong start, striking out seven and allowing just one run and two hits in seven innings, while Zack Hess tossed two shutout frames to end the game. While LSU is in good shape, Auburn now sits at 13-17 in the SEC and needs to win the series finale.

The Aggies kept their hosting hopes alive Friday afternoon in a 6-2 triumph over Arkansas to even the series. A&M lefthander John Doxakis put together a solid start, striking out eight, walking two and allowing two runs and six hits in 5.2 innings, while Bryce Miller and Joseph Menefee each tossed 1.2 shutout frames to beat the Hogs. A&M now sits at 15 SEC wins and would be in good shape RPI-wise with another win this weekend. Now they have to find a way to close the deal.

We have a visual on the leadoff ? by @bradenshewmake!

Jim Penders’ club headed to the Big Easy this weekend with something to prove. They were a game under .500 in the American and needed some wins. UConn won the series opener over Tulane before clinching a series victory with a 10-6 triumph on Friday. Pat Winkel put together an impressive offensive performance, going 3-for-5 with three RBIs, while David Langer and Anthony Prato each chipped in three-hit performances. UConn now sits at 12-11 in the AAC with an RPI up to 25.

What a day it was for the Rattlers at the MEAC tournament. They defeated Delaware State earlier in the day before surprising some with a 6-2 win over North Carolina A&T. Josh Wilson allowed two runs in five innings, while Kaycee Reese had three hits and three RBIs. FAMU must now beat Norfolk State twice to win the MEAC automatic bid.

The Black Knights have a leg up in the Patriot League title series, shocking many by beating Noah Song and the Midshipmen 6-2 on Friday. Song allowed five runs on nine hits in seven innings, but still managed to strike out 11 and walked just one. Sam Messina allowed two runs in six innings for Army, while Anthony Giachin hit a double and knocked in five runs.

The Huskers dropped the nightcap to Michigan but did what they needed to do against the Wolverines this weekend, winning the first game on Friday, 7-0. Nate Fisher had some command issues at times but struck out seven and allowed just two hits in six shutout innings, while offensively, Jaxon Hallmark and Aaron Palensky each hit home runs, with Hallmark knocking in three runs. NU is up to the mid-30s from an RPI standpoint with a strong league record. It’s looking good to be an at-large team.

Fresh off a series loss at Nebraska, the Sun Devils needed to reestablish some momentum against California Friday night. They did just that, beating the Golden Bears 6-5 in 11 innings after Spencer Torkelson hit an RBI single in the top of the 11th. Torkelson also hit a solo home run earlier in the game, while finishing the night with four hits. Carter Aldrete and Alika Williams each had two hits, while Andrew Vaughn hit a home run for Cal.

He has a home run in 1️⃣0️⃣ straight weekend series. Devils within 4-3. pic.twitter.com/zTiuwk2i73

The Rebels have been an absolute mess since the road series win over LSU. Ole Miss got swept by Mississippi State last weekend, blew a game against Arkansas State earlier this week and lost the series opener to Tennessee on Thursday. The Rebels lost the series to the Vols in a 7-5 setback, dropping to 15-14 in the SEC. Ole Miss used six pitchers against the Vols, and likely saw its hosting chances come to an end as a result of the loss.

If the Illini want to host, they had no margin for error entering this weekend’s series against RPI killer Michigan State. The Spartans, for the second-straight weekend, played spoiler, beating the Illini 5-2 to even the series. Ty Weber allowed four runs in four innings for the Illini, while for the Spartans, Mitchell Tyranski struck out seven and allowed just two runs in a complete game performance.

Tom Walter’s club entered the weekend needing some conference wins but are in more trouble from a postseason standpoint after losing two straight games to Clemson to drop to 13-16 in the ACC. Wake made things interesting with eight runs the final two frames but were unable to complete the comeback. In addition to their conference record, the Deacs also are down to 62 in the RPI. They’ll need to win the series finale and make some noise in Durham to make the field.

Series wins over LSU and Texas Tech now seem like an eternity ago for David Pierce and the Longhorns. Texas had one of the more surprising collapses we’ve seen in a while, finishing dead last in the Big 12 and failing to reach the Big 12 tournament after splitting a doubleheader with Oklahoma, losing the front-end of the doubleheader, 13-0. While it was a rough day for the Longhorns, OU helped its postseason case with a series win. OU still has more work to do, however, with an 11-13 Big 12 record entering OKC.