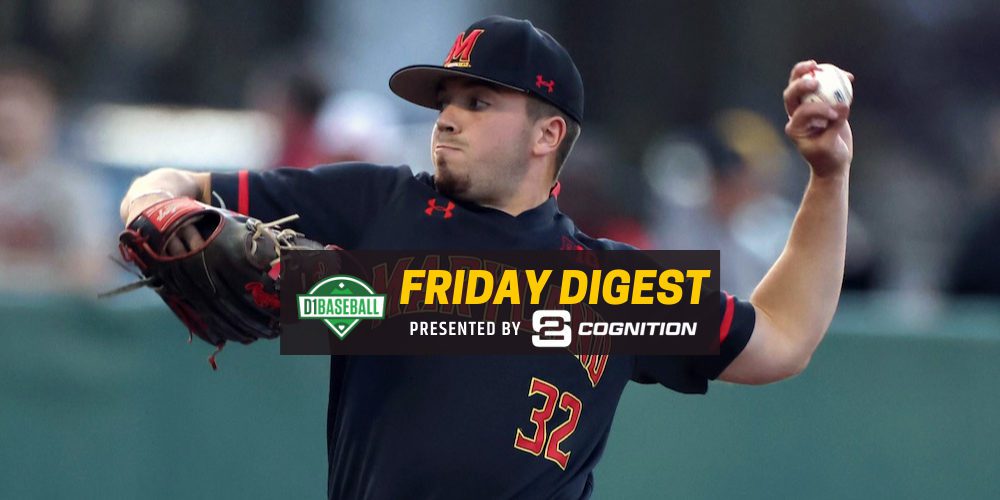 Being perfect is hard. Maryland’s Ryan Ramsey had one of those nights when life went his way. In his first Friday night start, the 6-foot, 195-pound southpaw Ramsey was a perfect 27 up and 27 down. He struck out 10 in the process as his Terps beat Northwestern 13-0. Earlier this season, Ramsey had allowed one hit each in consecutive six-inning starts against Cornell and Siena. Last weekend at Illinois, he allowed seven hits in six innings. But Friday night against the Wildcats, Ramsey was unhittable.

Here’s a great note from ESPN’s Jeremy Mills: Ramsey’s perfect game is the third in the past eight days. Since the NCAA started tracking these stats in 1957, there have never been more than two perfect games in a season.

Although they only needed one, the Terrapins hit four home runs in the win with Chris Alleyne, Nick Lorusso, Maxwell Costes, and Bobby Zmarzlak all homering in the 17-hit attack.

A bad night to be a favorite

Georgia Tech did what few teams have done this season: shut down the Miami lineup. John Medich, Dawson Brown, and Zach Maxwell combined to hold the Hurricanes to six hits in a 3-1 Yellow Jacket victory. Kevin Parada and Andrew Jenkins each homered in the victory. Carson Palmquist pitched well for Miami but took the loss.

UAB trailed by two runs in the seventh inning before exploding for three in the seventh and three more in the eighth to snap Southern Miss’ 15 game-winning streak with a 10-6 win. Caleb Floyd went 4-for-5 with a home run and three RBIs for the Blazers. Josh Sears added a three-run homer in the eighth to put the game away. Will McGillis led Southern Miss with three hits, a homer, and three RBIs.

Dylan DeLucia turned in another great start for Ole Miss in a 4-2 win at Arkansas. He was excellent last weekend against Mississippi State and stacked that performance with a seven-inning outing Friday night. He allowed eight hits and two runs, but struck out nine and walked only two. Michael Turner had three hits for the Hogs in the loss.

Boston College made the most of its eight hits in a 7-4 upset at Notre Dame. The Irish had 14 hits and struck out a dozen Eagles but dropped the game thanks to 11 men left on base. BC got homers from Barry Walsh and Cameron Leary in the win.

Coastal Carolina took the lead with a three-run fifth inning and hung on for a 5-4 victory over Georgia Southern. Reid VanScoter and Reece Maniscalco combined to strike out a dozen GSU batters and walk only one. Noah Ledford’s three hits led the Eagle lineup. Georgia Southern lost a game in the Sun Belt race after Texas State handled South Alabama 10-2.

Matthew Sox and Zac McCleve combined to lift Utah to a 2-1 upset of Pac-12 leader Oregon State despite the Ute offense getting just three hits. Sox allowed six hits in seven innings and McCleve got the final six outs without allowing a Beaver hit. OSU starter Cooper Hjerpe was good once again in his seven innings (3H/2ER/0BB/9K) but he suffered his first loss of the season after eight victories.

Dallas Baptist dropped its sixth game out of its last nine with a 4-3, 10-inning setback to Illinois State. DBU is now 5-5 in MVC play and despite their lofty RPI, finds themselves in need of wins this weekend to avoid the NCAA bubble. Friday night in Normal, Illinois, DBU clawed back from a three-run deficit to force extras but fell in the tenth on a throwing error.

For seven innings, it appeared Auburn would join the group above in the upset category. In the end, the Tigers suffered a demoralizing setback as ace pitcher Hayden Mullins left in the second inning with an injury and SEC saves-leading closer Blake Burkhalter also left with an injury on a pitch where Tennessee’s Jorel Ortega broke the game open with a grand slam. Tennessee went on to score eight in the seventh and seven in the eighth in a 17-4 victory. Ortega had a pair of homers, as did Evan Russell. For the Vols, it was a reminder of how quickly they can transform a tight game into a laugher. For the Tigers, they are waiting to learn the fates of two of their most important players as they try to regroup to draw even in the series.

Virginia Tech maintained its inspired play with a 5-2 victory at Virginia. Griffin Green and Graham Firoved held the Cavs’ bats in check while Nick Biddison and Carson DeMartini added two hits and a homer apiece in the win. Chris Newell went 3-for-3 with a homer for Virginia.

Oklahoma State scored two runs in the ninth inning to defeat Texas 8-6. David Mendham homered twice and Zach Ehrhard had three hits to the lead the Cowboys. Jake Thompson and Nolan McLean also homered in the win. Skyler Messinger hit a pair of homers for the Longhorns and Ivan Melendez added a 4-for-5 effort with another bomb.

LSU hit three home runs and got a solid six-inning start from Mikhail Hilliard in a 6-2 win over Georgia. Acton had three hits for the Dogs, who outhit LSU 9-8.

Parker Messick showed why teams will not want to draw Florida State in the postseason, especially in game one. The sophomore struck out 14 and did not walk a batter as Florida State beat TCU 10-0. TCU managed just two hits against Messick and none against reliever Ross Dunn in the final two innings. Reese Albert led the FSU lineup with three hits including a pair of doubles that accounted for 5 RBIs. Jordan Carrion added another three hits.

Vanderbilt evened its series with Texas A&M in decisive fashion with an 11-1 win. Carter Holton and Christian Little throttled the Aggies’ bats. Holton allowed four hits and one run in five innings to get the win. Enrique Bradfield and Dominic Keegan each had a homer and a triple apiece, while Tate Kolwyck added three hits with a homer and a double in the win.

How did bubble teams do?

R.J. Yeager hit a pair of home runs in his 3-for-5, five-RBI night as Mississippi State drubbed Missouri 13-4. The Bulldogs got a solid start from Brandon Smith, who logged 7.1 innings. Josh Day led Missouri with three hits. MSU is now 9-10 in SEC play with a chance to get to .500 Saturday.

South Carolina won another one-run game over Alabama 2-1 to clinch the series. Noah Hall allowed only three hits in seven innings while Matthew Becker got the final six outs. Tide starter Jacob McNairy, who lost 3-0 to Georgia last week, pitched seven strong innings with only five hits and a run allowed. Alabama is now 9-11 in SEC play heading into the series finale Saturday. For the Gamecocks, they pick up yet another home series victory to accompany ones with Texas, Vanderbilt, and Ole Miss.

Florida picked up a much-needed victory over Kentucky 9-2. Sterlin Thompson went 2-4 with a home run and four RBIs in the win. Jac Caglianone added three hits for the Gators. On the hill, Brandon Sproat did not allow a run in 5.1 innings. Jacob Plastiak had three hits including a home run for the Wildcats.

Jared Poland struck out 13 in eight shutout innings as Louisville beat Clemson 7-2. Poland allowed only three hits and a walk in the dominating performance. Ben Metzinger had three hits to lead the Cardinal offense while Isaac Humphrey added a pair of doubles. Max Wagner had three of Clemson’s six hits.

Several conferences have their best teams matched up this weekend.

Score round one of the MAC Monster Matchup to Ball State. The Cardinals’ starter Tyler Schweitzer held Central Michigan to one hit over seven innings in a 7-1 victory. Sam Klein capped the one-hitter with two hitless innings for his eighth save. Ball State only had five hits in the game, three by Amir Wright and homers from both Nick Powell and Zach Cole. Ball State is now 20-4 in conference play after handing CMU only its second MAC loss in 23 games. The teams play a doubleheader Saturday and complete the four-game series Sunday.

In a matchup between the two top OVC teams. Southeast Missouri beat Belmont 5-4 in 10 innings. Ben Palmer hit a tenth inning home run for the winning margin as both pitching staffs held the offenses in check.

UCF made a move in the AAC race with a 2-1 win over Tulane. Ben Vespi allowed only two hits and fanned seven in seven innings. Kyle Kramer struck out four in two scoreless innings. Tulane wasted a strong seven-inning start by Dylan Carmouche, who took the loss. The game featured a combined eight hits between the clubs and saw UCF score both of their runs in the seventh to provide the winning margin.

Old Dominion picked up a big victory with a 5-1 shutout over Louisiana Tech. Blake Morgan worked seven innings and allowed only three hits. He struck out eight and didn’t walk a hitter. Jason Hartline capped the shutout with the final two frames. Carter Trice and Andy Garriola homered for the Monarchs, who have won seven of their last nine games. Louisiana Tech has dropped four of its last five games and finds itself on the outside of the NCAA bubble.

In a matchup of Big West powers, UCSB knocked off Cal Poly 10-7 in 11 innings. Gauchos’ starter Cory Lewis allowed only three hits in his 5.1 inning start, collecting nine strikeouts. Blake Klassen had three hits including two home runs, one in the 11th, to lead the UCSB lineup. UCSB has three different three-run innings in the win. The Gauchos scored three in the ninth for a three-run lead, but Poly scored three in the bottom half being helped by a pair of two-out errors, two of its four charged errors in the game. Collin Villegas had three hits to lead Cal Poly.

The top four teams in the SoCon meet this weekend. East Tennessee State has quietly had a strong season. At 25-15 and third place in the SoCon, they get their chance at a Mercer team in second place after their showdown last weekend with first-place Wofford. The Bucs led the game with the Bears early but couldn’t hang on as Mercer scored seven runs in the eleventh inning to win 10-3. Mercer hit three home runs in the win and Jason Kelley worked three more scoreless relief innings to improve to 6-0. Tommy Barth went 3-for-4 with a double and homer for ETSU.

Trailing by in the eighth, Samford rallied with a three-run rally to beat SoCon leader Wofford 5-4. Jacob Cravey worked seven innings for Samford with Brody Westbrooks and Carson Hobbs finishing the game. Ryan Galanie had a homer and three RBIs for Wofford.