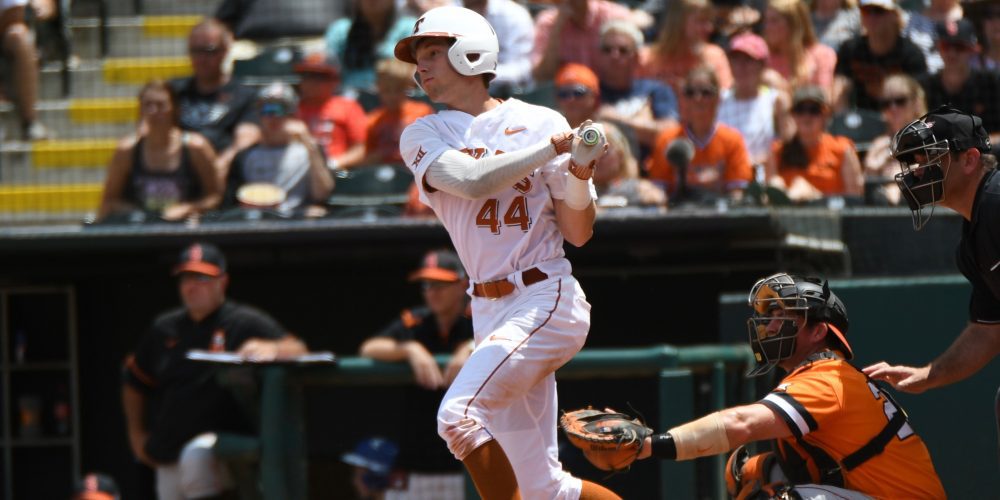 • Few players will hit two grand slams in one season. Exponentially fewer will hit two in one game. And then there’s Santa Clara senior 1B Jake Brodt, who hit two grand slams in the seventh inning alone in the Broncos’ 20-9 win over Boston College. The first came with one out and the Broncos down 9-7; the second pushed the lead to 11. For the game, Brodt went 3-for-5, all three hits leaving the yard, and drove in 10. Not a bad way to start to the year for the club’s most talented hitter.

• Texas clinched a big showdown series against Louisiana with a dramatic 5-3 walk-off win Saturday. The Cajuns had erased a 2-1 deficit with two runs in the top of the ninth, but the Longhorns tied it with a squeeze in the bottom of the frame, then won it on talented sophomore Austin Todd’s walk-off, two-run homer. It was UT’s first walk-off win at home since Mark Payton’s three-run double against Baylor in April of 2014. The walk-off overshadowed a very strong season debut from Texas fireballer Chase Shugart (6 IP, 3 H, 1 R, 0 ER, 0 BB, 3 K).

• In one of the two matchups of ranked teams on Saturday, No. 25 Duke knocked off No. 14 Vanderbilt 5-4 to even up the series. Duke senior RHP Ryan Day was strong for the Blue Devils, getting through six innings of one-run ball. Junior RF Griffin Conine hit a two-run double while junior CF Kennie Taylor picked up the game-winning RBI with a double of his own in the eighth. Sophomore RHP Zach King took the ball for the Commodores, but only went four innings and gave up two runs on four hits. Both teams will be looking for a huge series win on Sunday in Nashville.

• LSU had to fight from behind to overcome a two-run deficit late against Notre Dame on Friday, but with uber-talented sophomore RHP Zack Hess taking the ball Saturday, the Tigers surely felt good about clinching the series. Hess was dominant as a freshman pitching strictly out of the pen, but the transition to the rotation in 2018 didn’t start well. Notre Dame scratched a run across in the top of the first, and then LSU tied it in the bottom of the second on a Beau Jordan solo shot. Everything went south for LSU in the third, when Hess allowed seven runs before getting pulled with one out in the inning. Overall, Hess pitched 2.1 innings, allowing eight earned runs on five hits and six walks en route to a 10-5 loss. It’ll be interesting to see how Paul Mainieri manages his staff if Hess continues to struggle in the rotation with 2017 starter Eric Walker out for the year. For the Irish, meanwhile, it was a loud bounceback from Friday’s dispiriting loss, which saw Notre Dame blow a 6-0 lead. Nick Podkul and Niko Kavadas had two hits and three RBIs apiece to lead the Irish attack.

• We expect Arkansas to be good, and we expect them take care of business against Bucknell. But we don’t expect the Hogs to put up 32 runs. Coming off a 14-2 opening night win, the Razorbacks scored in all but one inning Saturday, putting up at least four runs in five different frames. You could pick just about any hitter to highlight, with six guys hitting home runs and nine players driving in multiple runs. 3B Casey Martin and CF Dominic Fletcher both homered and drove in five, while 2B Carson Shaddy hit his second long ball in as many days and is up to 8 RBIs on the year.

• Fresh off a run to the CWS in 2017, Texas A&M took down Rhode Island easily on opening night. The same can’t be said for Saturday’s game, as the Aggies went into the bottom of the ninth trailing 3-2. After a couple singles and a sac bunt had two runners in scoring position with one out, the Rams brought the infield in to try to cut down the tying run at the plate on a ground ball. The next thing you know, freshman CF Zach Deloach rolled a ball past the drawn-in second baseman into right field, scoring two and pushing the Aggies past Rhode Island to clinch a series win.

• Wichita State has opened the season with 10-7 and 11-2 wins over McNeese State, which is impressive enough, but junior 3B Alec Bohm (No. 29 on our College Top 100 Prospect list) has picked up where he left off a season ago. After two consecutive years of hitting above .300 with more than six homers and 30 RBIs each season, Bohm is 4-for-8 with three doubles, one home run and seven runs driven in already. The Omaha native hasn’t been the only guy to stand out early for the Shockers, as senior C Gunnar Troutwine — owner of one of college baseball’s coolest names – is also 4-for-8 with a pair of doubles and a long ball.

• Kentucky took care of Wofford easily Friday, and the Wildcats swept a doubleheader against USC Upstate on Saturday. Great start, no doubt. The main story for the Wildcats was righthander Justin Lewis’ sterling effort in a 10-3 win in the nightcap. Lewis struck out a career-high nine batters while allowing just two hits and no walks over six scoreless innings. He looks poised for a monster year. Ultra-talented sophomore LHP Zack Thompson, didn’t fare so well in the first game, failing to make it out of third inning. Thompson struck out five and worked around four baserunners in the first two innings, but four walks and three hits for Upstate in the third pushed across five runs and ended Thompson’s season debut much earlier than he’d hoped. His track record is solid, so expect this outing to be a mere blip on an otherwise special 2018 season for the lefty.

• Jacksonville dropped a tight one opening night to No. 22 West Virginia, but the Dolphins pulled off one of the bigger upsets Saturday, taking down the Mountaineers 7-4. Picked to finish third in the Atlantic Sun by our Walter Villa, Jacksonville has shown up early against one of the Big 12’s most talented teams. Sophomore RHP Tyler Santana was phenomenal in his first career start, tossing seven innings, allowing one run on just two hits while striking out seven. The Dolphins bullpen struggled in the final two innings, but the game was already in hand. The Dolphins will have a chance to take an impressive series win on Sunday.

• Junior RHP Pauly Milto bounced between the bullpen and the rotation for Indiana in 2017, but a strong outing against Kansas State on Saturday solidifies coach Chris Lemonis’ decision to pencil him in as a starter. Milto threw six innings of shutout ball, surrendering just one hit while walking two and striking out five in the Hoosiers’ 5-0 victory. Senior RF Logan Sowers homered and drove in two, and freshman LHP Tommy Sommer was dominant in his first career outing, going three shutout innings for the save.

• Well, Saturday was a rough one for Oklahoma. The Sooners got tasked with playing No. 20 South Alabama and Coastal Carolina in a doubleheader, and they dropped both games by one run in extra innings. Game one was back-and-forth the whole way before Jaguars’ senior 3B Paul Russo hit a walk-off single in the bottom of the 12th. In game two against Coastal, the Sooners fell behind early before scoring three unearned runs in the top of the eighth to even it up. Chanticleers’ sophomore 2B Cory Wood singled in the winning run in the bottom of the tenth to end a long and disappointing day for the Sooners.

• UCLA ace Jon Olsen had an appendectomy two weeks ago, but he showed no lingering effects in his season debut Saturday. The junior righthander threw seven shutout innings in a 13-0 win against Portland, allowing just four hits and one walk while striking out seven.

• North Carolina bounced back from an opening-day defeat by clubbing South Florida 12-5 Saturday to even the series. Brandon Martorano’s three-run homer highlighted UNC’s six-run first inning, and Zack Gahagan had a huge day, going 4-for-5 with three RBIs in support of a dominant Tyler Baum (5.1 IP, 4 H, 2 ER, 1 BB, 10 K).

• Arizona coach Jay Johnson said at the end of the fall that he planned to use veteran righty Michael Flynn as the linchpin of his bullpen, but the Wildcats changed course in the preseason and opted to start Flynn on Saturday against Bryant. That decision looks smart, as Flynn threw 5.1 innings of shutout ball, allowing just three hits and a walk while fanning five to lead the Wildcats to a 5-1 win.

• WCC favorite San Diego slugged its way to an 11-8 win against California. Six different Toreros recorded two-hit games as part of a balanced 13-hit attack, and USD took control of the game with a seven-run seventh.