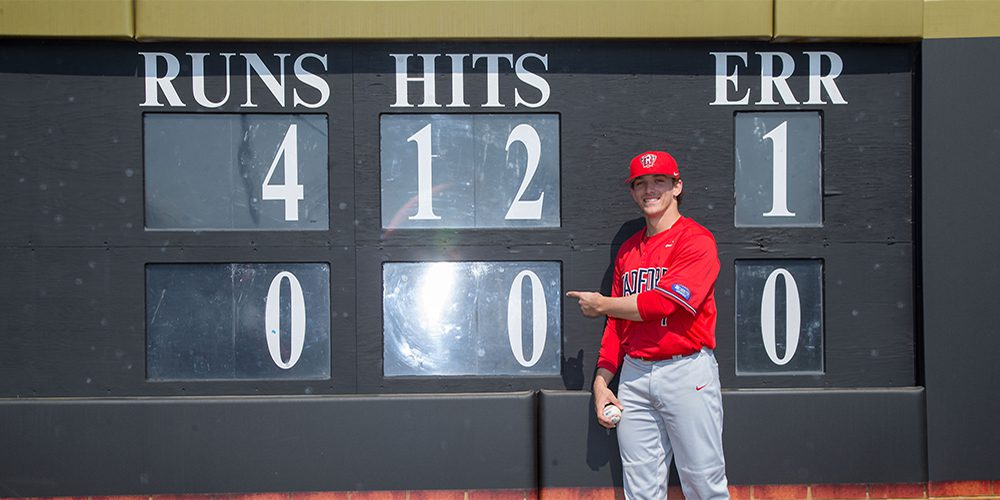 Since dropping a road series at Cal State Fullerton to open the season, Stanford has played very good baseball, reinforcing its status as a bona fide Top 25 club. The Cardinal has allowed more than two runs just once in their past nine games since the Fullerton series, and it won eight of those nine contests. Stanford swept a doubleheader against No. 21 Texas on Saturday, 5-2 and 2-1, to pull off the difficult feat of winning a four-game series against a ranked opponent.

Erik Miller (7.1 IP, 4 H, 2 ER) delivered a strong start in a no-decision in Saturday’s first game, and Stanford tied the game against Kyle Johnston (8.2 IP, 7 H, 2 ER) with a run in the ninth to force extras. Second-team preseason All-American Quinn Brodey delivered a walk-off three-run homer in the 10th to win it. Brodey delivered the game-winning hit again in the nightcap, as his RBI single to center field in the fifth provided the run that proved decisive. Crafty lefty Chris Castellanos (7 IP, 4 H, 1 ER, 0 BB, 8 K) improved to 2-0 in that one, and Colton Hock worked two innings of one-hit, scoreless ball in his second outing of the day (he also threw a scoreless, hitless inning in the first game). Hock was typical Hock, working at 90-93 mph with a plus curveball. 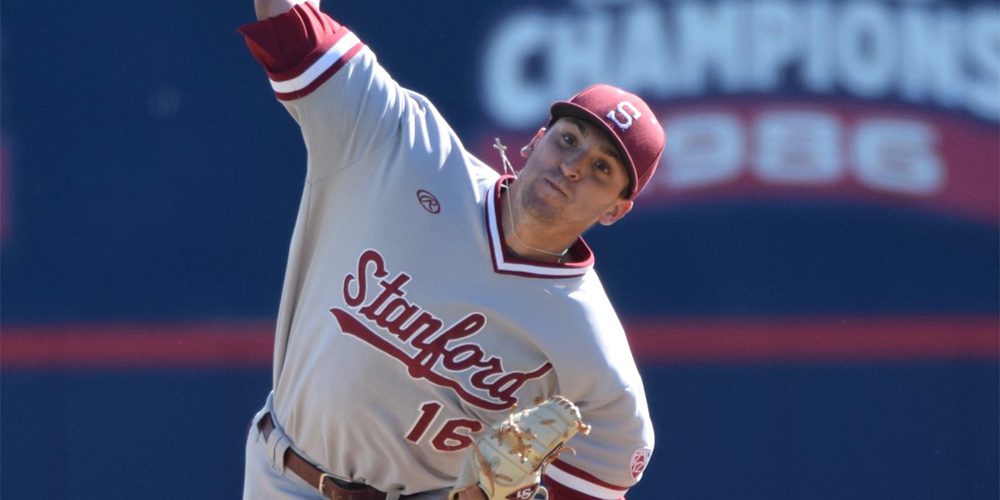 Maryland started the season in the Top 25 but did not look like a Top 25 team during a 1-5 start over the first two weeks. Of course, Maryland’s rigorous schedule deserves some of the blame for that; four of those five losses were against Louisville and LSU. But Maryland did not pitch up to expectations during any of those five losses, so it’s encouraging to see the Terrapins right the ship on the mound this weekend.

After beating struggling Notre Dame 4-3 on Friday, Maryland took down a better ACC team on Saturday, waxing No. 6 NC State 9-2 in Cary, N.C. Taylor Bloom (7 IP, 5 H, 2 ER, 2 BB, 5 K) turned in a strong start for the Terps, and Ryan Selmer followed with two scoreless innings of relief. Madison Nickens went 2-for-4 with a two-run homer and three RBIs, and preseason All-American Kevin Smith had two hits in the No. 8 hole for Maryland. The Wolfpack, meanwhile, has lost three straight games and four of its last five, with all of the losses coming against unranked opponents (Austin Peay, Charlotte, Rhode Island and Maryland).

No. 18 East Carolina has won seven straight games since getting swept at Ole Miss to start the season, and its 7-4 win against previously unbeaten No. 22 St. John’s was its best win of the season. This game was the highlight of the Keith LeClair Classic in Greenville, N.C., and it lived up to its billing. The two teams were tied 3-3 heading into the eighth, when ECU erupted for four runs, highlighted by Turner Brown’s two-run double. In an encouraging development, two key ECU relievers who had gotten off to rough starts, Sam Lanier and Matt Bridges, combined to allow just one run over the final 3.2 innings to nail down the victory.

4. “The Other Gavin” Lifts Titans

With Colton Eastman sidelined, Cal State Fullerton is having to rely upon some other arms. Rather than move lefty John Gavin up a day to Saturday, the Titans started sophomore righthander Gavin Velasquez against Houston, and for the second straight week, Velasquez gave Fullerton a pick-me-up. When Eastman exited after two innings last week, Velasquez earned the win in relief with 5.1 shutout innings against UNLV. In his encore against Houston, Velasquez allowed just three hits over seven shutout frames in a 4-1 victory, leveling the series. Velasquez doesn’t have overpowering stuff, with a mid-80s fastball and a good curveball, but his command took a big jump since his freshman year, and the Titans have won big with “command guys” for a long time. Velasquez has now thrown 17.1 consecutive scoreless innings to start the season, giving the Fullerton pitching staff a major shot in the arm.

5. Is The Tide Turning For Green Wave?

Tulane was one of the biggest disappointments of the first two weeks, starting the season 1-7 with a veteran club. But the Green Wave finally got on track this weekend, taking the first two games of its series against a West Virginia club that rode a six-game winning streak into the weekend (including two wins against Coastal Carolina) and allowed just three runs total in its previous three games. Tulane battered that WVU pitching staff for nine runs in Friday’s series opener, then blanked the Mountaineers 6-0 on Saturday to clinch the series. J.P. France threw seven innings of four-hit, shutout ball to earn the victory, and leadoff man Grant Witherspoon went 2-for-3 with three runs to lead the Tulane offense. It’s not easy to climb out of a 1-7 hole, but Tulane is on its way.

We’ve already had a nice crop of no-hitters so far this season, and you can go ahead and add Highlanders veteran righthander Danny Hrbrek to the list, as he tossed a no-hitter in a 4-0 win over Quinnipiac. It was the program’s first nine-inning no-hitter. They previously had two seven-inning no-hitters and one during a five-inning rain-shortened affair.

Hrbrek, a 5-foot-11, 178-pound, two-way player, struck out eight in the complete game shutout and threw 88 pitches, 63 of them for strikes. He also faced just one batter over the minimum during his memorable performance. The veteran would’ve had a perfect game if not for a throwing error in the bottom of the third inning.

Hrbrek showed quality stuff against Quinnipiac. He sat 90-93 with his fastball and displayed excellent command of the offering, while also snapping off a quality slider.

College baseball is a funny game. Just two weeks after the Dirtbags hit the road and dropped two of three to Oklahoma, they struck back with a vengeance this weekend, clinching a road series win over No. 8 North Carolina with a 4-1 victory Saturday afternoon.

Long Beach State junior righthander John Sheaks put together a quality start, striking out three and allowing a run on four hits in 5.1 innings, while the bullpen did the rest of the work with Zak Baayoun tossing 1.2 shutout innings and Chris Rivera earning his second save of the season with a clean ninth inning that included a pair of strikeouts.

UNC has now scored just seven runs in its last three games, while Luca Dulatri did more than enough to win on the mound, allowing just two earned runs on five hits in six innings.

In Friday’s digest, our Aaron Fitt wrote about Vanderbilt’s inability to win with righthander Kyle Wright on the mound. How about we just expand that to with anyone on the mound? Just a week after dropping three of four games to Towson out on the West Coast, CSUN did the unthinkable on Saturday by clinching a series win over the No. 17 Commodores with a 4-1 triumph.

CSUN redshirt junior righthander Tei Vanderford had an afternoon to remember, striking out eight, walking three and allowing just a run on four hits in a complete game performance.

It’s still early and Vanderbilt has an abundance of talent. However, there’s no doubt that back-to-back series losses to Illinois-Chicago and CSUN is raising some eyebrows nationwide.

How about the state of baseball in Louisiana? LSU and UL Lafayette continue to roll along at an impressive clip, and now you have the Bulldogs taking care of business so far this season. Lane Burroughs’ squad parlayed a midweek split at home against Arkansas into an impressive series win over surging Wichita State, blasting the Shockers 15-1 to clinch the series on Saturday. 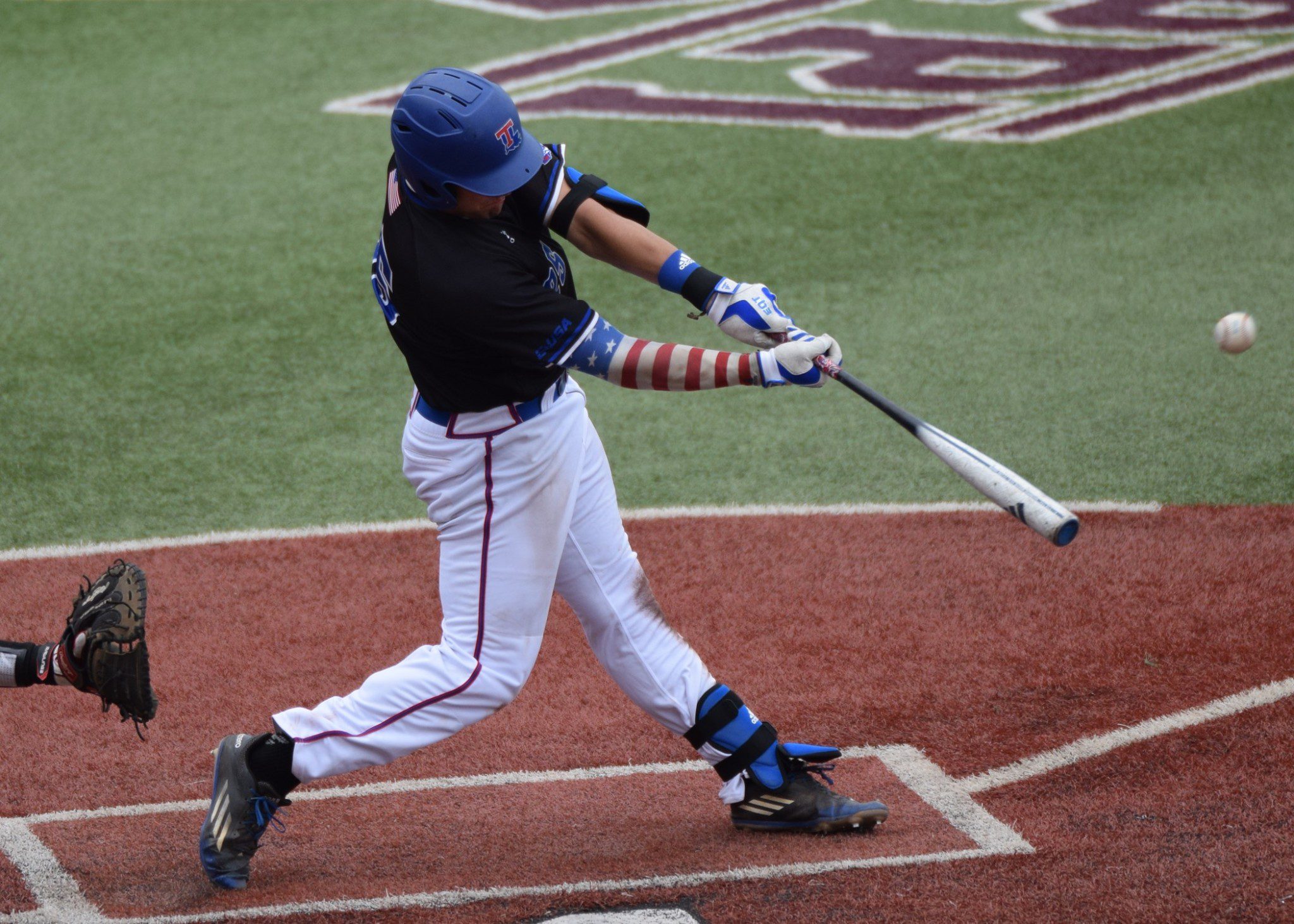 Louisiana Tech scored eight runs in the first inning to take control, and leadoff hitter Jordan Washam had an afternoon to remember, hitting a home run, tallying three hits and knocking in five runs. Cody Daigle also hit a homer, while Raphael Gladu had three hits and Marshall Boggs went 2-for-5 with a double and three RBIs.

On the mound, senior righthander Cameron Linck put together a quality performance, striking out five, walking three and allowing a run on five hits in 5.1 innings.

The Bulldogs are now 11-1 and will get some serious D1 Baseball Top 25 consideration.

5. Rice Appears To Be In Trouble

Wayne Graham’s stranglehold on Conference USA regular season titles came to an end last season. Could the Owls’ streak of making the NCAA postseason actually be in jeopardy this spring? We’re not prepared to say that just yet, but there’s no question their 4-8 overall record is troubling, granted the Owls have played a brutally tough schedule.

Rice evened its series against Pepperdine early Saturday with a 7-6 victory, but dropped the series finale by allowing five runs in the seventh inning (rain-shortened game) to lose 5-2. Rice righthander Matt Canterino put together a quality start in the losing cause, striking out 10, walking three and allowing two runs on four hits in 6.2 innings. Meanwhile, Pepperdine starter Wil Jensen struck out three and allowed two runs on five hits in seven innings.

For those thinking of throwing in the towel on the Owls this early, they started last season with a 3-5 record and still played in the Baton Rouge Regional title game.

Still, the Owls need to right the ship sooner rather than later.

Play Of The Day

LSU shortstop Kramer Robertson put his body on the line in an afternoon win over Baylor.