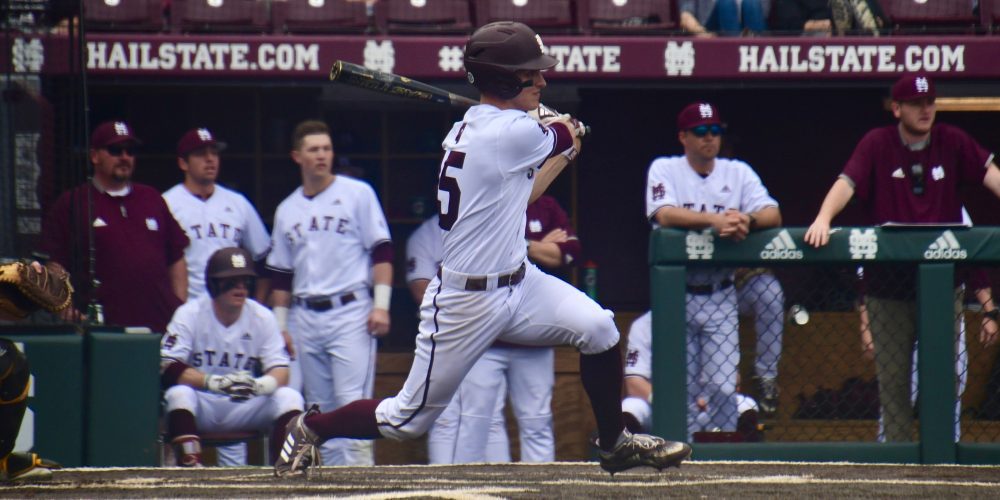 Man, this conference action stuff is a panic. Love it. It made for a really killer Saturday of college baseball and Kendall and Aaron allowed me to be in charge of the D1 Digest for today. Not a bad day to get this assignment too, especially since I wasn’t at a game today after staying up late for last night’s Oregon State-UCLA game.

So let’s get to the best and worst of the day in our beloved sport. As I like to do I’m going old school with the D1 Digest, giving the three-up, three-down for the day along with some extra mentions here and there. Here is how Saturday stacked up on the dirt and grass and canvas… oh wait, what material are bases made from?

The best of the day in college baseball

1- The unbeatens stay that way
Holy cow. Continued props to Arizona State and North Carolina State. They escaped some hairy situations today to stay perfect on the year.

ASU came from a 5-4 deficit at the singing of “Take Me Out To The Ballgame” to eventually down ornery Washington State by an 8-7 count. Hunter Bishop (again!) and Gage Workman led the offense with two RBIs each to help the Devils with their due. But the real hero was nine-hole hitter Sam Ferri, who cranked a bottom-of-the ninth solo tater to give the Devils an improbable win. Ferri ended the night going 2-for-4 with two RBI. Arizona State is now out to an 18-0 start.

Devils are 18-0 and life is good in Phoenix! ? pic.twitter.com/Tx9yKXqngh

Meanwhile across the country, NC State came from behind to stay perfect with a 9-8 win over Florida State. The Pack was down 8-5 with only six outs to play with when they pushed across three runs in the bottom of the eighth and then in the ninth inning, two straight walks to start the inning would be the bad omen for the Seminoles. Devonte Brown would come in to pinch hit and immediately get the first walk. Another walk and a wild pitch would put Brown 90 feet from the winning run. Tyler McDonough then came on to provide the game-winning run. Boom, 19-and-0.

The ☝️ of many walkoff hits for the freshman @tm_mcdonough

2- Texas Tech takes the crowd out of the game
In front of the largest regular season crowd in Disch-Falk field history, the Red Raiders made sure that they would end up spending the whole game sitting on their hands as Caleb Kilian and Clayton Beeter combined on a one-hitter to pull Tech to a 3-0 win. A full 7,879 fans couldn’t help the UT offense as five walks was about their only bright spot. Killian improved to 1-2 and Beeter picked up his third save. Tech scored all three runs in the eighth inning when Blair Henley walked the first two batters of the inning. Cody Masters knocked in a pair of runs with a one-out single.

3- The Bulldogs bulldog the Gators
What an impressive series win for Mississippi State. After going on the road and beating Texas Tech and Sam Houston two weeks ago, this time they went to Gainesville and took down the Gators in two of three games. After winning on Friday, the Dogs also took game two, the first of a doubleheader on Saturday, by a 10-5 count. With that win the Maroon & White matched the 1985 team’s 14-game win streak, which was the fourth-best streak of all-time for the program. Jake Mangum did his part – of course – slamming a game-starting home run and joined Dustin Skelton in gathering three hits. On the mound, JT Ginn was freakin’ amazing again, pitching into the seventh inning, striking out 11 and not issuing a single walk to pick up his fifth win in his fifth start. Florida would come back to avoid the sweep with a 4-2 win in the nightcap.

UCLA won the series opener between the two teams on Friday, but the Beavers responded Saturday night with a 7-3 victory. The Bruins and Beavs were tied 3-3 entering the ninth before OSU put up a four-spot, led by an Alex McGarry RBI single and a two-run single from Adley Rutschman, followed by an error on the same play. McGarry, by the way, hit a home run earlier in the game to help the OSU offensive cause. OSU lefthander Brandon Eisert was terrific out of the bullpen, striking out a career-high 10 batters in 4.2 shutout innings. The win by OSU sets the stage for an outstanding series finale on Sunday.

– Indiana State continues to roll.
Check out what Larry Bird U. is doing. Today the Sycamores swept a doubleheader from The Citadel, 5-1 and 4-2, to improve to 15-1, which gives them the best start in program history. You can thank the two starting pitchers as senior left-hander Triston Polley tossed a complete-game three-hitter which included 10 strikeouts in game one and then right-hander Collin Liberatore went seven innings, allowing a run on four hits with six strikeouts in game two.

Here is Mitch Hannahs’ reaction to his Sycamores staying hot…

We have complete reaction from the DH sweep of the Citadel today from Coach Hannahs, @tristonpolley28 and @CollinLib21 #MarchOn pic.twitter.com/rJ2q3yA7Ww

– Jonathan Ducoff, Texas A&M
As the only senior in the Aggie batting order today, leave it to the fourth-year guy to help seal the deal in the 8-7 win over No. 1 Vanderbilt in the bottom of the ninth inning. Ducoff came into the game as a pinch hitter in the eighth inning and started the rally with a two-run single as part of the five-run frame. Then, in the ninth, his single to left scored Ty Condel with the game-winning jog-off hit. The Aggies evened the series with the win.

– VMI’s Ryan Hatten
You can’t blame this guy for today’s loss, he did his part. The junior first baseman went 5-for-5 with two home runs and two doubles in a 15-13 loss in 10 innings to Lehigh. Hatten also singled in his first at-bat to fall just a double shy of the cycle. Because of his insane outing, Hatten also improved his batting average 130 points and his slugging percentage jumped from .125 to .459. Hatten accounted for six RBI and scored five times himself.

– Houston’s late-game heroics
For the second straight day the Cougars took down Dallas Baptist on the road, this time by a 2-0 count. After scoring five runs in the last two innings to beat DBU on Friday 8-6, the Cougs scored single runs in both the eighth and ninth innings today to clinch the weekend series. With the win, UofH has now won six in a row after struggling to a 4-7 start. A bunt single from Grayson Padgett allowed Craig Yoho to score from third with the game-winning run in the eighth inning.

– Illinois shows a flair for the dramatic.
The Fighting Illini won a pair of 5-4 games over Southern Illinois, both in their last at-bats, to improve to 12-3. That matches their 2009 team for the best 15-game start in the last 30 seasons. Jacob Campbell sent an RBI sac fly in the bottom of the ninth to win the first game. In the nightcap, the Illini allowed the Salukis to score four unearned runs in the seventh inning to fall behind 4-3, but then scored two runs in the bottom of the eighth to pull out the DH sweep.

A chance for sweep No. 4 on Sunday ? pic.twitter.com/GKkL0paxRM

– Another Arkansas frosh shines again.
When I saw the Razorbacks play at USC a few weeks ago I was impressed with some of the young piggies that shone well in SoCal. One of those was Christian Franklin, who batted in the nine-hole, played left field and made a few major contributions to help the Hogs beat Missouri 4-3 today in Fayetteville. He went 1-for-2 at the plate, but that included an RBI fly ball in the second inning and a two-run single in the fourth inning. In addition to that, Franklin went into the crowd down the left field line to snag a fly ball to secure the final out of the game. The Razorbacks go for the sweep on Sunday.

The worst of the day in college baseball

Winston Salem State announced today that it was going to give its baseball program the axe in order to start up a golf program. Sigh. And in the biggest “No duh!” moment, the write-up from BlackCollegeNines.com says “The athletic department based its decision on potential cost savings, facilities and travel requirements. But there were talks of gender equity issues that weren’t mentioned.”

2- Utah Valley’s 10th inning.
It’s not a record for the most runs in an extra inning game, but it’s gotta be close. UC Irvine scored a program record 13 runs in the 10th inning to “edge” the Wolverines 17-4. The Anteaters sent 18 batters to the plate and had the first eight batters to reach base. UVU also walked six and plunked two in that fateful frame. The ‘Eaters also got a grand slam from Mikey Filia and a three-run home run from Brendan Brooks. To make matters worse, UCI was able to tie the game in the ninth on a Brooks sac fly to force extra innings.

3- Cal State Fullerton… Gah!
It’s hard to believe this one is *only* number three on this list but Cal State Fullerton dropped its second straight game to James Madison… at home… and without scoring a single run. Holy Garrido, what is going on down there in Orange County? After playing such a rigorous non-conference schedule you’d figure this would be a weekend where the Titans could pick up a few wins against a mid-major program coming from three time zones away. Instead, after tonight’s 2-0 loss the Titans find themselves scoreless in 18 innings against the Dukes so far this weekend. The Titans have managed 11 hits and zero runs in an 0-and-2 weekend vs. JMU so far.

Dishonorable Mentions
– The Vanderbilt bullpen
After Patrick Raby left the game against Texas A&M after five innings, three Commodore relievers came on and ended up giving up all eight runs on six hits and issued six walks. As mentioned above, the Commodores had a 7-2 lead with six outs to go and gave up five runs in the eighth and the game-winning run in the bottom of the ninth.

– Old Dominion pitching.
The Monarchs came into this weekend with a 12-3 record and with the 13th-best team ERA in the country at 2.69. You can throw all that out the window now as Charlotte plated 21 runs on 23 hits on the ODU arms staff in a 13-8 and 8-7 wins on Saturday. What compounded the Monarch problems was issuing nine walks and nine hit batsmen in the two games. Prior to today’s games, ODU pitchers had plunked just 12 batters in their previous 15 games. Yikes.

– Creighton’s sticks.
For the second day in a row the Bluejays offense was stymied by Evansville arms, dropping today’s contest 4-0. In the two games so far this weekend the Jays have 10 hits but only one run. They lost Friday’s opener to the Aces 7-1. Granted, this could be the by-product of a 12-day lapse where they played no games due to weather, but still we’re talking about a team with high-round draft picks Isaac Collins and Will Robertson on it.