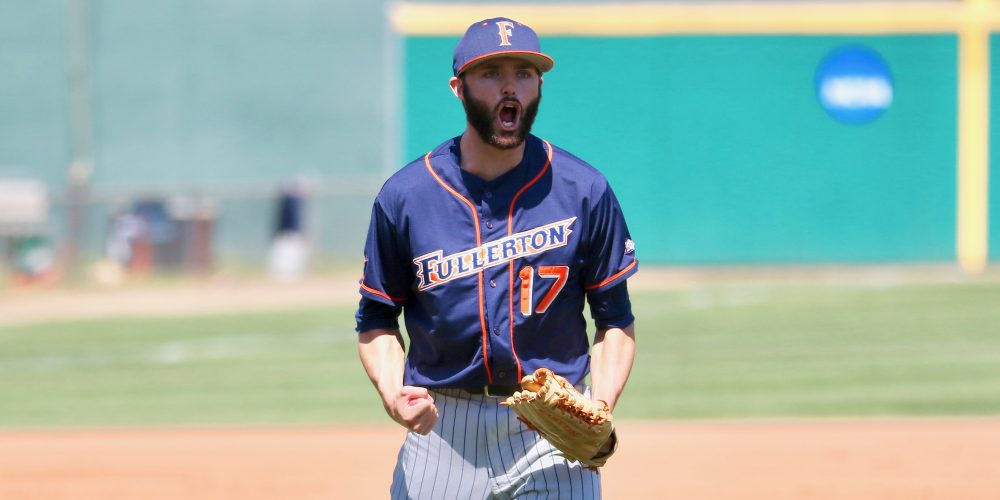 Team of the day: Arkansas

A top-five showdown between the Hogs and Rebels began Thursday night, and it was Dave Van Horn’s club that was victorious, 6-4. The Hogs jumped on Ole Miss lefthander Ryan Rolison for four runs the first two innings, but Rolison eventually settled in and the Rebels scored a run in the second and three more in the third to tie the game at 4-4. Arkansas took a two-run lead in the sixth and never looked back, thanks to lefty Matt Cronin. Cronin struck out five, walked one and allowed just one hit in three shutout innings. Carson Shaddy led the Hogs’ offense with a home run, three hits and two RBIs, while the two aces had some good, and not so good moments. Blaine Knight struck out seven, walked one and allowed four runs (two earned) on seven hits in six innings, while Rolison struck out eight, walked one and allowed five runs on nine hits in 5.1 innings. Arkansas needed the series opener with Isaiah Campbell not pitching this weekend because of an inflammation in his elbow.

It has been the season of the no-hitter in college baseball so far, and Thursday afternoon, we saw the 17th no-hitter of the season take place as Eastman did the deed against UC Santa Barbara. The 17th no-hitter breaks the previous record in the a aluminum bat era — 16 in 2013. As for Eastman’s performance against the Gauchos, he struck out seven and walked one in the complete game performance, throwing 113 pitches, 74 for strikes. It was the fifth no-hitter recorded in Cal State Fullerton history and the first against a UCSB team since the 1967 campaign. It was a day to remember for Eastman and the Titans. He made history.

Solid day at the yard. Can’t wait to go back to the hotel, relax, maybe watch a little @SportsCenter with @stanverrett, Neil and special guest @EastmanColton #SCTop10 pic.twitter.com/j6ciFFRmhG

Life on the road can be difficult sometimes — even for the nation’s top-ranked team. OSU got a rollercoaster start from freshman righthander Kevin Abel in an 8-7 loss to the Utes. The Utes received a big performance at the plate from Shea Kramer, who smacked two doubles in and knocked in a run, while Matt Richardson and Chris Rowan each knocked in two runs. As for the Beavs, Trevor Larnach smacked another home run in the loss. OSU has now lost back-to-back games after losing the series finale to Washington last weekend.

The Wolf Pack have played at a high level over the past couple of weeks, but their luck ran out a little bit Friday afternoon in an ugly 10-2 loss to Virginia Tech. The Hokies roughed up the Pack for eight runs in the third inning on the way to victory. Luke Horanski smacked a double, tallied two hits and knocked in two runs for lead the way for VT, while three others had two hits and Joe Freiday recorded three hits. As for the Pack, Michael Bienlien had a tough start, allowing five runs on eight hits in 2.1 innings.

Upset of the day (3): West Virginia over No. 9 Texas Tech

It has been a tough season thus far for the Mountaineers. They entered the year in the top 25, but have scuffled the first half of the season. But could they finally be showing signs of life? WVU got some outstanding pitching on the way to a 1-0 road win over the Red Raiders. Righty Isaiah Kearns allowed just two hits in three shutout innings, while Jackson Wolf and Shane Ennis tossed a combined six shutout innings out of the bullpen, with Wolf allowing just two hits in four frames.

What in the world is going on out on the West Coast tonight? It’s an upset epidemic. Oregon righthander Kenyon Yovan recently moved to the weekend rotation, and he was outstanding in a 10-1 win over Stanford. He struck out nine, walked one and allowed three hits in six hitless innings. Meanwhile, the offense touched up Stanford righthander Tristan Beck for six runs (five earned) on seven hits in four innings. Offensively, Jonny Deluca, Jakob Goldfarb and Gabe Matthews each hit a home run, with Deluca knocking in four runs.

• No. 20 Louisville has lost two of its three ACC series, and had hoped to get off to a fast start on the road against No. 7 Florida State. That didn’t happen, though, as the ‘Noles captured a dominant 9-4 victory. FSU righty Cole Sands gave his team a solid start, striking out eight, walking two and allowing three runs on four hits in seven innings, while Mike Salvatore and Jackson Lueck each had two hits and two RBIs to lead the offense. As for UL, it was a night to forget for lefty Adam Wolf, who allowed eight runs in just 2.1 innings.

• No. 12 Clemson took care of business at home in a 10-2 win over Boston College. Seth Beer hit his eighth home run of the season and knocked in four runs, while Robert Jolly knocked in three runs for the Tigers. Clemson’s Jacob Hennessy put together a quality start on the bump, striking out four and allowing just a run and a hit in six innings.

• Georgia appears to be the real deal. Until tonight, the Bulldogs hadn’t truly played a weekend game against a team perceived to be a top 25 club. Well, Georgia played a team like that in Texas A&M, and was outstanding from an offensive standpoint in an 11-5 win over the Aggies. Michael Curry hit a three-run homer in the fifth inning to give the Bulldogs a 7-4 lead, while Tucker Maxwell also hit a home run. As for the Aggies, the bullpen continues to be a nightmare with lefty Kaylor Chafin allowing three runs in 2/3 inning.

• No. 24 Coastal Carolina hit the road and captured a 7-3 win over Georgia Southern. It was a career night for veteran righthander Jason Bilous, who struck out a career-high 10, walked three and allowed just three runs on three hits in six innings.

• No. 21 LSU used a balanced approach from Zack Hess and the offense to take down Mississippi State in dominant fashion, 10-1. Hess struck out 10, walked four and allowed a run on three hits in 6.1 innings, while at the plate, Zach Watson smashed a home run and knocked in two runs, while Antoine Duplantis tallied yet another three-hit performance. Austin Bain, Daniel Cabrera and Jake Slaughter each knocked in two runs. Watson’s home run, by the way, went an estimated 426 feet. Yeah, it was touched.

• Aaron Fitt has much more on Wichita State’s impressive 14-3 win over East Carolina, but let’s single out hard-hitting Alec Bohm. How about this night? He smacked a pair of home runs, hit a double and knocked in six runs. Gunnar Troutwine also hit a home run for the Shockers and knocked in four runs, while Trey Vickers and Luke Ritter each tallied three hits.

• It’s hard to get a good feel for the West Coast Conference, but perhaps San Francisco should be the favorite moving forward. The Dons are red-hot and improved to 17-8 overall with an 8-4 win over San Diego. Dons starting pitcher Thomas Ponticelli struck out nine, walked one and allowed two runs on seven hits in eight innings, while the offense was led by Michael Perri, who smacked a double and knocked in three runs and Jonathan Allen, who went 4-for-4.

• Arizona State dropped a tough 8-7 decision in 10 innings on a walk-off home run by Washington State, but the story on this night was hard-hitting freshman Spencer Torkelson, who already broke Barry Bonds’ freshman home run record with his 12th homer in the setback to the Cougars. The fact Torkelson accomplished that feat in just 25 games is amazing. Here’s a tip of the cap to Torkelson.

@spennyt19 takes @BarryBonds' ASU freshman home run record with his 12th home run of the season. We're only in game 25!

• Nevada’s Dillan Shrum hit a walk-off RBI single in the bottom of the ninth inning to guide the Wolf Pack to a 5-4 win over UNLV. Shrum finished the night with a pair of hits, while three others chipped in multi-hit performances for T.J. Bruce’s club.

• South Carolina finally cooled off Tennessee Friday night in a 6-1 home win. The Gamecocks jumped out to a three-run lead in the first inning, while righthander Adam Hill put together a solid start, striking out four in five no-hit frames. Hunter Cullen knocked in three runs for the ‘Cocks, while Jonah Bride had three hits.

• Long Island sophomore lefthander Patrick Clyne had an afternoon to remember in a 5-0 road win over Fairleigh Dickinson. Clyne struck out 14, walked just three and allowed six hits in eight shutout innings in the win.

• St. John’s has struggled a little over the past couple of weeks, but returned to its usual self in an 11-5 road win over Minnesota. The Johnnies smacked three homers in the game and scored 10 of their 11 runs the first three innings. Jamie Galazin hit a home run, tallied two hits and knocked in four runs, while Wyatt Mascarella and Josh Shaw each tallied three hits.

• Tulane’s Kaleb Roper struck out 10, walked two and allowed two runs (one earned) on six hits in eight innings as the Green Wave surprised South Florida on the road, 3-2. While Roper put together a big-time performance, lefty Shane McClanahan also was impressive, striking out 12 and allowing just one earned run on five hits in six innings.