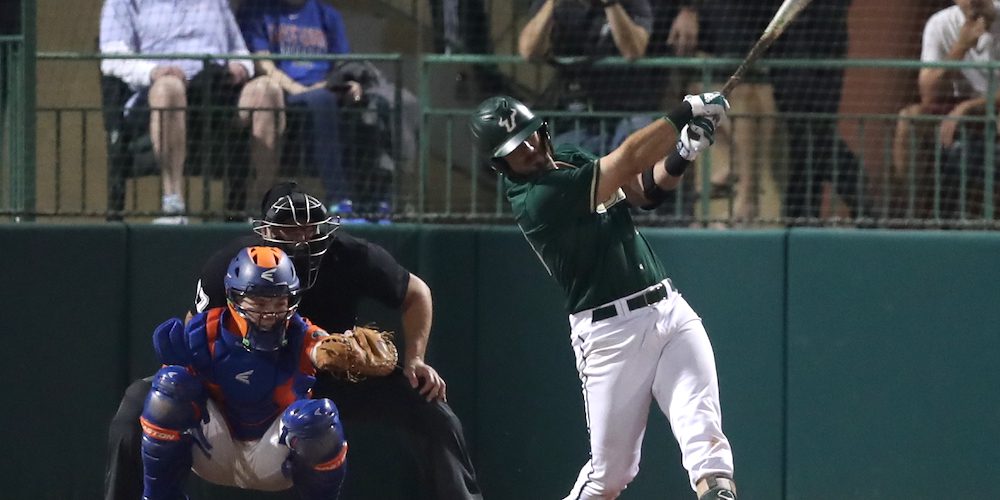 The American has had quite the first week of the season. Connecticut took two of three from Louisville this past weekend, while the Bulls added to the American’s already robust win total with a dominant 6-1 home win over Florida.

The Bulls got off to a fast start against the Gators with a pair of runs in the first, but the tone for the rest of the night was set in the third when USF veteran slugger Joe Genord hit a mammoth shot to put the Bulls in total control, 3-0. He finished the night with two hits, while Kyle Phillips had three hits and two RBIs and Garrett Zech added a pair of hits. Furthermore, Baron Stuart gave USF a strong start, striking out six and walking three in four hitless innings, while Logan Lyle tossed two shutout frames out of the pen.

It was a night to remember in Tampa.

Coach Mohl on tonight’s big win over the Gators. ? pic.twitter.com/Hpa4OTFrDH

Liberty over No. 20 Wake Forest

It was a highlight filled afternoon for the Flames as they took care of business against Wake Forest, 9-3, at home. Liberty right fielder Ayden Karraker made headlines in more ways than one. In addition to going 2-for-2 at the plate with a double and three RBIs, he also made a ridiculously impressive catch in foul territory, which you’ll see below.

Jaylen Guy also had a productive day for the Flame with two hits, while LU starting pitcher Mason Meyer put together a solid performance against a quality lineup. He struck out four, walked one and allowed three runs (two earned) on five hits in 7.1 innings. Liberty’s win is on the heels of Scott Jackson’s club giving South Carolina all it could handle over the weekend.

WOW!! Ayden Karraker goes OVER the wall in right to make an incredible catch! #SCtop10 pic.twitter.com/jlURou8DU2

The Toreros are off to a 4-0 start this season and picked up a solid 4-0 road win over Long Beach State. Toreros freshman righthander Jake Miller tossed a gem in the win over the Dirtbags, striking out four, not allowing a walk and allowing just three hits in seven shutout innings. Miller is off to a solid start this season. He had a relief performance over the weekend and struck out two in two shutout innings.

• Coastal Carolina’s Cameron Pearcey went 3-for-4 with a home run and an RBI, while Kieton Rivers and Scott McKeon each had two hits and two RBIs to help guide the Chanticleers to a solid 10-5 road win over UNC Wilmington. Six Coastal pitchers led the way on the bump with Alaska Abney earning his second save of the season by striking out four and allowing just one hit in three shutout innings.

• Texas hit the road on Tuesday and made easy work of Rice, 11-4. Six Longhorns hitters recorded two hits in the game, with Zach Zubia hitting a big-time blast and finished the night with three RBIs. DJ Petrinsky also knocked in three runs, while Austin Todd knocked in two. It’s also worth noting that Donny Diaz, who’s back from an injury, tossed two shutout innings out of the pen in the win.

• LSU scored a run in each of the final two frames to get by local program Southeastern Louisiana, 6-5. Josh Smith had two hits and continues to hit at a torrid pace so far this season, while Matthew Beck threw well out of the bullpen with two shutout frames. Prized LSU freshman pitcher Cole Henry struggled on the bump, allowing four runs on seven hits in 2.2 innings. As for the Lions, they’re now a surprising 0-4 on the season.

• UCF is trending the right direction early this season and picked up a nice midweek win over struggling Stetson, 10-2. Ray Alejo led the charge for the Knights, going 2-for-3 with a home run and four RBIs, while Pedro Castellano knocked in two runs and Chandler Robertson had two hits. Stetson dropped to 0-4 on the season.

• NC State is one of several programs in the triangle off to a terrific start this season. The Pack moved to 4-0 with a dominant 5-0 win over Elon. Wolfpack starting pitcher Michael Bienlien allowed just one hit in 2.1 innings despite having some command issues, while the bullpen was terrific with Baker Nelson, Mathieu Gauthier and Evan Justice leading the way. Justice’s performance is particularly intriguing because he has a big-time arm but has lacked consistency in the past. Justice struck out three and allowed just three hits in 2.1 innings.

• Lipscomb freshman righthander Tyler Guilfoil put together an impressive start in a 3-1 home win over Western Kentucky. Guilfoil struck out nine, walked just one and allowed just one hit in five innings of work. Alex Dorso also was terrific with two shutout innings out of the pen.

• UC Santa Barbara’s Andrew Martinez had a night to remember in a dominant 13-2 road win over UNLV. Martinez went 3-for-4 with a home run and two RBIs, while Armani Smith also hit a home run and Eric Yang chipped in a two-hit performance. UCSB got a solid start from Jack Dashwood, who struck out seven, walked two and allowed two runs and two hits in five innings.

• Tennessee is quietly off to an incredible start this season. Sure, the Vols haven’t played top notch competition, but the pitching staff has yet to allow a run through four games and Tony Vitello’s club is outscoring teams 29-0. That trend continued Tuesday night in an 18-0 win over Northern Kentucky. UT starter Sean Hunley struck out six, walked one and allowed three hits in five shutout innings, while offensively, Luc Lipcius had a game to remember with a double, triple, three hits and five RBIs.

• Nicholls third baseman Brady Bell put together a big-time performance in a 25-5 win over Alcorn, going 4-for-5 with a double, home run and five RBIs.