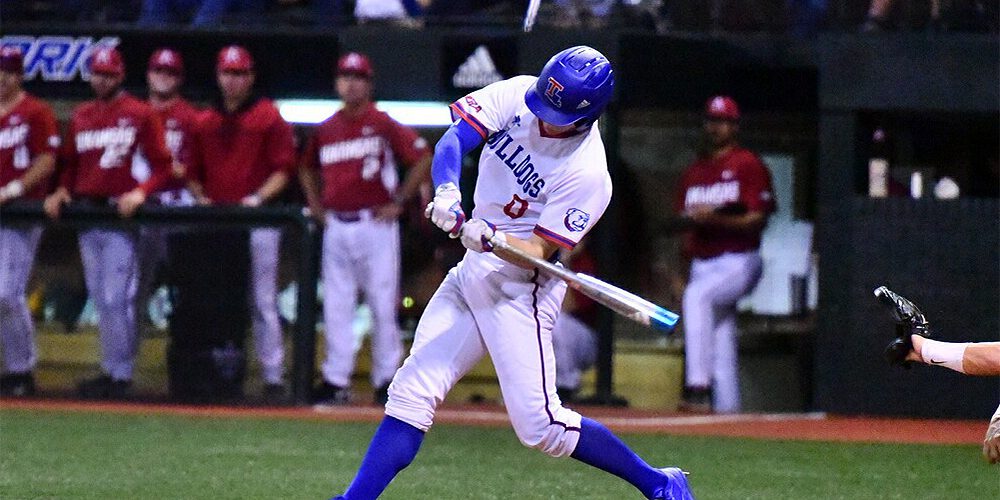 Team of the day: Louisiana Tech

The Bulldogs made a huge statement last season by getting to the NCAA postseason. Well, it looks like they’re well on their way to accomplishing the same goal this spring, at least if their start holds up. Tech defeated Arkansas 4-3 to improved its record to 8-0.

Arkansas jumped out to a 1-0 after two innings, while the Bulldogs took control of the contest with a four-run sixth inning that included a pair of two-RBI doubles form Chace Lunceford and Jordan Washam. The Hogs rallied in the ninth with a pair of runs to make it 4-3, but Tech held on for the victory.

What a start it has been yet again for the Bulldogs.

Upset of the day: Memphis over No. 11 Ole Miss

Mike Bianco’s Rebels are off to a phenomenal start, but suffered their first loss of the season in a setback to Memphis, 9-6. The Rebels didn’t play their typical brand of baseball, committing four errors with five of the Tigers’ nine runs being unearned.

For the Tigers, two-hole hitter Colton Neel had a big day at the plate with a home run and two RBIs, while Alec Trela and Andy Bowman each had two hits.

Memphis is off to a solid 5-2 start, while the Rebels now get ready for this weekend’s Shriner College Classic.

Player of the day: Dre Gleason, 1b, Austin Peay

The Governors took care of business in impressive fashion Tuesday night with a 21-8 home win over in-state foe Middle Tennessee State. Gleason led the charge, going 4-for-5 with a home run, double and a whopping seven RBIs. For the season, he’s hitting .464 with four homers and 16 RBIs.

• North Carolina is off to an outstanding start on the mound this season and righthander Tyler Baum put together another quality start, striking out six, walking just one and allowing two hits in 5.2 shutout innings in an 11-0 win over Winthrop. UNC is 8-0 entering Wednesday’s showdown with St. John’s, which our Aaron Fitt will be attending.

•  Clemson had a nice night at the plate, but it was righthander Tyler Jackson that ultimately led the charge in a 9-2 win over Wofford. Jackson struck out nine, walked just one and allowed a run on three hits in seven innings. The Tigers have an always-important series against rival South Carolina this weekend.

• Vanderbilt hosted Southeastern Louisiana in one of the marquee midweek games and All-American outfielder Jeren Kendall led the charge for the Commodores in a 9-6 victory. Kendall smacked a pair of homers and knocked in four runs in the victory. Meanwhile, freshman JJ Bleday had a nice night at the plate with a pair of hits.

• TCU has an important weekend ahead in Houston, but hosted Rice for a marquee midweek bout. Well, the Frogs didn’t have much of an issue with Wayne Graham’s club, scoring 10 runs the first two innings to take total control. Evan Skoug and Austen Wade each hit a home run in the game, while Luken Baker went 3-for-3 to help lead the way. Veteran righthander Mitchell Travel, the starting pitcher, left the game after 2/3 inning because of what’s believed to be some sort of strain, but details are sketchy.

• Florida found a way to cool off UCF on Tuesday night. The Knights had quietly gotten off to an unblemished 7-0 start before dropping a 4-3 decision to the Gators. UF starting pitcher Nate Brown tossed three shutout frames to begin the game, while Kevin O’Sullivan’s club used six pitchers to notch the win. Offensively, Blake Reese led the Gators with a double and two RBIs.

• Oral Roberts is one of several teams off to a terrific start, and it picked up another dominant win Tuesday in a 12-1 triumph over Kansas. ORU scored five runs in the first to take control, while first baseman Brent Williams led the offensive charge, going 3-for-5 with a pair of homers and five RBIs. Meanwhile, Noah Cummings hit a home run and smacked a double in the win.

• North Dakota State improved its record to 5-3 on Tuesday with a 3-1 road win over Minnesota. NDSU’s Blake Stockert had an impressive start, allowing just three hits in five shutout innings, while Chris Choles was impressive out of the bullpen.

• Fresh off a series split with a quality Washington club, St. Mary’s defeated UC Santa Barbara on the road, 4-1. Gaels starting pitcher Ty Madrigal had an afternoon to remember, striking out seven, walking two and allowing just two hits in seven shutout innings, while Joe Vranesh led the way on the mound with three hits.

• How about this result in the Volunteer State? Belmont fended off a wild Southern Illinois rally – eight runs the final three innings – to win 18-17. BU’s Brennan Washington had an impressive day at the plate, going 2-for-6 with a double, home run and four RBIs, while Matt Cogen and Rafael Bournigal each had three hits for the Bruins.

• While Louisiana Tech is sizzling hot, former head coach Greg Goff, in his first season with the Crimson Tide, is seeing his club scuffle. The Tide dropped to 3-5 on the young season with a narrow 2-1 home loss to Jacksonville State. Alabama used eight pitchers against the Gamecocks, while Jacksonville State’s Justin Hoyt was the key on the back-end of the bullpen with 2.1 shutout frames to end it.

From The Social Front

If you missed the game tonight…@gigglybot123 made an @espn #SCtop10 catch! pic.twitter.com/Y4GiolQWJl

GET UP AND GET IT!

Appalachian State SS Matt Vernon flashes a little leather to take away the base hit! pic.twitter.com/VECwRqyo9t