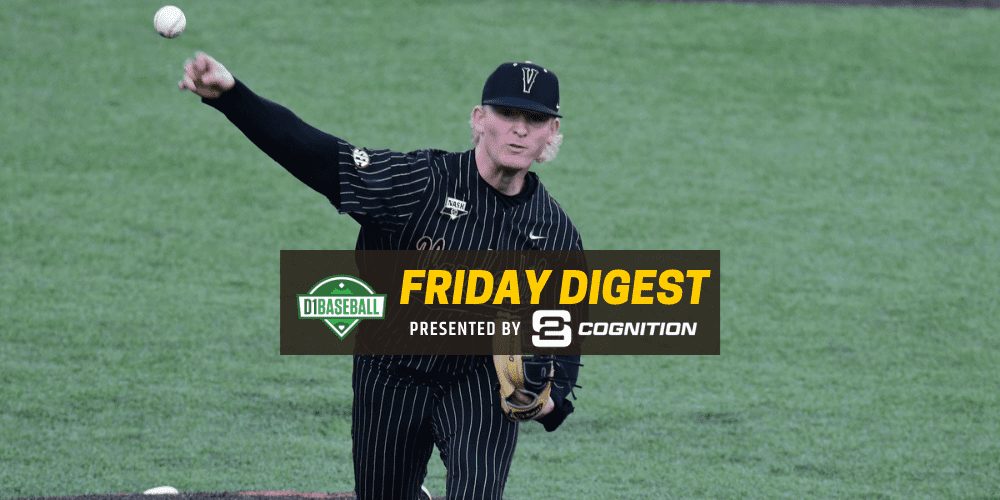 Chris McElvain and Christian Little combined to no-hit Kentucky as part of a 10-0 win for visiting Vanderbilt. McElvain struck out nine and allowed three walks over the first seven innings with Little striking out four, and walking one, over the final two frames. McElvain moved to 5-2 on the year and lowered his ERA by more than a half a run, down to 3.52. The Commodores’ big inning offensively came after UK ace Mason Hazelwood left the game, jumping all over reliever Ryan Hagenow, scoring four runs on a pair of hits, three walks and a pair of hit batters. Spencer Jones had the biggest day at the plate for the Vanderbilt hitters, going 2-for-5 with a triple and three RBIs.

In one of the bigger matchups of the weekend between Big 12 rivals and Top 25-ranked teams, No. 3 Oklahoma State enjoyed a loud 13-2 victory over No. 21 TCU. The Cowboys were playing baseball darts over the first several frames, scoring one, two, three and four runs in the first four innings before scoring “just” two runs in the fifth. Four of the team’s 17 hits were recorded by Nolan McLean, who went 4-for-5 with three runs scored and four driven in, three of which came on a third-inning, three-run bomb. Justin Campbell continued the total dominance on the mound, striking out 14 TCU batters and allowing just two runs on three hits over eight innings to move to 6-1 on the year.

Texas A&M hasn’t been messing around in recent weeks, winning each of its last two SEC series and getting off to a good start this weekend with a 2-1 win over No. 4 Arkansas. The story in this game was all about the pitching as Nathan Dettmer and Jacob Palisch combined to strike out 14 Razorbacks. Dettmer has continued his sensational season, moving to 4-2 on the year while working the first five innings of this game. Palisch also struck out seven, doing so in four innings of relief, to pick up his second save of the year. Arkansas ace Connor Noland was the hard-luck loser, striking out seven batters of his own over the first six innings, allowing just two hits and two unearned runs. Be sure to read Kendall Rogers’ recap from College Station.

Although Ole Miss took the first game of its series at home against its in-state rivals, Mississippi State turned the tables on Friday to even the series. This came after Ole Miss jumped out to an early 4-1 lead, scoring three runs in the first and a single run in the second. In fact, all four runs that scored in the first inning came on home runs; Luke Hancock hit a two-out home run in the top of the first for the Bulldogs before Justin Bench, Jacob Gonzalez and Tim Elko went back-to-back-to-back in the bottom half of the inning for the Rebels. A pair of two-run shots in the seventh inning by big-bodied sluggers Hunter Hines and Kellum Clark proved to be the difference as Mississippi State scored nine runs in the sixth, seventh and eighth innings to win the game, 10-7.

Things weren’t looking up for No. 20 Oregon entering the sixth inning. Washington State scored seven runs over the first five innings and had held the Ducks’ lineup in check. Oregon started to chip away in the sixth inning, scoring a single run and then adding another in the seventh. The Ducks truly went to work in the ninth inning, scoring five runs to tie the game and put the game into extra innings to set the stage for some serious walk-off dramatics. Brennan Milone provided the game-winning hit in the 10th, and he also hit a two-run single in the ninth that started Oregon’s five-run rally. In total, Milone went 3-for-6 with four RBIs. He was one of four Ducks that enjoyed three or more hits on the day. Four different pitchers combined to toss five shutout innings out of the bullpen to give the Oregon hitters enough time to work their magic.

6 – No ACC Upsets Among The Ranked, Yet

After the first day of the weekend, all five ranked ACC teams emerged victorious on Friday. No. 5 Miami had the most stressful of these wins, needing 10 innings to get past Pitt, 2-1, after carrying a 1-0 lead into the ninth inning. Brock Franks led off the top of the ninth with a solo shot that tied the game and forced extra innings before Canes first baseman CJ Kayfus won it in the 10th with a walk-off, run-scoring single.

No. 8 Virginia Tech continued its winning ways, squeezing out a 2-0 win over Boston College. The VT offense was held in check into the seventh inning, when Gavin Cross and Tanner Schobel hit back-to-back solo shots. Griffin Green (6.2 innings) and Graham Firoved (2.1) combined on the shutout.

No. 11 Virginia rode three solo home runs by Colin Tuft, Griff O’Ferrall and Alex Tappen to beat visiting North Carolina by a score of 4-2. Jay Woolfolk and Brandon Neeck each worked 1 2/3 scoreless, hitless frames in relief to secure the win.

You can’t stop the Louisville bats, you can only hope to contain them, and NC State thought that’s what it was doing until a nine-run seventh inning as the 16th-ranked Cardinals came out on top, 11-4. Ben Bianco, batting ninth in the lineup, opened the scoring with a grand slam as part of a 3-for-4 day at the plate. Tommy White hit a pair of home runs, his 15th and 16th on the year, in the loss.

After getting swept at Duke a week ago, No. 18 Notre Dame got back to its winning ways at home with an 8-3 win over Wake Forest. The offense was its usual, efficient self, executing well once batters reached, and ace lefthander John Michael Bertrand moved to 6-0 on the year with six solid innings leading up to an hour-long rain delay.

There were plenty of fireworks in the two ACC games that didn’t include ranked teams as Georgia Tech walked off Duke in the 10th inning, 12-11, and Clemson stormed back against Florida State, 6-4. Drew Compton hit the game-winning single for Tech as part of a three-hit, five-RBI day, while Max Wagner’s grand slam in the eighth inning – his second homer of the game – proved to be the game winner for the Tigers.

7 – Just Another Win For The Vols

It’s getting to the point of the season where an 8-2 win over a solid Florida team, in Gainesville, just doesn’t seem as exciting, and yet that’s where we’re at with 35-3 Tennessee. After the Gators kept the Vols off the scoreboard in the first inning they exploded in the second, scoring seven runs. Three RBI singles led up to Trey Lipscomb’s three-run home run, his 16th of the year. That was more than enough run support for freshman ace Chase Burns – who moved to 7-1 on the year – Ben Joyce and Redmond Walsh. Josh Elander is now 4-0 as acting head coach during Tony Vitello’s suspension.

Recent series wins over Texas State and Georgia State helped propel Georgia Southern into the most recent Top 25. On Friday the Eagles proved they belonged among the ranked with a gritty performance against South Alabama, scoring three runs in the top of the ninth to squeeze by with the 5-4 win. Down 4-3 heading into the ninth inning, shortstop Austin Thompson led off the inning with a solo home run to tie the game. Jason Swan used his third hit of the game to put Georgia Southern on top and Christian Avant hit what proved to be the game-deciding run with another RBI single.

There are three key series taking place in the Big Ten this weekend and some emphatic statements were made in each of the three Game Ones that were played. Iowa, playing at red-hot Rutgers – who opened the weekend leading the conference – received a dynamic performance from righthander Adam Mazur. Mazur allowed just one run on six hits, striking out 11 batters against a tough Rutgers lineup. Izaya Fullard’s two-run home run in the eighth gave the Hawkeyes some breathing room.

And don’t look past Illinois, who moved into a tie for first place in the Big Ten with a 19-1 dismantling of No. 24 Maryland. Five different Illini batters hit home runs and the team’s top five hitters – Danny Doligale, Branden Comia, Justin Janas, Jacob Campbell, Cam McDonald and Kellen Sarver – combined to go 15-for-24. Lefthander Cole Kirschsieper moved to 5-2 on the year by striking out eight over six strong innings.

There were some big, big individual performances all over the country on Friday in addition to the ones already detailed above. Here are some of the highlights:

• Tulane moved into a first-place tie at the top of the American Athletic Conference standings with a 11-5 victory over East Carolina. The biggest blow was the Green Wave’s six-run fourth inning and shortstop Trevor Minder capped off that big inning with a two-run bomb. He also had an RBI single in this game along with a pair of sacrifice flies, giving him five RBIs on the day.

• Stanford ace Alex Williams allowed just one run over eight innings in a 11-1 win over Grand Canyon while freshman sensation Braden Montgomery had a pair of solo home runs.

• Sonny DiChiara hit his 12th home run and Blake Burkhalter recorded save No. 9, the most in the SEC, in a 6-3 win for No. 16 Auburn over South Carolina.

• Also recording 13 strikeouts as part of a dominant shutout was Southern Miss ace Tanner Hall, who moved to 7-0 on the year as he and Lardon Harper – picking up his eighth save – combined on the three-hit shutout, and 1-0 win, over Rice.

• Texas shortstop Trey Faltine went 3-for-5 with five RBIs as No. 10 Texas clobbered Baylor, 20-1. Six other Longhorns batters had multi-hit games, and five had home runs as Texas pounded out 20 hits to give ace Pete Hansen some well-deserved room to work with.

• Cade Doughty’s walkoff single in the 10th gave No. 22 LSU a 4-3 win over visiting Mizzou. The Tigers’ three other runs came on three solo shots by Dylan Crew, Brayden Jobert and Tyler McManus.

• Oregon State also won on a 10th-inning walkoff hit as Garret Forrester played hero. Wade Meckler’s home run in the bottom of the eighth tied the game 3-3 and forced extra innings. Starter Cooper Hjerpe didn’t factor into the decision but struck out 12 over the first six innings and he now has fanned 100 batters this season, second to Florida State’s Parker Messick (102).

• Saving the best for last, the performance of the day goes to Grambling ace Shemar Page, who fanned 13 batters as part of a seven-inning perfect game and a 16-0 thumping of Alcorn. Page is also among the national leaders in strikeouts as he now has 98 in 64 innings with a 2.67 ERA.