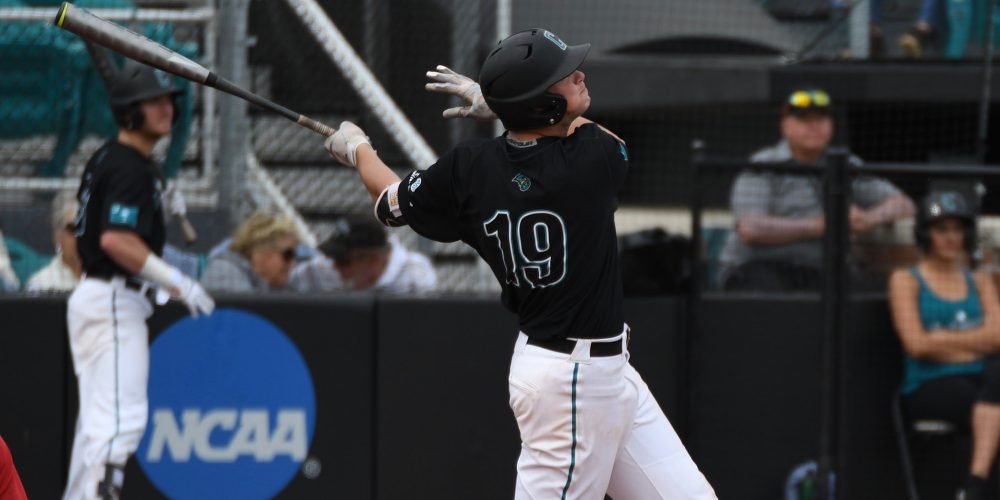 • Two days before the start of the Tony Gwynn Classic, Arkansas and Arizona hooked up for a midweek game at San Diego State, and the Razorbacks won a classic pitcher’s duel 1-0. Kacey Murphy (6 IP, 1 H, 0 R, 1 BB, 6 K) turned in a brilliant start for Arkansas against a very good offense, and the Hogs held the Wildcats to just two hits overall. Randy Labaut (7 IP, 3 H, 1 ER, 0 BB, 7 K) was a tough-luck loser for Arizona, allowing the game’s only run on Heston Kjerstad’s solo homer in the fifth. Our Shotgun Spratling was on hand for this one and will have more on these teams in his Thursday notebook.

• It’s been a tumultuous week for Mississippi State, which was swept convincingly by Southern Miss over the weekend and then saw second-year head coach Andy Cannizaro resign amid controversy on Tuesday morning. So there was more attention than usual on MSU’s midweek game against Jackson State — people wanted to see how the Bulldogs would respond. Well, they responded with in resoundingly positive fashion, thumping JSU 12-1. The Bulldogs drew 11 walks and pounded out 12 hits, including home runs by Hunter Vansau and Tanner Poole, helping graduate transfer JP France (3 IP, 1 H, 0 R) pick up his first win in a Mississippi State uniform.

Afterward, interim head coach Gary Henderson drew a stark contrast between his team’s energy level and overall level of play with its performance over the weekend.

• For the second year in a row, St. John’s went on the road and won an early-season midweek game at North Carolina. The Red Storm broke a 2-2 tie on Mike Antico’s solo homer down the right-field line in the seventh, kicking off a three-run rally that propelled St. John’s to a 5-2 win. Four St. John’s relievers combined to work 4.1 scoreless innings in relief of Jeff Belge (4.2 IP, 6 H, 2 R, 1 ER), as St. John’s improved to 4-0 on the young season. North Carolina, meanwhile, dropped its second straight midweek game to open its home schedule with two straight losses for the first time since 1962. UNC is 2-3 heading into a big traveling rivalry series against East Carolina. I was on hand at Boshamer Stadium, and I’ll have more on the Johnnies on Thursday.

• While the Tar Heels are scuffling into Week Two, East Carolina is riding high heading into their much-anticipated showdown series against UNC. The Pirates improved to 4-0 Wednesday with a 7-2 victory at Campbell. Seth Caddell (3-for-5, 2 R), Dwanya Williams-Sutton (2-for-4, 2 R, RBI) and Dusty Baker (2-for-3, 2 R, 2 RBI) led the offense for ECU, and freshman Alec Burleson (3 IP, 2 H, 0 R) started and earned his first career victory.

• NC State scored four runs in the eighth to come from behind and win a see-saw battle with Charlotte, 9-6. The Wolfpack led 5-0 through six innings, as hard-throwing freshman righty Reid Johnston (3 IP, 2 H, 0 R) turned in a solid start, but the 49ers stormed ahead with a six-spot in the seventh. NC State answered an inning later with that four-run eighth, capped by Brad Debo’s two-run single. Both teams are off to strong starts — Charlotte is 3-1 and NC State is 4-1.

• Missouri improved to 3-1 on its road trip to the Sunshine State with an emphatic 9-0 win at Miami. Shortstop Chris Cornelius (3-for-4, 2 RBI) led a nine-hit attack for Mizzou in support of a dominant Brian Sharp (5 IP, 4 H, 0 R, 0 BB, 8 K), and bullpen dynamo TJ Sikkema followed with three innings of one-hit, shutout relief, striking out five. Missouri’s junket to Florida continues this weekend with a four-game set against Northeastern in Fort Myers, while Miami carries a 2-2 record into its annual showdown series against rival Florida, in Coral Gables. Our Walter Villa will have a profile on the young Hurricanes’ infield in Thursday’s Weekend Spotlight.

• No. 23 LSU bounced back from a series loss to Notre Dame by coming from behind to beat New Orleans 14-6. The Privateers led 5-4 through five innings, but LSU’s offense erupted for four runs in the sixth, four more in the seventh and two in the eighth en route to the blowout victory. Nine Tigers registered hits as part of a balanced 12-hit attack, and the Tigers pieced it together on the mound, using nine pitchers.

• Auburn improved to 5-0 with a quality midweek win against Troy, 6-5. Conor Davis went 2-for-3 with a pair of RBIs, and Brendan Venter had three hits for the Tigers, while lefty Andrew Mitchell got the start and struck out nine over 4.1 innings innings of work, allowing just an unearned run. Both teams had been 4-0 heading into the game.

• UC Santa Barbara rebounded from a season-opening sweep at the hands of San Diego State by earning a 7-2 win against Fresno State — which was coming off an impressive four-game sweep of Michigan State. Clay Fisher went 3-for-4 to pace UCSB’s 10-hit attack in support of Luke Andrews (7 IP, 4 H, 1 ER, 0 BB, 4 K), who sparkled in his first start.

• Georgia rode an 11-run sixth inning to a 14-4 clobbering of Kennesaw State. Michael Curry drove in three runs in that inning, opening the scoring with a bases-loaded walk and capping it with a two-run single. Keegan McGovern paced Georgia’s 14-hit barrage with a 3-for-4 performance. The Bulldogs are off to a strong 3-1 start.