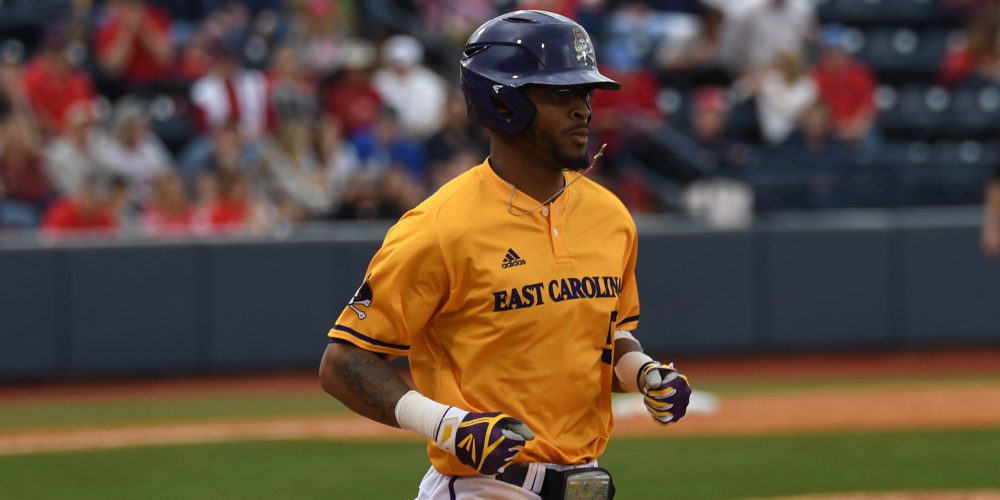 Reigning national champion Coastal Carolina (we are contractually bound to refer to the Chanticleers as “reigning national champion Coastal Carolina” until at least mid-March) did not begin its title defense in grand fashion, going 1-3 over the weekend in a home tournament. But Coastal got off the mat Wednesday with a 16-7 victory against in-state rival College of Charleston. The Chants got three-run homers from Wood Myers and Dalton Ewing, plus three RBIs from Kevin Woodall. Charleston helped bring about its own demise with five errors.

I’ll have more on Coastal in Thursday’s Weekend Preview, but suffice it to say Gary Gilmore remains very confident that his club is going to be very good once again, even if there are growing pains along the way.

• East Carolina also got off to a rough start in Week One, getting swept in three close games at Ole Miss. But the 18th-ranked Pirates bounced back with an outstanding performance Wednesday on the road against Big South favorite Campbell to claim their first win of the season, 10-0. T.J. Riles hit a two-run homer in the first to put ECU ahead for good; he finished with four RBIs, and Charlie Yorgen went 2-for-2 with three RBIs in the 9-hole. Chris Holba (6 IP, 2 H, 0 R, 1 BB, 4 K) and three relievers combined on a two-hit shutout for ECU, allowing just one walk.

• No. 22 Clemson also rebounded from a losing Week One by picking up a nice midweek win against a mid-major conference favorite, beating Western Carolina 11-5. Chase Pinder (4-for-4, 4 RBI) and Grayson Byrd (2-for-5, 3 RBI) led the Clemson offense, and Weston Jackson chipped in with a three-run homer in Clemson’s five-run seventh. The Tigers trailed 5-1 at the seventh inning stretch before storming back with five runs in the bottom of that frame and five more in the eighth.

• Upset of the Day: San Diego State won a road game at No. 12 Cal State Fullerton, 5-4. David Hensley had three hits, and Andrew Brown went 2-for-4 with two runs and an RBI, and he scored the winning run on a sacrifice fly in the seventh. SDSU got stellar relief from Hayden Petrovick (3 IP, 0 H, 0 R) and CJ Saylor (1 IP, 0 H, 0 R) to nail down the victory. The Aztecs take a 3-2 record into this weekend’s Tony Gwynn Classic.

• Alabama earned a quality midweek win against Southern Miss, 12-5 in Tuscaloosa. Chandler Avant went 3-for-4 with three runs and three RBIs out of the leadoff spot, while Cobie Vance and Hunter Alexander combined for five hits and five RBIs to lead Bama’s offense. The Tide scored five runs in the second, only to see USM come back to tie it in the fifth — but another five-spot in the seventh allowed Alabama to pull away. The Greg Goff era is off to a 3-1 start.

• No. 10 Louisville and No. 7 Vanderbilt both won their home openers Wednesday, as the Cardinals clobbered Eastern Kentucky 19-3 while the Commodores beat Evansville 7-4. Devin Hairston (4-for-4, 2 R, 3 RBI) and Logan Taylor (3-for-4, 2 R, 2 RBI) had big days to lead Louisville’s 19-hit barrage, and Rabon Martin threw three hitless innings to earn the win in relief. The Cardinals have played at a high level during their 4-0 start.

Vandy, meanwhile, got two hits apiece from Will Toffey Jason Delay and Ro Coleman in support of Maddux Conger, who earned the win with 4.1 innings of one-run ball. Coleman’s two-out, two-run triple into the left-center gap helped Vandy pull away in the eighth inning.

• Highly touted freshman righthander Zack Hess sparkled in his collegiate debut for LSU, allowing just two hits over five shutout innings while walking two and striking out six to lead the Tigers to an 8-1 win against Hofstra. Cole Freeman, Kramer Robertson, Greg Deichmann and Mike Papierski had two hits apiece to lead LSU’s balanced 12-hit attack. The Tigers improved to 4-1 after getting upset at New Orleans on Tuesday.

• No. 9 North Carolina got five combined hits from Brian Miller and Zack Gahagan in support of Cole Aker (6 IP, 3 H, 1 ER, 3 BB, 5 K) in an 11-1 win against Gardner-Webb. Aker is a big-time breakout candidate with very good stuff; he has a chance to move into the weekend rotation at some point this season, but the Heels got strong work this weekend from all three of its starters, so for now they have the luxury of keeping Aker in the midweek starter role, where he should thrive.

• Kendall Rogers favorite Shea Langliers went 4-for-5 and fell a triple short of the cycle for Baylor, which shut out Texas State 4-0 on the road. Four Baylor pitchers scattered nine hits and struck out 14 in the shutout. The Bears are playing good baseball early on — they’re now 5-0 with a sweep of overmatched Niagara and quality midweek wins against Nevada and Texas State. They’ll get a real test this weekend in a three-game set against South Alabama.

• The Scott Jackson era is off to a strong start at Liberty. The Flames lost their opener 10-2 against Virginia, but they bounced back with quality wins against Kansas and The Citadel to post a winning first weekend, and they followed it up with a quality 5-4 win against Kentucky on Wednesday. Will Shepherd and Eric Grabowski had two RBIs apiece for Liberty, which got three combined innings of one-hit, shutout relief from Garret Price and Jack DeGroat to nail down the victory. Kentucky blue-chip freshman Zack Thompson (4.2 IP, 4 H, 4 ER, 1 BB, 8 K) flashed electric stuff but ultimately took the loss in his first career start. The Wildcats are now 0-4, still looking for their first win of the Nick Mingione era.

• Maybe Austin Peay should consider a move from the Ohio Valley to the Missouri Valley. The Governors improved to 3-1 this season with a 10-3 win against likely MVC contender Southern Illinois — the third different MVC opponent Austin Peay has faced in four games. The Govs beat Illinois State 9-4 and lost to Indiana State 12-9; they have scored nine or more runs in each of their first four games. Chase Hamilton and Parker Phillips combined for five hits, four runs and six RBIs to lead the high-flying Austin Peay offense Wednesday.