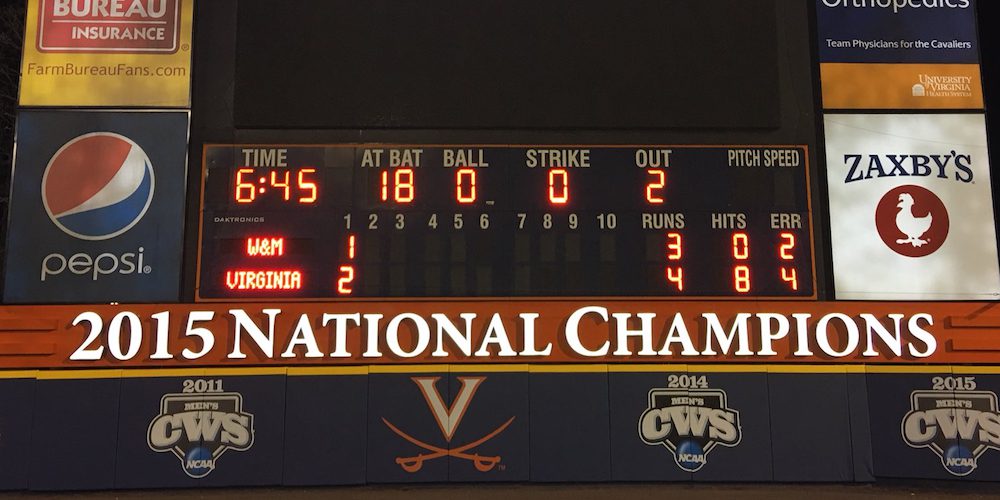 Team of the day: Virginia

We’re apparently going to get every variety of a no-hitter this season. The Cavaliers defeated William & Mary 4-3 in Charlottesville, and recorded a no-hitter in the process. Yes, that’s correct, the Tribe scored three runs without recording a hit. Virginia starting pitcher Bobby Nicholson walked four and allowed a run in 5.1 hitless innings, while the Cavaliers pitching staff walked seven batters in the contest. It’s not exactly how coach Brian O’Connor drew up the no-hitter, but he’ll take it … I think.

“You hear this all the time but if you stay around the game of baseball long enough you see something you haven’t seen before,” head coach Brian O’Connor said. “An 11-inning no-hitter, a collection of guys that pitched good but made some big pitches at clutch times. To have to come back and win it at the end and to have a no-hitter on the same night, is really really special.”

Here is how it all ended… One of the wildest games you will ever see pic.twitter.com/5e9p6qQluC

Upset of the day: McNeese State over No. 21 Mississippi State

McNeese came into the season expected to be one of the better teams in the Southland Conference. Sure, the Cowboys got off to an 0-6 start, but after no-hitting Texas State this past Sunday, the Pokes continued their successful ways with a 6-3 home win over Mississippi State, who has now lost two-straight contests. McNeese starting pitcher Tyler Wesley struck out five, didn’t walk anyone and allowed two runs on six hits in five innings, while offensively, Jake Cochran and Carson Maxwell each smacked home runs.

• No. 1 Florida actually got just an OK start for once, as righty Tommy Mace allowed two runs in 3.2 innings in an 8-3 win over North Florida. But how about lefty Andrew Baker? The sophomore struck out five and didn’t walk anyone in 2.1 shutout frames. JJ Schwarz, Jonathan India and Brady Smith each hit a home run in the game.

• No. 5 Arkansas got a pair of homers from Casey Martin to dominate Dayton at home, 18-1. The Razorbacks outhit the Flyers with Heston Kjerstad and Evan Lee each adding three hits and Dominic Fletcher going 2-for-4 with a double and two RBIs.

• Southeastern Louisiana avoided a potential ninth-inning setback against No. 22 LSU, as the Lions were able to escape a bases-loaded jam in a 5-4 victory. Drew Avans hit a home run and knocked in four runs, while two others finished the night with a pair of hits. As for the Tigers, righthander Todd Peterson struggled on the mound, allowing there runs in just two innings.

• Florida Atlantic improved its record to 7-1 with a 5-4 midweek win over in-state foe Miami. FAU’s Tyler Frank and Pedro Pages each had two hits in the game, while five relievers did the job out of the pen. As for Miami, lefty Michael Mediavilla allowed five runs on six hits in 4.3 innings.

• Little Rock’s Troy Alexander had a day to remember in a 12-6 road win over Oklahoma State. Alexander went 2-for-4 with a home run, double and four RBIs, while Nick Perez added a double and three RBIs and Eldrige Figueroa chipped in a four-hit performance.

• Coastal Carolina is red-hot to begin the 2018 campaign, beating a quality UNC Wilmington team 10-5 to improve to 8-2. Cory Wood had a double, three hits and two RBIs to lead the Chanticleers offensive charge, while Zach Biermann hit a home run.

• Maryland starting pitcher Mark DiLuia struck out seven, walked one and allowed four hits in four shutout innings, as the Terps beat VCU on the road, 2-0. Elliot Zoellner tossed two shutout frames, while three other relievers got the job done to close out the game.

• No. 10 Texas A&M struggled at the back-end of the game from a pitching standpoint, but still held off Incarnate Word, 9-7. Braden Shewmake had two hits and knocked in two runs, while Logan Foster hit his first home run of the season. Meanwhile, nine-hole hitter Allonte Wingate collected three hits.

• UNC Greensboro kept Wake Forest’s slow start going in an 11-5 road win. Andrew Moritz hit a home run and knocked in three runs, while Jake Kusz added a home run and Austin Embler and Cesar Trejo each finished the contest with four hits. As for the Deacs, they’re now 3-6 on the season.

• Alabama is now 9-0 in the Brad Bohannon era after beating Alabama State 11-1. Bama starting pitcher Mason Duke struck out seven and allowed just one hit in five shutout frames, while the offense was led by Hunter Alexander, who went 3-for-4 with two RBIs.

• Louisiana’s Colten Schmidt put together a dominant start in a 2-1 win over Nicholls. Schmidt struck out six, didn’t walk anyone and allowed five hits in seven shutout innings.

• South Florida brought out the bats in a big way in a 16-1 road win over Bethune-Cookman. David Villar had a huge night at the plate with a double, home run and two RBIs, while Garrett Zech had a triple, three hits and two RBIs.

• No. 18 East Carolina continued its red-hot ways Wednesday night with a 10-3 win over Old Dominion. Bryant Packard had a double and home run for the Pirates, while Chandler Jenkins also hit a home run in the victory.