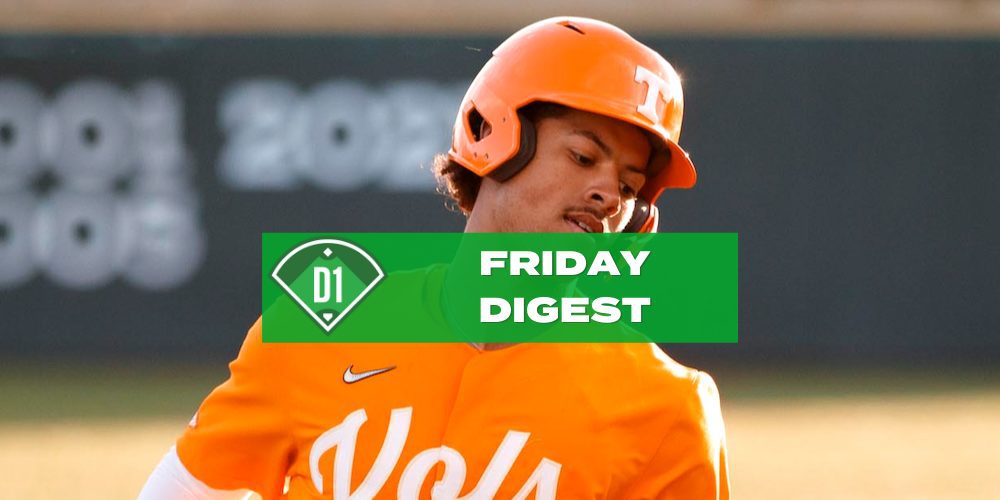 In one of the better series matchups of the weekend, 5-0 Alabama traveled to Austin to take on 5-0 Texas, the top-ranked team in the country. The first game certainly did not disappoint in what proved to be an intense pitching duel between these two previously undefeated clubs. Texas scored the go-ahead and eventual winning run on a wild pitch in the bottom of the seventh inning as the Longhorns pitching staff continued to flex its collective muscle.

Lefthander Pete Hansen got his usual start to kick off the weekend and struck out eight over the first five innings, doing a nice job keeping the Bama hitters off balance by sequencing well between his upper-80s fastball and mid-80s changeup. Travis Sthele picked up the win, his first of the year, by working two scoreless frames, and Aaron Nixon recorded his second save of the season, striking out a pair over 1 2/3 scoreless innings of his own.

Alabama starter Garrett McMillan was efficient over the first six innings, keeping Texas off the board with a sharp overhand curveball and a fastball that hovered right around 90 mph. Dylan Ray picked up the hard-luck loss in relief as Alabama recorded more hits (7) than Texas (5) but were unable to cross home plate. They did have the tying runner, Drew Williamson – who hit a one-out double – at third base with less than two outs in the bottom of the ninth but were unable to capitalize.

This game epitomized a classic West Coast battle. Although Sacramento State’s 4-0 start, beating Northern Illinois four times in as many tries last weekend, may not be as impressive as Long Beach State’s 2-1 start, which included a road series victory over the defending national champs, Mississippi State, the Hornets came to play on Friday just the same. Eli Saul worked the first 7 2/3 innings, striking out nine LBSU batters, as part of a 1-0 shutout as the Hornets emerged victorious over the Dirtbags.

It took free baseball for a run to be scored but right fielder Cesar Valero kicked off the 10th inning with a bang, hitting a solo home run to break the scoreless tie. Jack Zalasky pitched the final two innings of the game, including a perfect 1-2-3 bottom of the 10th, to pick up the win. LBSU starter Luis Ramirez continued to shine in the no-decision, striking out seven in seven shutout innings, giving him 13 scoreless frames to start the season.

Upset Of The Day: Northern Kentucky 7, No. 7 Mississippi State 6

Mississippi State has now played five games to open the 2022 season, all in the comforts of Dudy Noble Field, and the Bulldogs have lost three of them. After losing two of three games to Long Beach State to open the season, their most recent loss came against visiting Northern Kentucky.

The Bulldogs took a 2-0 lead in the bottom of the second inning before the Norse jumped ahead with a three-run third, headlined by a two-run double off the bat of Ryan Glass. They added single tallies in the fifth and sixth innings before putting a two-spot on the board in the seventh, with both runs scoring on bases-loaded walks.

The Bulldogs scored a pair of runs in the bottom of the eighth to pull within one run but went down 1-2-3 in the ninth. NKU third baseman Manny Vorhees went 3-for-5 with a pair of doubles and two runs scored in the win.

It’s not hard to find offensive heroes in the Tennessee lineup during its 27-1 win over Iona on Friday, but third baseman Trey Lipscomb pulled off a special feat, hitting for the cycle as part of a 5-for-5 performance. He scored three runs and drove in nine, adding an extra double for good measure. Lipscomb’s home run was a three-run blast in the first, and he added an RBI double in the second, a two-run double in the fourth and a bases-clearing triple in the fifth.

Amidst yet another offensive explosion – the Vols have now out-scored their opponents 76-5 in five games – freshman Chase Burns added five more strong innings to begin his collegiate career. He allowed one unearned run on four hits and a walk with four strikeouts as No. 18 Tennessee moved to 5-0.

Virginia also moved to 5-0 on Friday, enjoying a 24-9 barnburner over visiting Cornell after its 14-0 midweek win over VMI. Jake Gelof came up big in both contests but was especially loud Friday, going 3-for-3 with eight RBIs largely thanks to a pair of three-run home runs. UVA pitchers struck out 23 batters, 11 of which were recorded by live-armed lefthanded starter Nate Savino.

Utah righthander Matthew Sox fell two outs shy of tossing a no-hitter, striking out the first batter he faced in the bottom of the ninth inning before allowing a base hit to Fresno State center fielder Josh Lauck, which ended Sox’ day on the mound. The Utes held a 2-0 lead at that point but the Bulldogs made things interesting, as Lauck advanced to third base with less than two outs on a passed ball and a pair of walks, scoring on an RBI groundout before a strikeout ended the game. Sox allowed just the one run on the one hit, striking out six and walking two over 8 1/3 innings in the 2-1 win in the first game of the Tony Gwynn Legacy tournament.

The Seminoles’ ace pitched another gem, striking out 13 Samford hitters, allowing just one hit over seven innings of work in the 7-0 win. Messick moved to 2-0 on the year, with a 24-to-2 strikeout-to-walk ratio in 12 2/3 innings. No. 10 Florida State moved to 4-1 on the year.

The Ivy League made a triumphant return to college baseball on Friday after not playing for two seasons. Several teams within the conference had tough assignments that ended in lopsided losses, as Louisville knocked off Dartmouth, 19-5, Virginia took down Cornell, 24-9 and Auburn shut out Yale, 9-0.

In one of the earlier finishes of the day, Penn provided a stunner by beating Texas A&M, 2-1. Kevin Eaise and Owen Coady combined to shut down the Aggies’ offense, as Coady was particularly dominant, striking out eight in 4 2/3 scoreless innings of relief. Cole Palis drove home the go-ahead and eventual winning run in the top of the eighth inning with an RBI single.

Harvard made things even more interesting, taking down No. 24 Miami, 11-6, under the lights Friday night. The Crimson jumped on Miami starting in the third inning with three runs, adding two more in the fourth before tacking on two in the seventh and four more in the eighth to put the game out of reach. Zach Brown and Sawyer Feller each hit two-run home runs and Brown added an RBI double as part of a 3-for-5, three-RBI performance at the plate.

And make sure you watch the spectacular catch that ended the game in the video/tweet below.

Although East Carolina did rebound nicely from its opening weekend sweep against Bryant, beating Campbell on Tuesday 10-3, the Pirates wound up back in the loss column Friday as North Carolina emerged victorious, 7-4. UNC’s Vance Honeycutt and Alberto Osuna led off the bottom of the first and second innings with home runs, and a three-run third inning proved to be the difference in the game. The Pirates appear to be reeling without their ace, Carson Whisenhunt, as Garrett Saylor was roughed up for the second time in as many Friday games, allowing five runs over 2 1/3 innings. Pitching opposite Saylor was Brandon Schaeffer, who struck out five in five innings to move to 2-0 on the year for the 5-0 Tar Heels.

The Baylor Bears were greeted rudely to open the 2022 season a week ago, getting swept at the hands of a visiting Maryland squad. They have since won a mid-week contest against Houston Baptist and took down No. 23 Duke, 4-2, on Friday. Lefthander Tyler Thomas, who was plenty good in his Opening Day performance but was out-dueled by the Terps’ Nick Dean, evened his record at 1-1 by tossing six shutout frames. The biggest hit of the game came off the bat of Baylor catcher Harrison Caley, hitting a two-run single as part of a three-run sixth inning.

Down 4-1 heading into the seventh inning, West Virginia scored single runs in the seventh and ninth innings with a two-run eighth sandwiched in between to beat Charlotte, 5-4. The 49ers ace, Spencer Giesting, appeared to be in complete control over the first six innings of the game before turning things over to the bullpen.

Pinch hitter Evan Smith started the comeback for WVU with a sac fly, Dayne Leonard tied the game with a two-run single and Victor Scott II pushed WVU ahead with a bunt that scored Austin Davis, who singled to open the ninth inning and stole both second and third base before streaking home to score the go-ahead run on the suicide squeeze. Flame-throwing closer Jacob Watters picked up the win by working a pair of scoreless innings after Noah Short, Kevin Dowdell and Michael Kilker kept the 49ers in check during innings 5-7.

This game had a little bit of everything as Davis made a diving, run-preventing catch earlier in the game and Scott made a jaw-dropping catch over the wall in center field to rob a home run in the bottom of the eighth inning to set up the Mountaineers’ exciting finish.

• Peyton Chatagnier had an interesting stat line out of his usual leadoff spot on Friday, going 0-for-2 with three RBIs, hitting a trio of sac flies in No. 3 Ole Miss’ 10-4 win over VCU.

• Chance Huff struck out nine in six shutout innings of one-hit ball as part of No. 19 Georgia Tech’s 14-0 win over Gardner-Webb.

• Cooper Hjerpe had a similar line to Huff, striking out nine of his own in six innings, allowing three hits, as part of No. 14 Oregon State’s 9-0 win over Xavier.

• Hunter Barco struck out 12 batters in six innings, allowing a run on three hits and a walk as No. 15 Florida beat Georgia State, 4-1.

• Dylan Crews hit a two-run home run in the bottom of the first and a two-run triple in the third as part of No. 8 LSU’s 6-0 win over Towson.

• Luke Eldred and Ryan Johnson combined on a 2-0 shutout as Dallas Baptist took the first game of its series against Sam Houston State. Each righthander struck out four batters, Eldred over six innings and Johnson over three. Both DBU runs were scored on sac flies.

• Adam Mazur had a second impressive start for Iowa as part of the Hawkeyes’ 3-1 win over Pepperdine to kick off the Kleberg Bank Classic. Mazur moved to 2-0 on the year by striking out nine over 7 2/3 innings, allowing just three hits and two walks. He’s struck out 18 and allowed just four hits in 13 2/3 innings over the first two weekends of the year.

• Jonathan Fincher struck out eight in six innings as part of a 6-1 win for Louisiana Tech against visiting Tulane. Fincher is 2-0 for the 5-0 Bulldogs.

• Tony Neubeck pulled off the rare trick during Missouri’s 4-3 win over UL Monroe, tossing an immaculate inning in the bottom of the seventh inning, recording three strikeouts on nine pitches. He added a fourth immaculate victim in the top of the eighth, and overall the freshman lefthander fanned seven batters in 2 2/3 innings of relief as Mizzou improved to 5-1 to start the season.