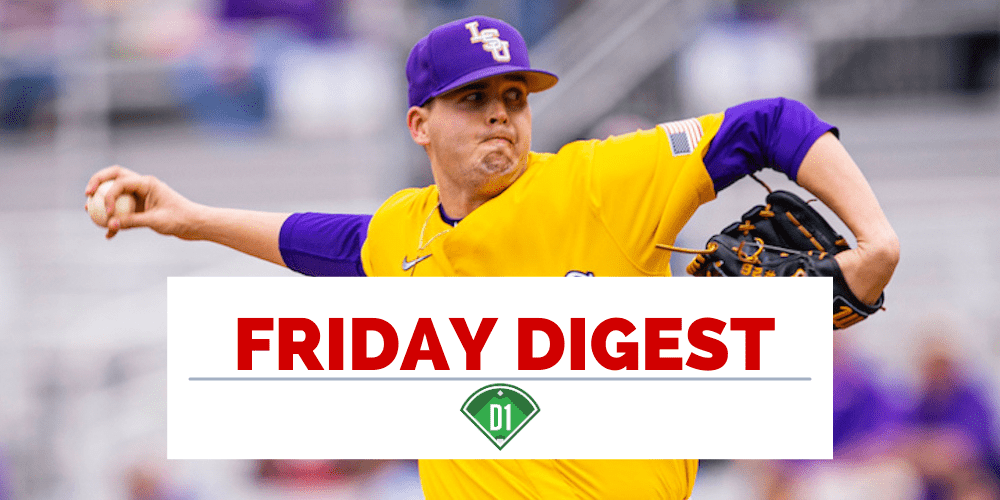 Team of the day: LSU

There’s no doubt there’s been a lot of criticism being thrown around so far this spring in Baton Rouge, and for good reason. Expectations simply aren’t higher than they are at LSU.

The Tigers entered the weekend series at Ole Miss with a good RPI. However, the conference record needed some serious work. Well, LSU won the series opener on Thursday night before clinching the series Friday night with a 7-2 triumph over the No. 12 Rebels.

First and foremost, LSU righthanded pitcher AJ Labas was outstanding against the Rebs. He tossed a complete game, striking out six, walking one and allowing just two runs in the process. Amazingly, he did allow 10 hits to the Rebels, but always found a way to wiggle out of jams.

The offense also took care of business late in the game. LSU got a three-hit performance from leadoff hitter Tre Morgan and two hits from Cade Doughty, while the biggest blast of the game came on a ninth-inning grand slam off the bat of Gavin Dugas to put the game out of reach.

Upset of the day: Baylor crushes No. 5 Texas Tech

Baylor has been red-hot as of late, and the Bears have now won 12 of their last 14 games after crushing No. 5 Texas Tech on the road, 12-4. BU didn’t leave much doubt early in this one, scoring seven runs in the first three innings to take total control.

Four Bears sluggers hit home runs in the game — Jack Pineda, Cade Currington, Davion Downey and Chase Wehsener. Pineda finished the game with two runs batted in, Wehsener had three hits and two RBIs and Andy Thomas chipped in a three-hit performance that included a double and an RBI. It was an uncharacteristic start for Tech lefthanded pitcher Patrick Monteverde, who allowed seven runs in four innings of work. As for BU, lefty Tyler Thomas kept Tech’s offense at bay, striking out seven, walking two and allowing just two runs on four hits in six innings.

To say it has been a frustrating ACC campaign for BC would be an understatement. After all, it honestly wasn’t that long ago that Mike Gambino’s club was actually in our Top 25. So, we’re not that surprised that the Eagles won the series opener against the No. 10 Fighting Irish, but it’s more so how they did it.

BC showed signs of life Friday afternoon in a dominant 10-0 triumph over the Irish. Ramon Jimenez had a massive day at the plate, hitting a three-run home run in the third inning before knocking in another run in the fifth inning. He finished the game with two hits and four RBIs. Daniel Baruch, Cody Morissette and Vince Cimini each had two hits as well, while Emmet Sheehan put together a strong start on the bump with 10 strikeouts and just three hits allowed in 6.1 innings of work.

Goodness gracious, what a performance Bourassa put together in a 5-0 win over Portland

• Vanderbilt righthanded pitcher Kumar Rocker threw the second complete game of his career in a 6-2 victory over Mississippi State. Rocker’s fastball velocity hovered in the mid-90s for the second-straight week, as he struck out eight, didn’t walk anyone and allowed just two runs on three hits in the start. State lefthanded pitcher Christian MacLeod, another talented prospect, struck out seven, walked four and allowed four runs in 3.2 innings of work, while for the Commodores, CJ Rodriguez led the way with three hits.

• Top-ranked Arkansas left no doubt as to who the No. 1 team in America will be on Monday, as it clinched a series win over South Carolina with a doubleheader split on Friday — losing the first game, 6-2, and bouncing back in the nightcap, 5-1. In the first game, Peyton Pallette put together a strong start for the Hogs with just two runs allowed in 5.1 innings of work, while the key for the Gamecocks was strong work from their bullpen — Andrew Peters and Brett Kerry combined for 4.1 scoreless innings. In the nightcap, Hogs lefthander Patrick Wicklander attacked the zone, struck out five and allowed a run and two hits in seven innings of work, while Kevin Kopps struck out every hitter he faced in two innings.

Our Aaron Fitt has observations on both Arkansas and South Carolina, here.

• What a terrific double header it was between No. 20 Old Dominion and No. 19 Charlotte. In the first game, Charlotte got off to a strong start, thanks to a three-run home run from David McCabe to take a 5-4 victory, while in the nightcap, the Monarchs responded in loud fashion with a 9-5 triumph. ODU talented righthanded pitcher Hunter Gregory tossed five shutout innings and six Monarchs finished the game with a hit. The two teams will now skip Saturday because of expected inclement weather before wrapping up the series with a DH on Sunday.

• Speaking of leaving no doubt, how about the performance put together by No. 25 Florida State in a 9-0 road win over Georgia Tech? FSU starting pitcher Parker Messick was strong yet again, striking out five in six shutout innings, while offensively, Matheu Nelson hit an absolute bomb and Jackson Greene also hit a home run.

• Keep an eye on NC State down the stretch in the ACC. The Pack picked up a 4-1 win over ranked Virginia Tech behind a strong start from righthanded pitcher Sam Highfill. Highfill struck out six, walked two and allowed just four hits in 6.2 shutout innings of work. Austin Murr led the Pack with a double and a home run, and his team’s RPI is now up to 61 with a 10-12 record in the ACC.

• Boy, can anyone slow down Oregon right now? Ducks starting pitcher Robert Ahlstrom struck out eight with no walks and allowed just three runs in eight innings of work in a 5-3 win over UCLA. It wasn’t a particularly offensive game by either team, but UO’s Sam Novitske had two hits and an RBI. As for the Bruins, righty Zach Pettway tossed five shutout innings before running out of gas.

• Western Carolina split a series with East Tennessee State Friday afternoon, but in the first game, WCU starting pitcher Zebby Matthews was terrific, striking out seven with no walks and just four hits allowed in a complete game shutout.

• Oregon State picked up a thrilling 7-5 win over Big West co-leader UC Irvine in a contest that was very much a see-saw battle. The Beavers scored two runs in the ninth inning on a Jacob Melton two-run home run to take a 5-4 lead. However, the Anteaters tied the game in the bottom of the inning on a Luke Spillane RPI single. OSU put the game away in the 11th on a big hit from Matthew Gretler. Ober finished the night with two hits, while Andy Armstrong had three hits.

• Ball State is arguably the best team in the MAC, along with Miami (Ohio), and the Cardinals got a pair of strong starts from John Baker and Chayce McDermott in a doubleheader sweep of Northern Illinois. Baker struck out eight, walked one and allowed a run in a complete game performance, while McDermott struck out 12 in six strong innings.

• Fairfield is your top-ranked RPI team in the land, and that continues after Friday’s action as the Stags swept a doubleheader from Manhattan in convincing fashion — 16-4 and 12-4. In the first game, Mike Handal had a game to remember with two homers, a double, three hits and six RBIs, while Sean Cullen also hit a home run … In the nightcap, Jake Noviello struck out eight in five innings, while offensively, Ryan Strollo had another big showing with three RBIs, while Cullen knocked in two more runs. Mike Bechetti also hit a home run for the Stags. Fairfield is now 24-0 on the season.

Want more on the Stags? Our Eric Sorenson was in Manhattan and has a report on the Stags, here.

• Nebraska continues to roll, and lefthanded pitcher Cade Povich is a huge part of its success. Povich tossed yet another gem in a 4-0 win over Michigan State, striking out five and allowing just four hits in seven shutout innings … Speaking of the Big Ten, Iowa defeated Maryland, 6-2, with Trenton Wallace allowing a run in 4.1 innings of work and Dylan Nedved allowing just one hit in three shutout innings.

• Creighton didn’t allow a run in a doubleheader sweep of Georgetown on Friday — 5-0 and 6-0. In the 5-0 victory, Cade Lommel tossed six shutout innings, Ryan Windham threw two no-hit innings and John Sakowski struck out one in an inning of work … In the second game, Dylan Tebrake struck out eight, walked one and allowed two hits in seven shutout innings.

• TCU slugger Phillip Sikes put together another impressive performance, hitting two homers and knocking in four runs as the Frogs destroyed Kansas, 15-1. Zach Humphreys also had a strong performance for the Frogs with a home run, four hits and three RBIS, while Brayden Taylor chipped in a three-hit performance.

• La Salle is now off to its best start in school history after a dominant 10-2 win over St. Bonaventure. Colin Scanlon put together a solid start for the Explorers, striking out nine, walking two and allowing two runs on three hits in seven innings, while offensively, Nick O’Day hit a home run, Nick Di Vietro had two hits and an RBI and Tatem Levins knocked in two runs. You can read a lot more about La Salle in my column, here.

• Tulane swept a doubleheader from Memphis on Friday afternoon, and has now won eight-straight games. They swept the DH by scores of 13-2 and 4-2. In the first game, Tulane’s Braden Olthoff struck out eight with no walks and allowed two runs in seven innings, while offensively, Bennett Lee had four hits and three RBIs, and Collin Burns and Chase Engelhard each hit home runs … In the nightcap, Tulane starting pitcher Jack Aldrich struck out 10 and allowed a run on two hits in seven innings.

• The ACC continues to be a wild league this spring, and that continued in Chapel Hill on Friday as North Carolina swept a doubleheader from Miami by scores of 4-2 and 6-5. In the first game, Austin Love struck out seven, walked two and allowed a run in 6.1 innings of work, while in the nightcap, Tar Heels starting pitcher Shawn Rapp struck out eight, walked two and allowed two runs on four hits in six innings, while Mac Horvath hit a home run and Angel Zarate had two hits and two RBIs.

• Dallas Baptist proved that at least for one night, Indiana State lefthanded pitcher Geremy Guerrero is human. The Patriots picked up an 8-5 win over the No. 21 Sycamores, and touched up Guerrero for five runs in 6.1 innings. Jackson Glenn led the offensive charge with a pair of homers, two hits and four RBIs, while River Town also hit a home run in the victory. DBU climbed 33 spots in the RPI (106) with the win.