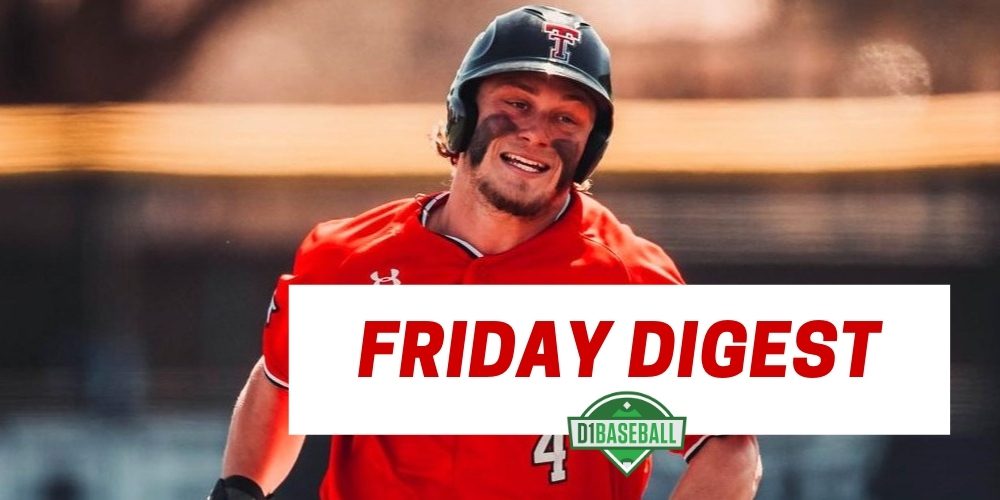 Texas Tech has been operating a MASH unit the past couple of weeks with a number of significant injuries throughout its roster. And it showed last weekend at home against Baylor. However, the Red Raiders showed toughness and intent Friday afternoon in a 6-3 win over Texas.

Texas starting pitcher Ty Madden tied his worst career start with six runs allowed in five innings of work. And it’s worth mentioning that after the game, Texas head coach David Pierce said Madden was dealing with a busted blister on his throwing hand.

With that said, the Red Raiders set the tone early in this one with five total runs in the fourth and fifth innings combined to take total control. Offensively, Cody Masters hit a home run, while leadoff hitter Dru Baker had a double, two hits and two RBIs. Dillon Carter capped off a huge day for the Raiders with a hit and an RBI. He also made two terrific defensive plays, one of them a run-saving diving play in the ninth inning.

While the offense did enough, the Tech bullpen rose to the occasion. Raiders lefthanded pitcher Patrick Monteverde allowed three runs on four hits in 4.1 innings, while Ryan Sublette had his 93-95 mph heater and mid-80s slider working in 2.2 innings of shutout baseball. Brendan Girton and Connor Queen closed out the contest for Tech.

Notre Dame is having such an incredible season, and the Fighting Irish — particularly the weekend rotation — had yet another strong start in a series opener Friday afternoon, a 4-0 win over North Carolina.

As for the Tar Heels, they wasted a strong start from righthanded pitcher Austin Love. Love struck out six, walked three and allowed just two runs on four hits in six innings.

With Louisville losing big to Clemson Friday night, the Fighting Irish are now a full two games ahead of the Cardinals in the Atlantic Division standings.

Anytime I’ve contributed to the Friday night digest on our site, it seems like Central Michigan righthanded pitcher Jordan Patty is almost always putting together an impressive performance. Well, he did just that yet again this afternoon in a 14-0 win over Miami (Ohio).

Patty tossed the first perfect game and 22nd no-hitter in school history in the seven-inning complete game performance. He struck out 11 in the start and threw 77 pitches in the process. Stuff-wise, Patty was anywhere from 88-90 mph with his fastball with some late life. He has been up to 93-94 at times this season, but sits in that 88-90 range. He also attacks hitters with both a slider and curveball, though neither offering is considered a wipeout pitch.

In addition to his star performance against the Redhawks, the Chips also made headway in the MAC. They are now tied with Ball State at 17-4 atop the MAC standings, while the Redhawks are now in fourth place and five games back.

CMU once again has the look of a regional-caliber club.

Arkansas appeared to be in quite a dog fight with LSU at full-capacity Alex Box Stadium Friday night, tied 0-0 entering the seventh inning. While Hogs lefthanded pitcher Patrick Wicklander was putting together a strong start for his team, LSU righthander Landon Marceaux was doing his part, too. Marceaux took a no-hitter into the seventh inning for the Tigers before Matt Goodheart singled to lead off the inning.

That hit by Goodheart apparently was the ignition to a high-speed race that left LSU far behind. The Hogs wound up scoring two runs in the seventh and five more in the eighth to take down the Tigers, 7-0.

Wicklander mixed his pitches well and put together yet another strong start, striking out five, not walking anyone and allowing just three hits in 6.2 shutout innings of work. Meanwhile, righthander Kevin Kopps came out of the bullpen and was unhittable as usual with five strikeouts in 2.1 shutout innings. Kopps has now retired 28-straight hitters, 19 via the strikeout. As for the Tigers, Marceaux struck out eight, didn’t walk anyone and allowed two runs on four hits in seven innings.

Offensively, and defensively for that matter, it was the Christian Franklin show for the Hogs. In addition to making a ridiculously impressive throw from right-center to third base in the game, he also had a huge night at the plate, hitting a two-run single in the seventh before capping off a strong performance with a three-run home run in the eighth inning.

Riding a four-series losing streak entering the weekend, there’s no doubt Ole Miss had some urgency as it wants to host a Regional in the NCAA tournament. In order to get back on track, it needed righthanded pitcher Gunnar Hoglund back in the rotation after some soreness kept him out of it against LSU last weekend.

Well, he was back in the rotation Friday night, and he was back to business in a 5-1 win over South Carolina. Hoglund struck out nine, didn’t walk anyone and allowed just one hit in six shutout innings against the Gamecocks. He tossed 73 pitches and threw 57 strikes.

Interestingly, hard-throwing Ole Miss righty Derek Diamond came out of the bullpen, struck out five and allowed a run in two innings, while the Rebels turned the game over to veteran righty Taylor Broadway to finish it off, and he struck out all three batters he faced. In all, 17 of the 27 putouts by the Rebels were accomplished via a strikeout.

The Gamecocks and Rebels could very well be jockeying for position to host a regional in a few weeks. That makes the final two games of this series crucial.

Thrice Is Nice For Grice

Good luck finding a player in college baseball with more raw power than Clemson two-way freshman Caden Grice. Our friends at Prep Baseball Report raved about his jaw-dropping pop during his high school days, and the first time I saw him take batting practice at Clemson last fall, he hit a ball over the batter’s eye in center field. On Friday, Grice went deep three times to power the Tigers to an 11-3 victory. The first two homers came against Louisville ace Michael Kirian. The third bomb is currently orbiting the planet. Take a look:

Grice finished just a two-run homer shy of the “home run cycle”, as he hit a grand slam, a solo shot and a three-run shot, finishing with eight RBIs. The Tigers also got seven innings of one-run ball from Mack Anglin, who struck out nine while allowing five hits and three walks. With the win, Clemson climbed back above .500 overall (19-18) and in the ACC (13-12).

The annual Vanderbilt-Florida matchup has become one of college baseball’s best rivalry series over the last decade, but the home team has dominated each of the last two matchups, as Vandy swept the Gators in Nashville in 2019, and Florida swept the 2018 matchup in Gainesville. That trend ended on Friday, as Vanderbilt jumped out to an early 6-0 lead and cruised to an 11-7 win in the series opener at Florida Ballpark. Jack Bulger and CJ Rodriguez led a balanced Vandy attack with three RBIs apiece in support of Kumar Rocker (5 IP, 4 H, 2 ER, 4 BB, 8 K), who battled his way through five inefficient innings to earn the win, improving him to 10-1 on the season.

Bulger’s two-run double in the second broke the game open, and Florida never got close thereafter. Isaiah Thomas added a two-run homer to give the Commodores more of a cushion.

Tulane Makes It A Dozen Straight

The Green Wave kept on rolling Friday with a doubleheader sweep of Houston, extending the nation’s second-longest winning streak to 12 games (only Fairfield has a longer active streak). Preseason All-American Braden Olthoff was the story in the first game, striking out 12 without issuing a walk over eight shutout innings to lead Tulane to a 3-0 victory. And Chase Engelhard led the Green Wave to an 11-4 win in the nightcap, homering and driving in four.

Tulane is now 12-1 in the American Athletic Conference, a game and a half ahead of 11-3 East Carolina, which split a doubleheader against Wichita State on Friday.

Rutgers was the big story in the Big Ten after winning two of three at Michigan last weekend, as our Patrick Ebert detailed in this week’s Midwest Connection. But the road didn’t get any easier this weekend for the Scarlet Knights, who are making their second straight road trip to a Top 25 opponent. And Rutgers stayed hot Friday with a 9-4 win against No. 22 Nebraska. Ace lefty Harry Rutkowski turned in six strong innings in a no-decision, and Rutgers erased a 3-2 deficit with four runs in the eighth, then tacked on three more in the ninth to salt it away. Evan Sleight led the Rutgers offense with two hits and two RBIs. The Scarlet Knights are now 15-13, and they’ve already won series against Maryland, Ohio State, Northwestern and Michigan. One more win this weekend would give them a fifth impressive series win against a Big Ten regional contender, giving their at-large hopes another big boost.

Preseason No. 13 NC State and preseason No. 16 Virginia were two of the biggest disappointments of the season’s first half, but both clubs are working hard to salvage their postseason dreams in the month of April. The Wolfpack won the opener of its road series at Wake Forest on Friday to run its winning streak to five and climb above .500 in the ACC at 13-12 (after starting the season 1-8). Jonny Butler went 3-for-5 with a homer, a double and three RBIs to lead the NC State offense, and Evan Justice delivered three scoreless innings out of the bullpen. Terrell Tatum hit two homers to spearhead a five-homer attack for the ‘Pack, its first five-homer game since 2018.

Virginia started 4-12 in ACC play but then won series at Georgia Tech and Clemson, dropped two of three to Louisville, and won another series against Duke. The Cavaliers followed that up with a big midweek win against Liberty and then opened a critical road series at Virginia Tech with an 18-1 blowout victory on Friday, improving them to 12-16 in the league. Kyle Teel and Nic Kent had a home run and four RBIs apiece to lead Virginia’s 17-hit onslaught in support of Andrew Abbott (7 IP, 4 H, 1 R, 0 ER, 0 BB, 8 K). Teel’s three-run homer gave him plenty of breathing room in the fifth.