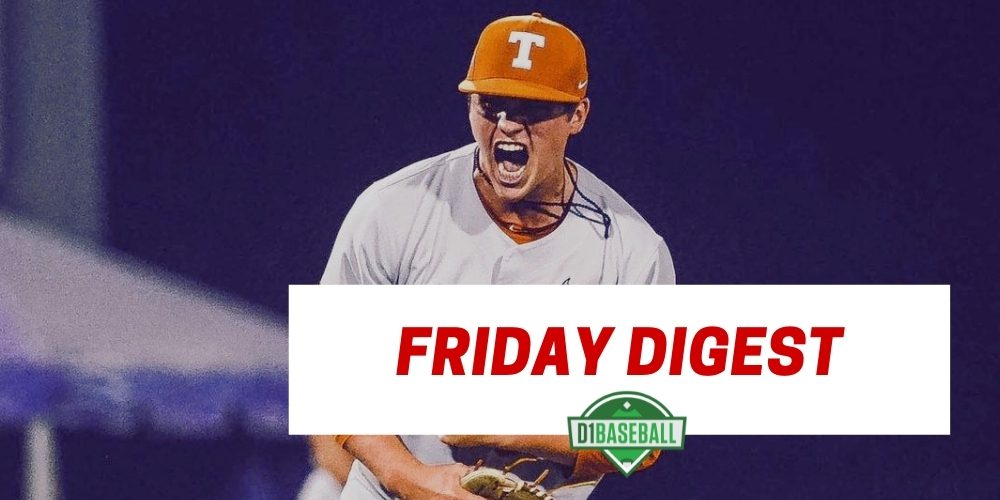 TEAM OF THE DAY: Texas

TCU entered the weekend with a two-game lead atop the Big 12 standings over Texas, and the Frogs ended the first day of the weekend just one game ahead of the burnt orange after a 5-4 loss in a thrilling contest that came down to the final pitch.

Texas righthanded pitcher Ty Madden gave the Longhorns six gritty innings, striking out five, walking three and allowing three runs on five hits in six innings, while the Texas bullpen rose to the occasion thanks to three freshman pitchers — Lucas Gordon, Tanner Witt and Aaron Nixon. Witt and Nixon were the ringleaders, with Witt striking out three in two shutout innings and Nixon finishing out the final frame with two strikeouts in a scoreless inning of work. TCU had runners on second and third with two outs in the ninth before Nixon induced a pop up to end the game.

Mike Antico hit a massive home run in the eighth inning to give the Longhorns the lead once and for all, and he finished the night with two hits. Meanwhile, Zach Zubia and Mitchell Daly each had two hits and Ivan Melendez had three hits.

The game was terrific, and the atmosphere in Fort Worth was super-regional like. Let’s hope for two more games like that this weekend.

Louisville seemed to make a strong midweek statement with a win over Vanderbilt. However, the Cardinals took a sizable step back in the series opener and a 13-3 loss to a struggling Duke club. Peter Matt hit a three-run home run in the first inning to get the Blue Devils started, and he finished the game with two homers, a double and knocked in a whopping six runs. RJ Schreck also hit two homers for the Blue Devils, while Erikson Nichols had two hits and three RBIs. On the mound, Jack Carey struck out five and allowed a run on four hits in seven innings, while U of L lefty Michael Kirian scuffled, allowing eight runs on nine hits in 6.1 innings of work.

• Texas A&M has had a tough season to date, but Will Frizzell provided the Aggies with some heroics Friday night with a walk-off home run in the bottom of the ninth inning to capture a 9-8 victory over No. 12 Ole Miss. Frizzell hit two homers in the game and knocked in three runs. Meanwhile, more bad news could be on the horizon, as righthanded pitcher Gunnar Hoglund left the game early because of forearm stiffness. Hoglund had just returned from an injury over the past couple of weeks.

• Washington State is moving closer and closer to being in the mix for an NCAA at-large spot, as the Cougars recorded a series-opening 5-2 win over No. 25 UCLA. Brandon White put together a quality start for the Cougars, as the righty struck out three and allowed two runs on six hits in 6.1 innings, while offensively, Tristan Peterson led the charge with a home run.

Who cares that he got a no decision, thanks to some mighty fine pitching from Middle Tennessee as well in a 2-1, extra-inning, win for the Golden Eagles. Stanley, a veteran righthander who struggled on the road against Rice last weekend, was outstanding in a win over the Blue Raiders, striking out a whopping 16 batters, not walking a single batter and allowing just two hits in nine shutout innings of work.

NC Central is ending its program at the end of the season, and we’re certainly not happy about that. But righthanded pitcher Austin Vernon is giving them a season to remember. Vernon was electric Friday afternoon in an eight-inning no-hitter against Delaware State, where he consistently sat 94-98 mph with his fastball. The righty struck out eight and walked one. And for the season, he now has a 2.73 ERA in 56 innings of work, along with 87 strikeouts and 25 walks.

• Florida State hit the road and took the ranked series opener against Notre Dame, 5-2. The Fighting Irish have yet to lose an ACC series, so the Saturday contest looms large. On Friday, FSU lefthander Parker Messick was impressive, striking out eight, walking just three and allowing a run on three hits in six innings, while Jack Anderson allowed just one run and a hit in three innings out of the bullpen. Elijah Cabell hit a home run for FSU, and the Seminoles might have the upper hand Saturday after the Irish used reliever Tanner Kohlhepp 50-plus pitches in the opener.

More ACC: Boston College starting pitcher Emmet Sheehan struck out 15 in seven innings of work, but somehow that wasn’t enough in a 4-1 loss to Pittsburgh. Pitt got back on track with Mitch Myers allowing just a run and four hits in 7.1 innings of work, and Jordan McCrum shining out of the bullpen with 1.2 shutout innings … Georgia Tech got a strong start from lefthander Brant Hurter in a 6-1 win over Clemson. Hurter struck out eight, didn’t walk anyone and allowed just one run on five hits in seven innings, while Sam Crawford tossed two shutout frames out of the bullpen.

• Rutgers has been one of the hottest teams in college baseball over the past couple of weeks, but No. 24 Indiana finally cooled it off with an 8-3 victory Friday afternoon. Indiana starting pitcher Tommy Sommer put together a strong start, striking out six, walking one and allowing just two runs in 6.2 innings of work, while Collin Hopkins and James Espalin led the offense with two hits and two RBIs a piece … Elsewhere in the Big Ten, Illinois starter Andrew Hoffmann had a brilliant performance in a 2-0 win over Maryland. Hoffmann struck out 12 and allowed just three hits in 7.2 shutout innings.

• Speaking of red-hot teams, Tulane entered the road series against East Carolina with a full head of steam. But at least in the series opener, Cliff Godwin’s club held the Green Wave in check. Gavin Williams struck out nine, walking one and allowed just two runs and two hits in 5.1 innings of work, while offensively, Bryson Worrell and Seth Caddell each hit home runs, and Connor Norby continued his ridiculous hitting this season with four hits, one a home run, and four RBIs.

Our Aaron Fitt has more on ECU’s win, here.

• Samford scored 36 runs in two games in a doubleheader sweep of VMI on Friday, and how about the night Brooks Carlson had the plate? The hard-hitting slugger smacked a grand slam and knocked in seven runs in the first game before tallying a pair of hits in the second game.

• We said earlier this season that the one thing that could potentially hold No. 1 Arkansas back was the lack of a premier ace pitcher in the weekend rotation. Well, it appears the Hogs finally have that guy in lefthanded pitcher Patrick Wicklander. Wicklander has been terrific the past few weeks, and was the same Friday in a 3-0 win over Georgia. Wicklander struck out nine and allowed just six hits in 5.2 shutout innings, while righthander Kevin Kopps was strong yet again out of the pen with three strikeouts in three shutout innings.

• Mississippi State might have put together the most dominant performance of any ranked team on Friday night, crushing South Carolina 9-0 on the road to open that series. Bulldogs lefthanded pitcher Christian MacLeod was terrific in the opener, striking out six, walking two and allowing a hit in seven shutout innings, while offensively, Kamren James had three hits and four RBIs and Tanner Allen had three hits and two RBIs. Rowdey Jordan also chipped in a solid two-hit performance.

• Let’s give a hat tip to Vanderbilt outfielder Enrique Bradfield in a 9-6 win over Alabama. It’s not everyday that someone upstages Kumar Rocker on a given night, but Bradfield certainly did that in the win over the Bulldogs, hitting his first career home run and finished the night 4-for-4 with five RBIs. As for Rocker, he struck out 13 and allowed six runs and six hits in five innings.

• Florida was down to its final out and on the verge of losing a series to Kentucky on the road. However, Cory Acton tied the game at 5-5 in the ninth inning on an RBI single and Kendrick Calilao sent UK fans home in heartbreak later in the inning when he cranked a three-run home run to make it 8-5 and to give the Gators the victory. While Calilao had the big blast in the ninth, Jud Fabian had a strong performance as well with a pair of homers.

• Oregon was surprised on the road last weekend in a series loss to Washington State, but the Ducks responded in impressive fashion Friday night in an 8-0 win over Washington. Robert Ahlstrom had a terrific start for Waz’s club, striking out 11 and allowing just four hits in seven shutout innings, while Gavin Grant hit a home run and Josh Kasevich knocked in three runs.

• Central Michigan took the series opener against Ball State, 7-3, and increased its lead in the MAC to a full two games over the Cardinals. Jordan Patty put together another solid start for CMU, striking out three and allowing just two earned runs on seven hits in seven innings, while Jakob Marsee led the offense with a home run … Speaking of the MAC, Ohio had a big day with a doubleheader sweep of Miami (Ohio), which is now down to 7th in the conference standings. Joe Rock struck out 12 and allowed one run in six innings in the first game, while Ed Kutt struck out 10 in eight shutout innings in the second game.

• Big West Battles: Long Beach State starting pitcher Johnathan Lavallee put together a terrific start in a 4-0 road win over UC Riverside. Lavallee struck out 13, didn’t walk anyone and allowed just two hits in a complete game shutout … UC Santa Barbara’s Jordan Sprinkle went 5-for-5 with an RBI, while Chris Cummings hit a home run and tallied three RBIs in a 6-5 win over UC Irvine. The Gauchos lead the league by just one game.

• Baylor is one of the hottest teams in the country right now, and it continued its impressive ways Friday night in a 17-2 win over Kansas State. The Bears got a stellar showing from Jack Pineda, who had a triple, home run and four RBIs, while Kevin Nevin and Andy Thomas tallied three-hit performances and Jared McKenzie went 3-for-5 with a home run and four RBIs. BU is now just one game out of third place.

• Liberty continues to dominate the Atlantic Sun, and weekend starting pitcher Trevor Delaite put together a strong start in a 4-0 win over Kennesaw State. Delaite struck out five, walked two and allowed just five hits in a complete game shutout win over the Owls.

• VCU extended its winning streak to a whopping 14 games Friday afternoon with a doubleheader sweep of Saint Louis — 14-6 and 19-4. Six Rams had multi-hit games in the first contest with Hunter Vay hitting a home run in the contest, while in the second game, Josh Simon led the way for VCU with a pair of homers.