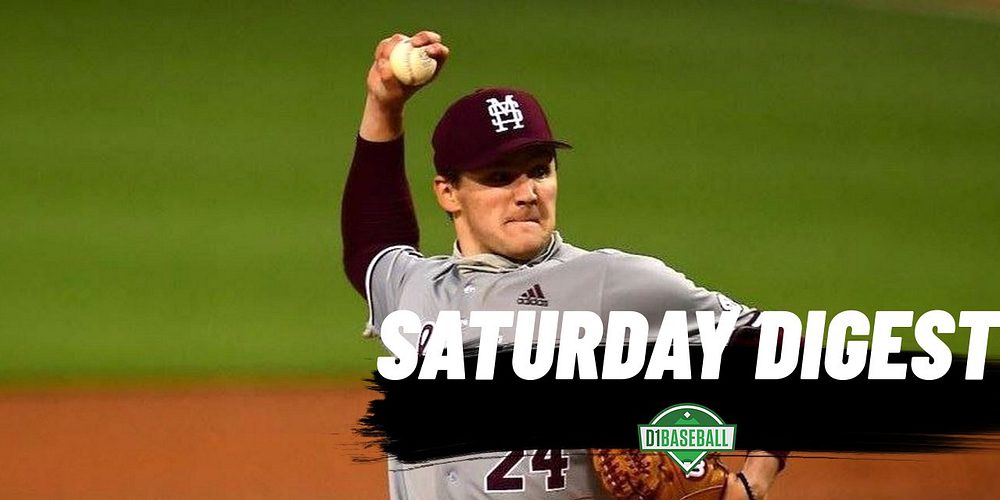 Team of the Day: Mississippi State

Following a Friday win in Baton Rouge over No. 19 LSU, No. 3 Mississippi State will at worst keep pace with the two SEC teams they’re chasing in the Top 25, thanks to an impressive 3-0 win on Saturday to claim the road series. Will Bednar made his first weekend start of the year and tossed five scoreless innings, striking out seven and walking just one; he has yet to give up a run this season. Preston Johnson and Landon Sims each chipped in with a pair of scoreless frames with Sims picking up his second save of the season, striking out a pair of batters to give him 32 in 13 2/3 innings this year over six relief appearances.

While the pitching staff held a dangerous LSU lineup to five base hits, Mississippi State managed only four of its own, manufacturing single runs in the fifth, eighth and ninth innings to move to 16-3 on the year. LSU righthanded pitcher Landon Marceaux put together yet another impressive start, but didn’t get any help at the plate.

Upset of the Day: Florida State over No. 6 Miami

Have a week Florida State. For the second night in a row, FSU claims this distinction as the Seminoles certainly are taking care of their in-state rivals this week. They’ve outscored No. 5 Florida and No. 6 Miami 32-4 in three games and will go for the sweep of the Hurricanes on Sunday.

Florida State’s Nos. 2-4 hitters have been especially productive as center fielder Logan Lacey, right fielder Robby Martin and catcher Matheu Nelson are a combined 20-for-44 in FSU’s three games so far this week with 17 runs scored and 20 RBIs. Nelson was especially productive in Saturday’s 9-1 win, hitting a two-run homer in the top of the first and a two-run single in the sixth to put the game out of reach.

This choice was easy, and we didn’t have to wait long to have our minds made up for us.

Thanks to a brilliant 16-strikeout no-hitter by Jack Leiter, Vanderbilt put together a nice little Saturday. In the process the ‘Dores pass the first test of the long and grueling SEC season, taking down No. 16 South Carolina, the latest victim of the Kumar Rocker-Jack Leiter dynamic duo.

Both righthanders are now 5-0 while creating must-see TV moments on a weekly basis. D1’s David Seifert was on hand to watch Leiter and the ‘Dores on Saturday; Leiter’s fastball peaked at 97 mph, still sitting at 94-95 in the ninth.

With each passing week evaluators are being more and more challenged to try and figure which Vanderbilt flamethrower will go higher in the draft. Now that his ERA has dropped to 0.31 on the year, statistically speaking Leiter has the edge over Rocker (0.58), with a narrow 49-to-48 edge in punchouts as well. Leiter has only allowed one earned run this season in 29 innings while Rocker has allowed just two in 31.

• For the second straight day, Louisiana Tech received a stellar pitching performance that resulted in a complete game shutout. After Jonathan Fincher shut down Tulane on Friday Ryan Jennings followed suit, going the distance and allowing just two base hits, striking out six and walking two in a 4-0 win. In fact, it’s the third complete game shutout in four games for Louisiana Tech as Jarret Whorff completed the feat against No. 1 Arkansas last Sunday.

In between those games was a 13-1 clobbering of No. 4 Ole Miss in which usual ‘pen arm Cade Gibson gave up just one earned run in 7 1/3 innings. The Bulldogs moved to 12-5 on the year with the win Saturday and go for the sweep over Tulane looking to extend their Sunday record to 5-0 on the season.

• In a Mel Allen, “How about that?” moment, Ryan Cole – Friday night’s hero for Notre Dame who hit a walk-off, two-run home run in the 13th inning – hit another two-run home run on Saturday, this time of the inside-the-park variety. They’re the first two home runs of Cole’s college career, a fourth-year junior. Niko Kavadas added a three-run oppo bomb and John Michael Bertrand went the distance to move to 3-0 while securing the 6-2 victory and the series against Duke.

Additionally, four of the teams ranked from 11-25 that won on Friday ended up losing on Saturday (UCLA, Tennessee, Oklahoma State, UC Santa Barbara). Taking out Michigan, a team hosting a Big Ten pod with Illinois and Michigan State, 10 of the 15 teams are playing rubber matches on Sunday.

• Two of the teams ranked in the Top 10 will also be playing rubber matches on Sunday, No. 1 Arkansas and No. 7 Texas Tech.

After a 16-1 pounding at the hands of visiting Alabama, Arkansas got back on track on Saturday with Zebulon Vermillion on the mound. The Z-Man allowed just one run on one hit and a pair of walks over the first eight innings of the game, striking out four along the way. Right fielder Cayden Wallace and catcher Casey Opitz each enjoyed three-hit days, with Opitz putting the Hogs on the board first with a solo shot in the third inning, his first of the year.

For the Red Raiders, lefthander Patrick Monteverde struck out three over the first six innings and righthander Micah Dallas fanned five over the final three frames to keep the Oklahoma State offense in check. Monteverde moved to 4-0 on the year with the win.

• After losing a midweek game to Florida State, the fifth-ranked Florida Gators had a loud opening to SEC play by sweeping visiting Texas A&M. This was a complete team effort for the Gators, whose pitching staff allowed just six earned runs in three games, and only one of those by a previously suspect bullpen. Jud Fabian hit two of his eight home runs on the weekend, going 3-for-4 on Saturday with a solo blast and a pair of runs scored. Florida is now 16-5 and has won 15 of their last 18 games since losing their opening weekend series to Miami.

• Benjamin Cowles is swinging a red-hot bat for Maryland and came up big once again on Saturday in Maryland’s 19-10 win over Penn State. Playing shortstop, Cowles went 3-for-4 with a pair of runs scored, a pair of walks and five RBIs. He had a two-run single and a three-run homer in addition to a double and is now batting .429 with seven home runs on the year.

• Kenyon Yovan has been a big part of Oregon’s success so far this year and he was at it yet again on Saturday, hitting a two-run bomb – his sixth of the year – in the third that put the Ducks on the board. He was on base when teammate Gabe Matthews added another two-run bomb in the sixth, which proved to be more than enough runs needed in Oregon’s 7-1 win over visiting Arizona State. Starter Cullen Kafka moved to 2-0 on the year with seven shutout innings of four-hit ball, striking out 11.

• Oklahoma is enjoying an impressive 3-0 week so far with a midweek win over No. 1 Arkansas and a pair of wins over Houston to open their weekend series in Norman. Saturday’s game was a 19-1 dismantling of the Cougars in which an impressive showing by the pitching staff got overlooked by an offensive explosion.

An incredible start to the season by first baseman Tyler Hardman continues, although his 3-for-4 performance looks fairly tame when compared to what some of his teammates accomplished. Conor McKenna, Brandon Zaragoza and Breydon Daniel each drove in four runs and things truly got out of hand when Jace Bohrofen hit his first collegiate home run, a three-run shot, as a pinch hitter in the seventh to make it a 19-0 ballgame. The 11-7 Sooners are now slashing .322/.426/.475 as a team.

• One more offensive drubbing to report, a 22-7 win for Cincinnati over Xavier. The outbreak is especially notable as the Bearcats are only bating .247 as a team and averaging roughly five-and-a-half runs per game.

The numbers are fun to look at, starting with leadoff hitter Cole Harting, who enjoyed a 6-for-6 day at the plate with a pair of home runs, four runs scored and five driven in. Jace Mercer had two base hits and four RBIs, three of which came on a three-run home run. Tanner Holen went 3-for-5 with four runs scored and three RBIs, hitting a solo shot in the second inning. And last but certainly not least Paul Komistek went 4-for-4 with three runs and seven driven in, four of which came on a seventh-inning grand slam.

Patrick Ebert
wpDiscuz
You are going to send email to