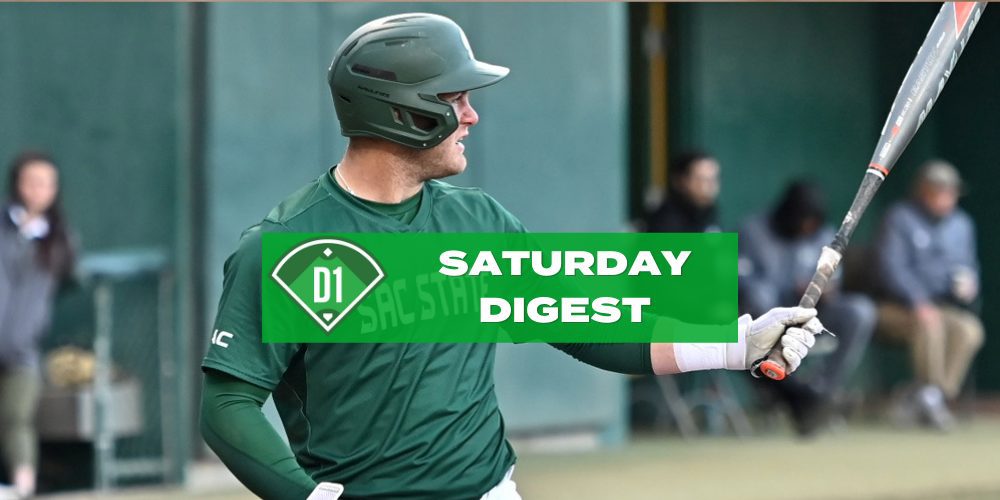 We’re only two weeks into the season, but as of now, North Carolina looks like the team that was expected to be Top 15 in the country, not East Carolina. The Tar Heels put together a strong performance for the second-straight day to beat the Pirates, 2-0, to clinch the series. UNC righthanded pitcher Max Carlson pieced together a solid start, striking out five, walking one and allowing just four hits in 5.2 shutout innings, while the bullpen did a fantastic job as well with Davis Palermo tossing 1.2 shutout frames and Caden O’Brien earning his third save already with a trio of strikeouts in the ninth inning to close it out. Vance Honeycutt, another fantastic freshman in the Triangle, had two hits to lead the UNC offense. Our Aaron Fitt has much more on UNC, here.

Player of the Day: Tommy White, 1B, NC State

You might as well get used to White’s name being in this category. The hard-hitting freshman hit five homers on Opening Weekend, and that apparently was just the tip of the iceberg. He’s back at it again this weekend, hitting another home run, a double, tallying three hits and knocking in four runs in the first game of the day — a 12-10 win over Quinnipiac. Then, in the nightcap, White hit yet another home run and knocked in four more runs. So, how about this? For the season now, White is hitting .588 with a double, nine homers and 29 RBIs, along with a 1.412 slugging percentage and a .650 OBP. Not bad for a true freshman.

Upset of the Day: Sacramento State over No. 12 LBSU

For the second-straight day, the Hornets were victorious over the Dirtbags, clinching a series victory with a 5-4 win. Noah Lucchesi put together a strong start for the Hornets with five shutout innings, while Jack Zalasky closed out the contest in style with 2.1 shutout frames. After being the hero in the series opener, Cesar Valero was back in business yet again on Saturday with a two-hit, two-RBI performance, while Gunner Gouldsmith finished the night with three hits, and Steven Moretto hit a massive home run that broke a tie in the eighth inning. Statement made for Reggie C and Co.

• Utah has been one of the better stories the first two weeks of the college baseball season. The Utes improved to 4-0-1 for the season Saturday night with a 4-0 win over San Diego State. Utes righthanded pitcher Randon Hostert put together a strong start, striking out eight, walking three and allowing just three hits in 6.2 shutout innings, while Ben Kibbe was terrific out of the pen, striking out three in 2.1 shutout innings.

• Oregon State improved to a perfect 7-0 on the season with a 5-4 win over Xavier to sweep that series. Wade Meckler provided yet another spark atop the lineup, hitting a triple and tallying three total hits, while Jacob Melton and Garrett Forrester each had two hits to lead the Beavers charge. Jake Pfennigs only went two innings for the Beavers, but Jacob Kmatz did the job out of the bullpen with 3.1 shutout innings.

• Texas A&M-Corpus Christi is taking care of business at its hosted tournament down at the Kleberg Classic. The Islanders won their first game of the tourney Friday night against Wichita State before making an even bigger statement Saturday night in a 2-1 win over a solid Iowa club. A&M-Corpus veteran pitcher Leo Perez was good against the Hawkeyes, striking out five, walking one and allowing just a run in six innings. Meanwhile, Connor Schultz put together a solid start for UI, striking out seven and allowing a run on two hits in five innings.

• Top-ranked Texas continues to pitch at an incredibly high level. The Longhorns clinched a home series win over Alabama with a 2-0 victory. Tristan Stevens led the charge for the pitching staff, striking out four and allowing just four hits in six shutout innings, while freshman lefty Luke Harrison entered the game and impressed, too, with three shutout frames and four strikeouts. Crimson Tide starting pitcher Antoine Jean had a solid start wasted, as he struck out two and allowed just two runs in five innings of work. Hunter Furtado was electric out of the pen, too, getting up to 94-95 mph with his fastball and tossing three shutout frames. As for Texas, its pitching staff has now allowed just three earned runs in seven games. That’ll play.

• Major kudos to BYU. The Cougars lost their first two games of the season to Indiana State and Marshall, but they’ve since won five-straight games, sweeping Arizona State this weekend in impressive fashion. While the Cougars beat the Devils in close fashion in the first two games, they erupted for 19 runs in the series finale in a 19-3 triumph. BYU outscored ASU 29-10 in the three games.

• No. 17 TCU continues to impress in the start of the Kirk Saarloos era. The Horned Frogs defeated Nebraska, 8-3, on Saturday to clinch a series win over the Huskers. And the biggest story line of the day? Righthanded pitcher Riley Cornelio, who looked great in the fall, put together a solid start in the victory. Cornelio struck out seven and allowed just two runs in six innings of work. While the Frogs are off to a strong start, Nebraska continues to scuffle. The Huskers dropped to 1-5 on the season with the setback.

• West Virginia almost picked up a massive road series sweep over Charlotte but is more than fine to settle for a huge road series victory. WVU started the afternoon in impressive fashion, beating the 49ers 9-2 with starting pitcher Ben Hampton striking out seven and allowing just a run in 5.2 innings of work. Offensively, leadoff hitter Austin Davis led the way with two hits and four RBIs … The Mountaineers were close but unable to finish off the sweep in the nightcap, a 5-4 setback. Still, what a weekend for Randy Mazey’s club. They deserve to be discussed for next week’s Top 25 rankings.

• For the second-straight day, No. 22 Maryland got outstanding starting pitching and picked up an impressive win, beating Campbell 9-2 to clinch a road series victory. Terps hurler Jason Savacool was terrific, striking out 10, walking one and allowing just two runs in seven innings, while offensively, Maxwell Costes and Luke Shliger each finished the night with two hits.

• Wichita State entered the season with high expectations, so it was surprising to see it enter this weekend with an ugly, winless record. Well, the Shockers entered the win column Saturday afternoon with a 5-2 triumph over Pepperdine. WSU’s Payton Tolle was terrific on the mound, striking out seven, walking one and allowing a run on six hits in 6.1 innings, while offensively, the top four hitters in the lineup combined for eight hits, with Sawyre Thornhill and Garrett Kocis each hitting home runs. Nice work, Shockers.

• Texas State entered last season with high hopes, but the season didn’t go as planned. Well, the Bobcats appear to be making some amends so far this season, improving to 7-1 with a series-clinching 8-5 win over Ohio State. John Wuthrich had a huge afternoon for the Bobcats with a pair of doubles and three total hits, while the bullpen closed things out.

• Tap the brakes a little bit, Tennessee. Save some runs for later in the season. Goodness, gracious, the Volunteers offense went bonkers yet again in a 29-0 win over Iona. And with that result, the Vols have scored 56 runs in two games so far this weekend. Today, Trey Lipscomb had three more hits – one a home run and another a triple, while Christian Moore, Christian Scott and Jordan Beck each hit homers. Tennessee’s insane offensive production overshadowed a gem from righthanded pitcher Chase Dollander, who struck out 10 in five shutout innings. Pretty good start to the season for Tony V’s club, I’d say.

• Not today, Norse. On Friday, the defending champs were stunned by Northern Kentucky. But there wasn’t a repeat performance on Saturday as Mississippi State responded with a 10-1 victory. Kamren James, Logan Tanner and Brad Cumbest each hit a home run for the Bulldogs, while Luke Hancock chipped in a two-hit performance. Meanwhile, righthanded pitcher Preston Johnson had a quality start in the win, striking out five and allowing just a run and two hits in 6.1 innings.

• What in the world has gotten into Oregon the past few games? The Ducks dropped their first three games to San Diego last weekend, but a 20-plus run onslaught on Monday apparently has sparked this team. UO scored 23 runs in a win over St. John’s Friday afternoon before crushing the Johnnies yet again, 16-3, on Saturday to clinch a series win. Brennan Milone led the offensive charge with a home run, two hits and four RBIs, while Drew Cowley had four hits and two RBIs. Ducks leadoff hitter Tanner Smith added a three-hit performance. He detailed Oregon’s rough opening weekend, here, earlier this week.

• Bryant had an outstanding Opening Weekend against No. 25 East Carolina, but the Bulldogs are finding life on the road a little more challenging this weekend, losing the first two games to Davidson, this time 9-2 to drop the series. Davidson’s Ryan Feczko struck out five and allowed just one earned run in 4.2 innings, while Ryan Kutz tossed three shutout frames out of the bullpen. Garrett Browder led the offensive charge for Davidson with a pair of hits and two RBIs.

• James Madison righthanded pitcher Donovan Burke had an afternoon to remember in a 4-0 win over Fairleigh Dickinson. Burke struck out 13 and allowed just one hit in seven shutout innings. He walked just one batter and tossed 63 strikes in his 93 pitches.

• Speaking of great pitching performances, how about Cal Poly ace and outstanding righthanded hurler Drew Thorpe? Thorpe struck out 10, walked one and allowed just four hits and a run in seven innings in a 5-1 win over Missouri State.

• How often does St. Peter’s get love in our daily roundup? The Peacocks deserved it today. The Peacocks won just four games last season but have already won three – they’ve taken the first three games this weekend from Coppin State to clinch that four-game set. Tom Buckman had two hits in a 9-2 victory in the second game of a doubleheader, while in the first, Matthew Dubois put together a solid start, striking out six and allowing just three runs in 6.1 innings.

• Could the surprise team in the WCC be Portland? The Pilots had another strong offensive performance Saturday, scoring 11 runs and double digit runs for the second-straight day in an 11-4 series-clinching win at San Jose State. Trace Tammaro hit a home run for the Pilots, while Jake Holcroft also had a big day at the plate with three hits and three RBIs, along with a pair of walks. Portland is now 7-0 on the season.