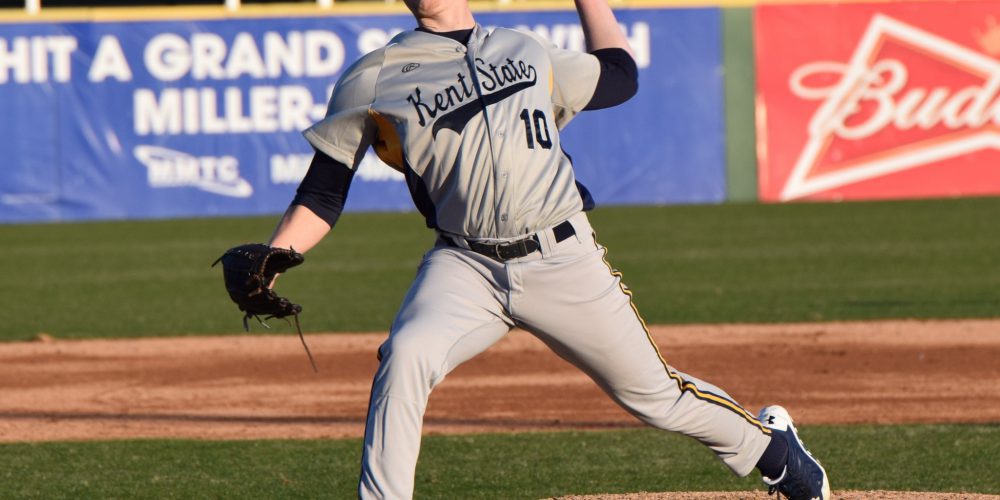 The marquee series of the weekend provided Friday’s best game, as No. 10 Miami beat No. 5 Louisville 8-4 on Willie Abreu’s walk-off grand slam. That blast lifted Hurricanes coach Jim Morris to his 1,500th career victory. It was Abreu’s second homer of the night — he finished with seven RBIs — and it came against one of college baseball’s best arms, preseason All-American flamethrower Zack Burdi. The ’Canes have been waiting for Abreu, their senior captain and one of their most talented players, to get his bat going. He got off to a slow start and has been hitting in the No. 7 hole, where he batted Friday. But Morris might have foreshadowed his big Friday with his comments a day earlier.

“He’s kind of a guy that, he’s either hot or he’s not,” Morris told me Thursday. “He hasn’t been as consistent as you’d like for him to be, but got a world of talent and is a great, great kid. He hasn’t swung it as much as we know he can. He’s got to do it.”

He sure did it Friday, in a big game against a marquee opponent. His first homer, a three-run shot in the second, came against another blue-chip prospect — Louisville’s Kyle Funkhouser, who finished with five walks, four hits, four strikeouts and three earned runs over five lackluster innings of work. A bevy of scouts were on hand for the big matchup, and most of them walked away disappointed in Funkhouser, whose fastball topped out at 93 and sat mostly at 90-91, and whose breaking ball and changeup were below-average. He needs to recapture his first-round stuff and rediscover his command in order to rebuild his fading draft stock.

Two of Friday’s best individual performances came from potential top-two-rounds prospects performing at a high level in the mid-major ranks. Our Frankie Piliere wrote Monday about the steady rise of St. Mary’s ace Corbin Burnes, and he followed up his seven strong innings against Utah last week with a masterpiece in the Gaels’ WCC opener on the road at San Diego. Burnes carried a perfect game into the eighth inning and a no-hitter into the ninth in St. Mary’s 9-0 win. He finished with a two-hit shutout, walking just one and throwing just 98 pitches. Piliere wrote about Burnes’ improving command, and he showed superb command Friday, going to three-ball counts just four times (and not for the first time until the seventh inning). He retired 18 of 27 batters with three pitchers or fewer. Gaels coach Eric Valenzuela, enjoying a memorable return to his old stomping grounds at USD, said Burnes ran his fastball up to 95 mph and mixed four pitches for strikes effectively.

Meanwhile, Kent State blue-chip lefty Eric Lauer racked up 13 strikeouts over 8 1/3 innings of three-hit, shutout ball to lead the Golden Flashes to a quality 2-0 win at Liberty. Lauer issued just one walk while tying his career high for strikeouts. He improved to 3-1, 1.36 on the season with 35 strikeouts and 12 walks in 33 innings.

It’s going to be quite a race for Southern Conference player of the year honors. Entering this weekend, Samford slugger Heath Quinn was tied for the national lead with nine home runs, while first-team preseason All-American Kyle Lewis of Mercer was two off the pace with seven. In slugging percentage, they ranked 12th (.845) and 14th (.824), respectively. Quinn went deep for the 10th time this season in Samford’s 8-5 win Friday against Jacksonville — but Lewis still managed to gain ground on him, smacking a pair of homers to lead Mercer to a 10-7 comeback win at Kennesaw State. Mercer’s second long ball was an eighth-inning grand slam that gave the Bears the lead for good. On the season, Lewis is now hitting a ridiculous .438/.549/.904 with nine homers, seven doubles and 29 RBIs, while walking (17) nearly twice as often as he’s struck out (nine). What a beast.

Quinn maintains the homer lead by one and has a slight RBI edge (31), but he’s losing to Lewis in batting (a meager .373). In case you’re wondering, these two titans go head-to-head April 1-3 at Samford.

Oklahoma State stumbled out of the gate, going 2-2 with losses to UT Arlington and Stephen F. Austin during the first weekend, then getting swept in a three-game set at North Carolina in Week Two (with all three losses coming in walk-off fashion). With a 2-5 record after two weeks, the Cowboys didn’t look like the team that ranked in the top 10 in the preseason, but they held onto their spot at the back of the Top 25, and they’re starting to show why they remained ranked. Since that 2-5 start, the Cowboys have won 10 of their last 11 games, including a 6-3 win Friday against perhaps the Big Ten front-runner, Michigan. Remey Reed worked 3.1 scoreless innings of one-hit ball to earn the win in relief for OSU, which got homers from Dustin Williams and Collin Theroux (a big three-run shot in the fourth). The Cowboys still need to iron out their pitching a bit, but they have plenty of depth on the mound, and it seems like they’re on track to carry some momentum into Big 12 play starting next week. But they still must finish the job this weekend against a good Michigan club.

Defending national champion Virginia is off to a strong start in ACC play. The Cavs improved to 4-1 in the conference by sweeping a doubleheader from Wake Forest, 4-0 and 6-4. Shutting out Wake’s high-powered offense is not an easy feat, but Virginia ace Connor Jones (7.1 IP, 6 H, 0 R, 2 BB, 9 K) continued to be a rock-solid force atop the rotation, and the UVa. bullpen protected the late lead. Lefty David Rosenberger drew the start in the nightcap and allowed four runs over five innings, but junior college transfer righty Tyler Shambora finished with 4 innings of one-hit, scoreless ball to earn the win.

Leadoff man Adam Haseley was a menace for Virginia, going a combined 3-for-9 with four runs, three doubles and two triples in the doubleheader. Haseley has always been a winning player, but his offensive production has taken a big leap forward during his sophomore year; he’s now hitting .410/.505/.692 with 10 doubles, three homers and two triples in 20 games.

All-American Will Craig remained sidelined after straining his oblique last weekend, and Wake Forest needs him back fast if it is to avoid falling into a deep ACC hole. The Deacs fell to 12-9 overall and 1-4 in ACC play on Friday.

It was a wild day around the country as several leagues kicked off conference play. The Pac-12 was one of them, and the Ducks were supposed to get the weekend started on a positive note with Utah heading to the Pacific Northwest.

Well, apparently someone forgot to give that memo to Utah righthander Jayson Rose. The Ducks struggled on the mound and at the plate last weekend weekend against Mississippi State, and the offense once again scuffled on Friday night in a 4-1 loss to the Utes. Utah’s Rose struck out nine and allowed just three hits in 6.2 innings of work. Meanwhile, the Ducks’ offense spoiled a solid start from lefty Cole Irvin, who allowed just two runs in seven innings.

Overall, something needs to be done about the Oregon offense, which has struggle the past few weeks. The Ducks are now hitting an atrocious .200 as a team with only Tim Susnara hitting over .300 with a .311 average, three doubles and an RBI.

Oregon is sliding and needs to find a way out sooner rather than later.

We had coverage from the Music City on Friday with Mississippi State junior righthander Dakota Hudson tossing an absolute gem in a win over Vanderbilt, but there was plenty of other intriguing action around the league with some hard-fought contests.

In Gainesville, Fla., Missouri tied top-ranked Florida 3-3 in the top of the ninth inning, but the Gators responded in the bottom of the 10th inning with a walk-off RBI single from Peter Alonso to win 4-3. UF righthander Logan Shore struck out 10 and allowed just two runs in 5.1 innings.

In Knoxville, Tenn., a banged up Tennessee team got a walk-off RBI single from Derek Lance to knock off red-hot Ole Miss 3-2, while Zach Warren led the charge on the mound, striking out eight, walking three and allowing a run on four hits in 6.1 innings.

Lastly, while Aaron Fitt wrote on Robert Tyler and Georgia, South Carolina bested Arkansas 10-6 in a game that saw the Razorbacks make a fierce late-inning comeback. Gamecocks righthander Clarke Schmidt struck out a career-high 11 in seven innings of work.

One of the more intriguing series on the national stage this weekend is Arizona State at Oregon State. While the Beavers clearly are one of the nation’s elite, the Sun Devils, because of the personnel losses from last season, have been one of the pleasant surprises with a 13-3 record entering Friday’s contest.

The Bears might just be ready to emulate last season’s success, a campaign that ended with a trip to the Fayetteville Super Regional. Though the Bears lost some key cogs from last year’s club, including a pair of weekend starting pitchers, they haven’t skipped a beat with a 15-2 win this spring, including a 4-1 win over scuffling Iowa at home.

Missouri State starting pitcher Jordan Knutson struck out six, didn’t walk anyone and allowed a run on six hits in 5.2 innings. Meanwhile, the two-headed monster of Sam Perez and Bryan Young shined out of the pen, while Bears third baseman Jake Burger was talked three times.

How crazy of a season is Burger having thus far? He’s hitting a ridiculous .457 with nine homers and 23 RBIs, along with a .553 on-base percentage and .886 slugging percentage.

The Bears are quickly ascending our hierarchy of teams.

5. Beer And Much More At Clemson

Boston College earned plenty of fanfare last weekend for not only earning an impressive series win over NC State, but also improving to 12-3 overall before Friday night’s contests at Clemson.

Tigers veteran righthander Clate Schmidt put together a banner performance in a 6-2 victory of the Eagles. Schmidt struck out 11 (same as his brother at South Carolina) and allowed two runs on six hits in seven innings, while it was once again the Seth Beer show for the Clemson offense. Beer hit his eighth homer of the season, while also recording a double to help lead the charge.

As for the Eagles, usually consistent starting pitcher Mike King had a rough start against the Tigers, allowing six runs on eight hits in five innings, while the Tigers improved to 14-3 and just continue to amaze us with their sheer consistency.