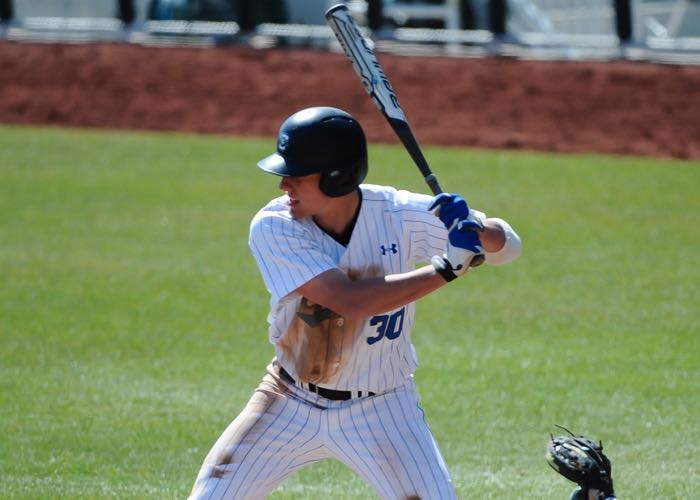 Player of the Year: Reagan Fowler, 1b, Creighton

• St. John’s is pretty well set up to take back a conference title it lost by one game last year. The most important thing in baseball is getting on base, and St. John’s does that as well as anyone in the league—last year, 10 Red Storm players got 100 or more plate appearances, and seven of those had an OBP of .400 or higher. Six of those seven players return, plus senior 1B Matt Harris, who hit .290/.384/.440 and led the team in home runs. In SS Jared Mederos, the Red Storm has a senior cleanup hitter at a crucial defensive position who hit .362/.403/.475 last year. 3B Robbie Knightes slapped-and-ran his way to the Big East batting title and a .399 average as a freshman. Freshman Jesse Berardi, a 40th-round pick of the Phillies, will join them at second base.

If there’s one complaint about this offense, it’s that it’s a little down on power, but the Johnnies can win stringing together singles and walks for two reasons: 1) They string together a lot of singles and walks. 2) Their pitching staff is such that they won’t need to score much to win. Friday night starter Ryan McCormick sits 88-92 with his fastball and is maturing into a potential three-pitch workhorse in his draft year. He’s the only holdover from a rotation that lost James Lomangino to the Rockies in the draft, but 6-foot-4, 225-pound junior Joey Christopher will move up from the bullpen and Cody Stashak is an intriguing prospect from junior college. Those three, plus freshman LHP Kevin Magee, will try to get the ball to junior submariner Thomas Hackmier and senior closer Joe Kuzia, who posted a 0.97 ERA and led the league in saves in 2014. By the time St. John’s gets to conference play, it will already have been battle-tested against Georgia Tech, East Carolina, North Carolina, Kennesaw State, Oregon and Liberty. Nobody’s unbeatable, but St. John’s is without an obvious weakness.

• It’s been a good news/bad news offseason for Seton Hall, which lost Big East Pitcher of the Year Josh Prevost to the draft, but returns co-conference player of the year D.J. Ruhlman and first baseman and cleanup hitter Sal Annunziata, whose .330/.393/.503 line will make you learn to spell his name if you haven’t already. Prevost was the only major loss for the Pirates, who can go four deep with veterans in the starting rotation, plus sophomore closer Joe Dibenedetto, a diminutive lefty who’s a favorite of the coaching staff. It’s really difficult to overstate how many problems a player like Ruhlman solves—a shortstop who’s also a good baserunner and reliable middle-of-the-order tentpole is a tremendous luxury, and he’ll be one of the favorites for conference player of the year again. He’s also part of a potent Seton Hall running game—the Pirates stole almost four times as many bases as their opponents last year, led by returning leadoff man Derek Jenkins, a 5-foot-8 spark plug who went 38-for-49.

• The third Big East title contender is Creighton, the reigning regular-season conference champion. The Blue Jays suffered dearly in losses to the draft and graduation compared to their conference rivals, losing closer Bryan Sova and two-way star Jake Peter, which, despite an influx of juco transfers, might torpedo a repeat bid. The most interesting arrivals are the Rogalla brothers, freshman Keith and senior transfer Jack, both righthanded starting pitchers who can throw 90 and work off the fastball with multiple offspeed pitches. They’ll join returning ace Matt Warren, a 6-foot, 190-pound righty who pounds the strike zone with the kind of success you’ll have when you play in front of a top defensive team in one of the most pitcher-friendly ballparks in the game, TD Ameritrade Park in Omaha.

The headliner for Creighton, however, is Reagan Fowler, who was the co-Big East Player of the Year as a redshirt sophomore, which is not the kind of thing you see often from a first baseman who didn’t hit a home run all season. The lack of home runs shouldn’t dissuade you of Fowler’s power for a few reasons: 1) He’s a big, physical hitter at 6-foot-2, 205 pounds. 2) He slugged .481 with 19 extra-base hits anyway. 3) The robots from Pacific Rim couldn’t hit a ball out to center at TDAP either. He’ll headline a position player group that is very disciplined on both sides of the ball and should challenge for a spot in the NCAA tournament if everything goes right.

• One of the shocks of last season was the fourth-place Musketeers of Xavier, a seemingly unremarkable .500 team, losing the conference tournament opener, then beating each of the three teams that finished ahead of them to bag the Big East’s only regional bid. Once there, Xavier took an 11-0 keelhauling from eventual champion Vanderbilt before upsetting Clemson and nearly doing the same to Oregon. As is fitting for a team that showed up to last year’s postseason like the crazy neighbor in a 1990s sitcom, nobody enters the Big East season with greater variability than Xavier. The Musketeers’ ability to shock the conference again depends mostly on the health of two senior pitchers: starter Adam Hall and closer Jacob Bodner. Hall is a prototypical ace: 6-foot-6, 215 pounds, possessed of a low-90s fastball that he throws downhill. Last year, however, he hadn’t fully recovered from Tommy John surgery and as he tired through the season, he posted some undignified stats. Bodner missed all of 2014 due to injury, but if both are back to their peaks, Hall in particular, they’ll elevate Xavier’s pitching staff from pedestrian to one of the best in the conference.

• Butler finished fifth in the conference last year and lost its best position player (Marcos Calderon) and best pitcher (lefty Eric Stout), so there’s not cause for an enormous amount of optimism for the Bulldogs. Coach Steve Farley has filled out his roster with some intriguing newcomers. Freshman SS Garrett Christman turned down the San Francisco Giants to come to Butler, and juco transfers Chris Myjak and Nick Morton figure to fill out the weekend rotation behind sophomore lefty Jeff Schank. Christman and fellow freshmen Tyler Houston and Gehrig Parker (who overcame the overwhelming pressure that must come with being a ballplayer named “Gehrig”) could make up the foundation of a contender in the future, but we probably won’t know until, you know, the future.

• Villanova tied for last in the conference in 2014, and could very well do so again this year. The lineup includes 1B Max Beerman (.304/.423/.492 in 2014), 2B Todd Czinege (.306/.353/.434) and not a ton else to feel good about. The rotation is somewhat more intriguing: Josh Harris and Hunter Schryver could both get some draft interest as pitchability lefties and No. 3 starter Max Almonte is a physical righty who can hit 95 mph with his fastball and offset it with a playable curveball. Almonte hasn’t been able to translate that into results or even missed bats (25 K, 24 BB in 58 1/3 IP in 2014), but his stuff could make him a late-round, low-risk draft prospect if he performs as a senior.

• Georgetown returns its top position player (all-conference C Nick Collins) and three of its top pitchers (Matt Smith, Matt Hollenbeck and David Ellingson) from last year’s team, which would be of more comfort if the Hoyas hadn’t gone 5-13 in-conference and had to hear about the 1985 Final Four every time they played Villanova. Joking aside, Collins is a masher, a physical 6-foot-2, 213-pound lefty hitter who hit .351/.418/.429 as a sophomore, and senior infielder Ryan Busch (.317/.400/.425) will be on base to be driven in relatively frequently. They’re surrounded largely by position players who will struggle to get on base and pitchers who will struggle to get outs. Georgetown students should spend more time thinking about the fantastic education they’re getting and less time thinking about the quality of their baseball team..