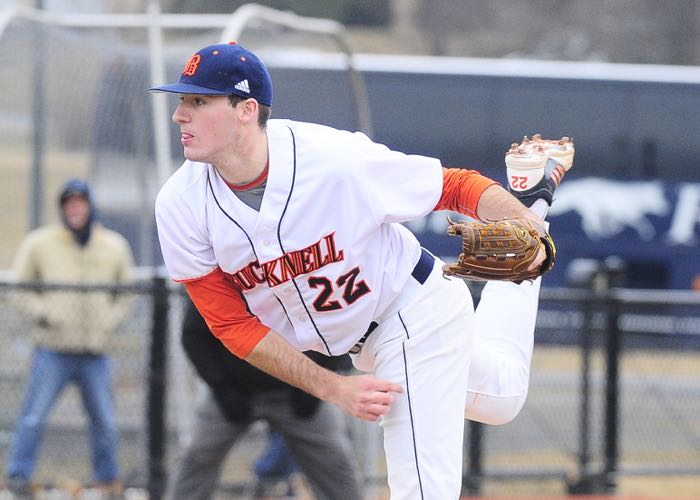 Pitcher of the Year: Robert Currie, of, Navy

Freshman of the Year: Drew Aherne, of, Lafayette

• History has shown us that if you give Paul Kostocopoulos an experienced pitching staff, Navy will be in contention. He’ll have a real stud in staff ace LHP Anthony Parenti (8-3, 1.52, 5 CG), a fierce competitor who locates his 86-89 heater to both sides of the plate effectively. Fellow weekend starters Stephen Moore (3-5, 2.49) and Luke Gillingham (2-6, 3.33) will be joined by saves ace Andrew Bartek (2-0, 2.48, 3 saves) to form a very solid core. All-America candidate Robert Currie (.359/.431/.462, 26 SBs) is one of the most exciting players in the country, a center fielder with plenty of speed and surprising pop to the gaps. Also watch for incoming transfer 3B Sean Trent, who started his career at Florida before enlisting in Annapolis.

• Lehigh will be getting an all-new Goodman Campus Baseball Field to play in this year, including a new synthetic turf infield, new dugouts, new netting system and grandstands. The Mountain Hawks will have a lot of talent back to grace the new digs. The coaching staff raves about Friday guy Kevin Long (3-2, 3.21), reliever Brandon Kulp (0-1, 9.00, but with a fastball that sits 89-92 and can touch 93-94) and the return of J.R. Edwards, who is 6-3, 4.31 in his career but had to miss 2014 with Tommy John surgery. Long, the staff ace, sits at 88-91 mph and mixes in a quality slider, though his command is still a work in progress. Seven starters are back in the lineup, led by OF Justin Pacchioli (.362, 16 SBs) and 2B Mike Garzillo (.308, 10 SBs). That duo brings electrifying speed: Pacchioli ran a 6.28-second 60-yard dash on scout day in the fall, and Garzillo ran a 6.36.

• Think about this: Holy Cross finished in last place in the Patriot League, yet the Crusaders also won two games at Mississippi State during the opening weekend. Wow. Three weekend starters are back on the mound and seven starters are back in the field, so there is a good nucleus of players back to improve on their 13-31 season of a year ago. CF Evan Ocello hit .329 with 24 stolen bases and will be a great table setter for the Crusaders. RHP Ben White (0-5, 3.18) held opposing batters to a .225 average, but Donny Murray (2-6, 6.55) will be the Friday starter.

• Lafayette had a lot of shortcomings last year. The biggest sore thumb was that boney-armed .239 team batting average. DH Alex Woinski (.326), is the only returning hitter who hit better than .267. The pitching staff has five sub-5.00 ERA flingers back to the rubber, led by weekend starters Mitch Leeds (2-4, 3.90) and David Bednar (1-4, 4.15), along with spot starter Trevor Houck (1-2, 2.48, .174 OBA). Four of the five infielders return, but that .943 fielding percentage (294th out of 300 Division I teams) is tough to overlook. Look for immediate input from newbies Drew Aherne, who should take over in center field, and 6-foot-10 LHP John Cain, who turned down some draft overtures to come to campus and be a Leopard..