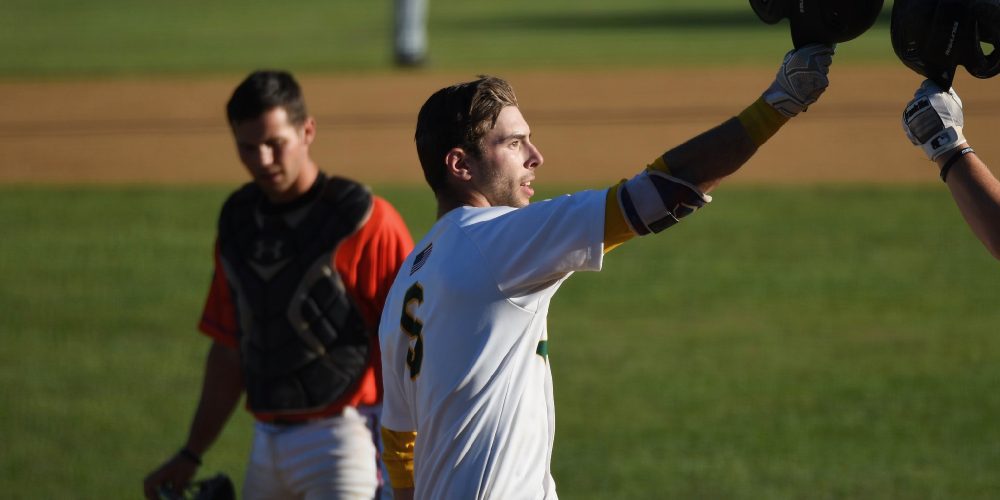 NORTH ADAMS, Mass. — Colby Maiola has managed to fly a bit under the radar thus far in his baseball career, but everywhere he goes, he hits. And now, scouts are taking notice — especially after the UMass Lowell outfielder’s strong showing at Sunday’s New England Collegiate Baseball League all-star game, where he earned MVP honors.

Maiola was a three-sport athlete at North Reading (Mass.) High who spent his first two college baseball seasons at Northern Essex (Mass.) CC, which competes in NJCAA Division III. He dominated at that level, leading the nation with a .932 slugging percentage as a sophomore to earn national NJCAA DIII Player of the Year honors from the ABCA. Then he transferred to UMass Lowell for his junior year this spring and thrived, hitting .331/.406/.521 with six homers and 14 stolen bases. Playing alongside 14th-round pick Chris Sharpe in the River Hawks’ outfield, Maiola got some exposure in front of scouts but still went undrafted.

So Maiola just kept plugging along. He headed to Sanford in the NECBL and hit .273 with 10 homers in 30 games. And by the time the end-of-season all-star game arrived, a number of Northeast area scouts were intrigued by him — I heard scouts discussing him with interest during batting practice Sunday, even before his 3-for-3 showing in the game. He’s got some lefthanded pop in his athletic 6-foot-3, 195-pound frame, and he showed off that strength in his first at-bat, when he hit a 90 mph Benjamin White fastball out of the park to center field for a two-run homer.

“In that at-bat, I was just trying not to do too much. I got ahead of a changeup the first pitch, so I just wanted to make sure I stayed back, got my barrel through,” Maiola said. “He gave me a pitch that I didn’t miss, and I got my barrel to it. I just made the most of that pitch.”

Maiola came up twice more and continued making hard contact in both of those at-bats. He was aggressive early in the count, barreling up an 88 mph fastball for a liner single to center in the third, then pulling another line-drive single down the right-field line in the fifth. He said he’s not normally a pull-oriented hitter, and he views himself as more of a table-setter who works counts. But in the all-star setting, he jumped on good pitches to hit in the zone when he saw them.

“I’m more of a gap-to-gap guy wherever I am in the order. I was lucky enough today to where I got it elevated and it got out, but I’m usually more gap-to-gap,” Maiola said. “I’m usually more of an opposite-field hitter, that’s just the way my swing’s always been. So in the table setter role, I feel like I do well. I have a little bit of speed that, if I can get on base, then I can hopefully steal a base or two and put myself in scoring position for someone else.”

Maiola, who has played center and left field this summer, showed above-average speed in the 60-yard dash, running it in 6.70 seconds, and he showed an average arm during pregame infield/outfield. And once the game began, he took full advantage of his opportunity to raise his profile in front of a strong collection of scouts.

“It was incredible. I mean, it wasn’t really nerves or butterflies, but whatever feeling it was before the first at-bat, getting my name called — it was a great feeling,” he said. “I talked to my mom before the game and she asked me if I was nervous, and I was like, ‘It’s just another game.’ But then getting out here, everything kind of changed once the lights go on … It hasn’t really sunk in yet. Really great feeling, honestly. I just tried to play as relaxed as I could in a situation like this, and it really just worked out, everything kind of went my way, so couldn’t have asked for a better day.”

• It’s been a whirlwind year for Niko Hulsizer (Morehead State). First he made the jump from freshman standout in 2016 to bona fide force of nature in 2017, hitting .349/.435/1.210 with 27 home runs, ranking second in Division I in homers, slugging, RBIs (82) and total bases (193). Then he won the nationally televised College Home Run Derby at TD Ameritrade Park Omaha, gaining him some additional fame when he returned to the NECBL — I overheard several other all-stars talking about watching him on TV in Omaha as Hulsizer participated in Sunday’s NECBL home run derby. Hulsizer wasn’t able to pick up another home run derby trophy, as he mustered just six long balls in his three-minute session Sunday. But that came after he participated in the “fastest runner in the NECBL” contest, where he ran a 6.57-second 60-yard dash to earn a spot in the finals. After running a pair of 60s, he said he was a little tired for the home run derby.