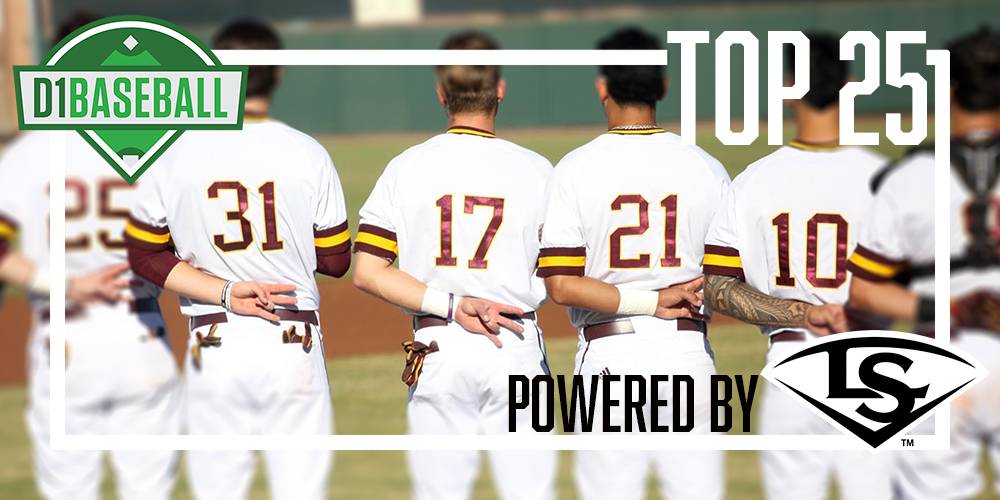 Arizona State remained undefeated and returned to the D1Baseball Top 25

For the fourth straight week, Vanderbilt remained No. 1 in the D1Baseball Top 25 rankings, powered by Louisville Slugger. The Commodores posted a 4-1 week to improve to 13-3 overall. UCLA held on to the No. 2 spot after a 2-1 showing at the Dodgertown Classic, with wins over Oklahoma State and crosstown rival Southern California.

North Carolina plunged 12 spots from No. 3 to No. 15 after getting swept on the road by Clemson in its ACC-opening series. The Tigers returned to the rankings after a one-week absence, checking in at No. 24.

The other new team in the rankings is Arizona State, which went 4-0 on the week to improve to 15-0 overall. One of two unbeaten teams left in Division 1, the Sun Devils make their season debut in the rankings at No. 25. The other undefeated team is 15-0 NC State, which opened ACC play with a sweep of Pittsburgh and climbed two spots to No. 20.

The top-ranked Commodores are followed in the rankings by three Pac-12 powers: UCLA, No. 3 Oregon State, which went 2-0-1 at the Seattle Baseball Showcase; and No. 4 Stanford, which took three of four from No. 12 Texas and climbed two spots in the rankings. Mississippi State, Louisville, Georgia, Ole Miss and Florida State each moved up one spot to round out the top 10.

Texas Tech rebounded from a bad weekend at the Frisco Classic with a 5-0 showing this week and jumped three spots to No. 11. Texas remained at No. 12 despite a 2-3 week, one spot ahead of No. 13 LSU, which rebounded from its sweep at Texas last week with a series win over Cal.

The back half of the rankings saw little movement, aside from the two teams that fell out of the Top 25: Michigan, which went 1-3 in its West Coast swing and tumbled from No. 16 all the way out, and Baylor, which posted its second straight losing weekend and fell out from No. 21.