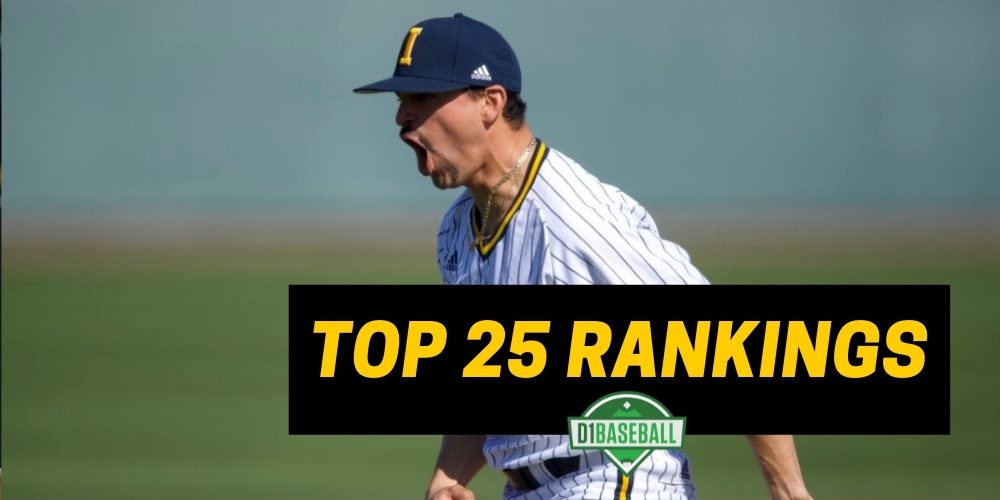 Arkansas remains No. 1 in the D1Baseball Top 25 for the fifth week in a row after taking two of three from Georgia to remain unbeaten in weekend series this year. Vanderbilt held steady at No. 2, while Mississippi State and Tennessee moved up one spot apiece to give the SEC each of the top four spots in the rankings.

The Big 12 occupies the next three spots. Texas moved up one place to No. 5 after winning a huge road series at TCU, which fell from No. 3 to No. 6. Texas Tech, which has won series against both the Longhorns and Frogs but remains in third place in the standings, checks in at No. 7.

ACC leader Notre Dame dropped one spot to No. 8 after losing its first series of the year, at home to Florida State. The Seminoles climbed just one spot to No. 17, blocked by a logjam in the teens and stuck behind No. 15 Louisville and No. 16 Pitt — both of whom won series against the Seminoles and remain ahead of them in the standings.

The Pac-12 race is tightly bunched at the top, and the league’s top three teams are also close together in the rankings. Oregon moved up one spot to No. 10 after sweeping Washington, and Stanford jumped four spots to No. 12 after winning a big series against Arizona, which slid four spots to No. 13. UCLA also moved up this week, climbing two spots to No. 23.

One week after sliding out of the rankings, UC Irvine returned this week at No. 24 after winning three of four on the road at UC Santa Barbara. The Anteaters improved to 21-7 in the Big West, two games ahead of the Gauchos. Old Dominion fell out of the Top 25 after splitting a four-game series against UTSA.

D1Baseball editors and national writers determine the Top 25 rankings. Records are through games of May 9.