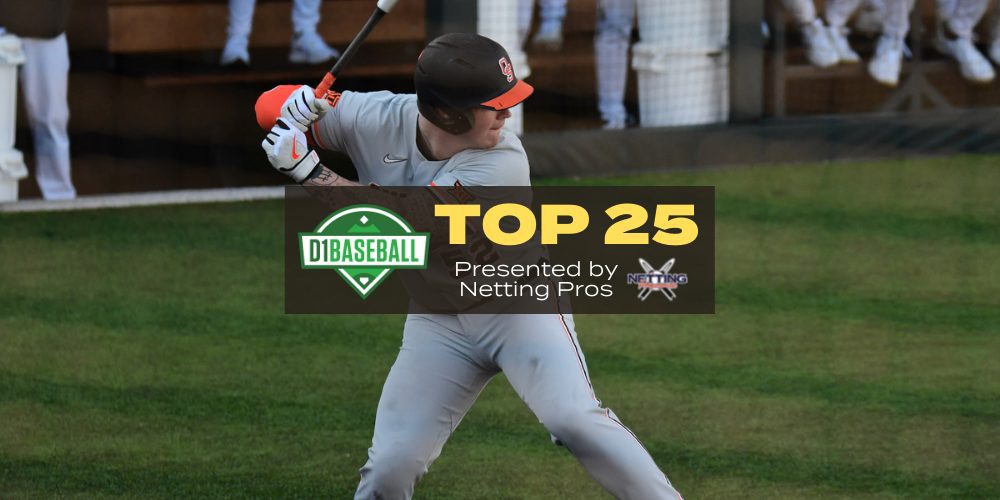 Top-ranked Texas outscored Rice 36-3 in a dominating three-game sweep to remain No. 1 team in the latest D1Baseball Top 25 Rankings.

While the Longhorns remain at the top, there was some movement in the top 10. Oklahoma State vaulted from No. 7 to No. 4 following a road series win against Vanderbilt in thrilling fashion. The Commodores dropped two spots to No. 5 following the tight series loss. Mississippi State fell from No. 4 to No. 7 after losing a home series to previously No. 24 Long Beach State, while Florida State joined the top 10 following an impressive weekend against James Madison, particularly on the mound.

Arizona is knocking on the door to the top 10 after a 3-0 showing at the State Farm College Showdown over the weekend. Long Beach State, which took two of three from the reigning champs, made the biggest jump this week, going from No. 24 to No. 12. Another West Coast program, Oregon State, moved from No. 18 to No. 14 following a loud offensive onslaught during a 4-0 week in Arizona. Texas Tech dropped six spots to No. 20 after a 1-2 weekend at Globe Life with losses to Arizona and Auburn.

Two new teams entered our rankings this week at Nos. 21 and 22, respectively. Liberty moved in at No. 21 following a road series win at Florida, which fell six spots to No. 15. Maryland moves in at No. 22 after sweeping Big 12 contender Baylor on the road.

The SEC leads all conferences with eight teams in our rankings, while the ACC is next with six teams in the rankings. The Big 12 has four representatives in the rankings, the Pac 12 has three and the American, Big Ten, Big West and ASUN each have one team in the Top 25.