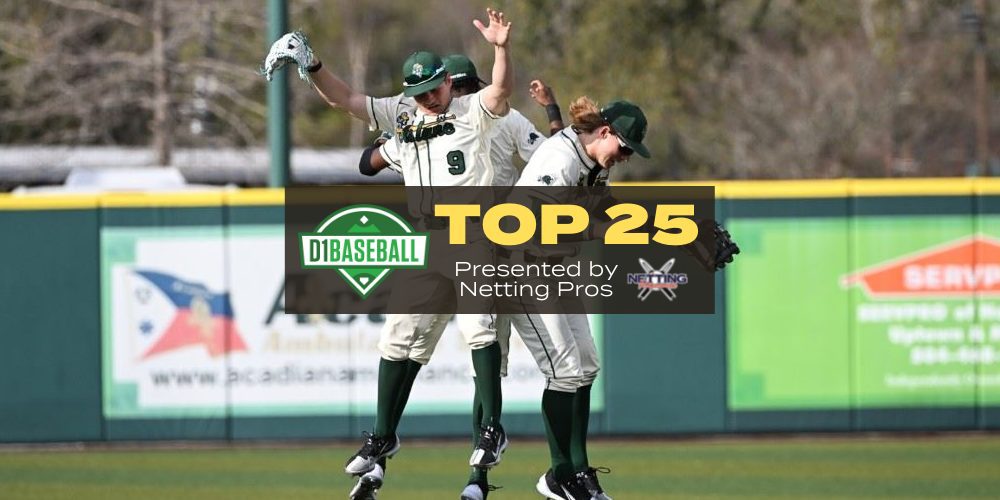 Texas remains No. 1 in the D1Baseball Top 25 rankings after going 2-1 at the Shriners College Classic, with a pair of wins over ranked SEC powers Tennessee and LSU. The preseason No. 1 Longhorns took their first loss of the season Sunday against UCLA, but they are sitting pretty at 11-1 overall with five wins against the SEC, counting a sweep of Alabama last week.

Ole Miss and Arkansas held steady at Nos. 2 and 3 after winning series at UCF and vs. Southeastern Louisiana, respectively. Fellow SEC power Vanderbilt climbed to No. 4 after a 5-0 week that included a road sweep of Hawaii, and Stanford moved up one spot after bouncing back from two consecutive losses to win its series against Cal State Northridge.

The rest of the rankings saw plenty of volatility. Oklahoma State slipped two spots to No. 6 after dropping the first two games of its home series against Gonzaga, although a pair of midweek road wins at Arizona State mitigated the damage to OSU’s resumé. Oregon State vaulted six spots to No. 7 after taking two of three from preseason Top 25 foe UC Irvine. ACC contenders Florida State and Notre Dame climbed two spots apiece to 8 and 9, and Tennessee made one of the week’s biggest jumps, up seven spots to No. 10 on the heels of a 2-1 showing at Shriners.

Other climbers include Florida (up three places to No. 11 after winning a road series against Miami, knocking the Hurricanes out of the Top 25); Georgia Tech (up five to No. 13 after taking two of three from rival Georgia); Liberty (up six to No. 14 after a 4-0 week); and North Carolina (up nine to No. 15 after a 5-0 week capped by a sweep of Coastal Carolina).

Three teams entered the rankings, replacing Miami, Sacramento State and Long Beach State, all of whom lost their weekends. Tulane leapt into the rankings at No. 18 after taking two of three from Mississippi State, one week after winning a tough road series at Louisiana Tech. Clemson jumped in at No. 19 on the heels of its first sweep of rival South Carolina since 1999, keeping the Tigers unbeaten on the season. And aforementioned Gonzaga entered at No. 25 after clinching the road series in Stillwater, with the series finale postponed until Monday.

D1Baseball editors and national writers determine the Top 25 rankings. Records are through March 6.