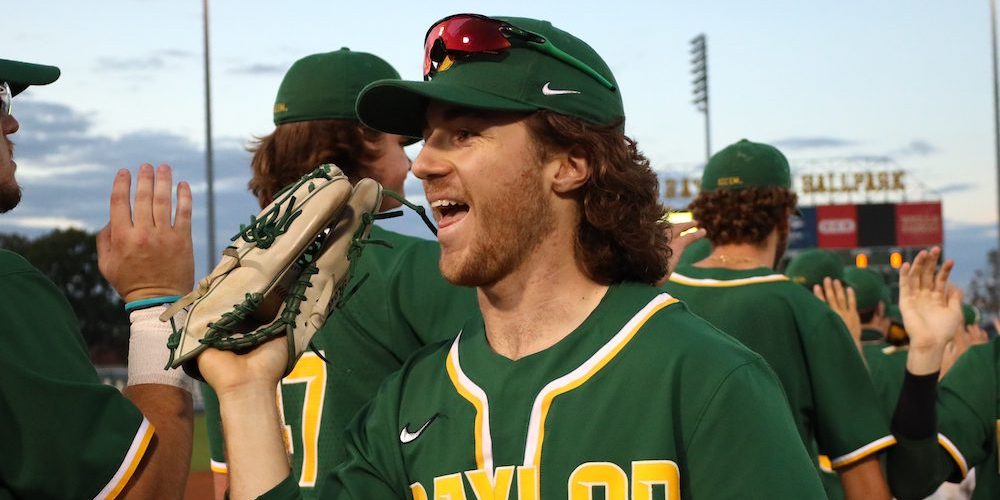 Nolan Rodriguez was just a few weeks old when his family snapped his first photos at a baseball field.

After that, given that his father is Baylor coach Steve Rodriguez, there have been hundreds of other photos on ball fields.

Rodriguez, a 20-year-old Baylor outfielder, gave up fall baseball this year to pursue a major opportunity in Washington D.C., where he is working an internship for the Religious Freedom Institute.

Among other things, Rodriguez does research for RFI, a non-profit organization that strives to advance religious freedom around the world.

Rodriguez is one of 20 students from his campus participating in a program called: Baylor in Washington. He gets six hours of school credit for his internship, three hours for a once-a-week public-policy course and three hours for a research paper he is writing.

He lives with the other 19 Baylor students, who are all having different experiences.

“We’re interning all around the city – on Capitol Hill and for different government agencies, think tanks and non-profits,” said Rodriguez, who started at RFI on August 19 and will be there until Dec. 12. “One thing that has become clear is how much need there is in the world.

“It’s humbling to be here. Everyone in this city, their job is to fill a need, whether it’s someone on Capitol Hill writing legislation or someone in the State Department who is dealing with U.S. interactions diplomatically around the world. There are so many different voices that need to be heard when it comes to making these decisions.

“Everyone is so passionate, fighting for what they believe. There’s so much to tackle, and it feels like the problems never stop.”

Still, Rodriguez said he will come away from D.C. with a positive image of the people who work on Capitol Hill.

“There’s a difference between the way they are portrayed in the media and the reality,” Rodriguez said. “People here have a genuine desire to do good. Where you see differences in political leanings, it’s just because they are balancing different (good intentions). That’s what makes this city so great, even though it can a bit messy sometimes.”

Rodriguez was recommended for the program by David D. Corey, a professor of political science in the Baylor University honors program.

Corey said that one of the best things about Rodriguez is that he didn’t know he was a baseball player initially. Rodriguez didn’t act in an entitled manner, which is refreshing.

“He was a thoughtful, front-row student – really engaged,” said Corey, who is also the director of the Baylor in Washington program.

“It was fun finding out he was a baseball player. That just made me even more impressed with him, knowing how much work you have to put in to play your sport.”

Corey said Rodriguez has a deep interest in politics.

“Nolan is worried about our country,” Corey said. “He sees the polarization.

“But he’s also sensible and moderate. He doesn’t have an ideological axe to grind.”

Rodriguez, who has a 3.5 grade-point average, earned first-team academic All-Big 12 Conference honors in 2021. He is working toward a double major in philosophy and in political science.

He first met Corey while taking one of his classes, War and Morality.

“I took his class the spring of my freshman year,” Rodriguez said. “(Corey) presented my Christian faith in a very applicable way.

“Things that I thought of as unholy before … I had thought of war as good for nothing. I was really struggling (to understand) … How could a Christian justify being violent?

“(Corey) walked us through that. He brought us the Augustinian perspective. ‘No Christian should look to do harm. But if it is presented, you should protect yourself with a benevolent harshness. You should hate to have to do this, but it is necessary nonetheless.’

“That made so much sense.”

Rodriguez has gone on to take a total of five of Corey’s courses. Corey said he could see Rodriguez – once he is graduated from Baylor — landing an important job in D.C.

In the meantime, Rodriguez hasn’t forgotten about baseball. He has a daily 5 a.m. wakeup call and is at Equinox gym by 6 for weight training.

After work at the RFI, he takes the metro to the Primetime Baseball facility, where he hits the batting cage and does some throwing.

At Baylor, Rodriguez’s role has been as a reserve corner outfielder and pinch-runner. A walk-on player, Rodriguez got into 11 games last season, scoring four runs. He got just four at-bats, but he earned a bit of glory by smashing a triple.

“My son is realistic,” Steve Rodriguez said. “Is pro baseball in his future? Who knows? But we know what will be in his future, and that is what he’s doing right now.”

Whether it’s his son or any other player he has coached, Steve Rodriguez said he delights in seeing what these young men accomplish off the field.

“Even though we’re playing D1 baseball at a high level, 99 percent of these guys are going to need another job outside of playing,” Steve Rodriguez said.

“The great part for me is that I get to play a role in these kids’ lives as they try to figure out who they are and what they want to do. They have to find their passion.”

Nolan’s passion appears to be in politics, policymaking and preserving religious freedom.

“That last thing I want to do is to squash that,” Steve Rodriguez said. “When he got the call about RFI, we had a long talk, and we brought other people into the conversation.

“The consensus is that people told Nolan: ‘I don’t know how you can pass this up. It’s a great opportunity.’”

“I will no longer be dealing with the bigger problems of the world, but there are needs to be met everywhere,” he said. “I know that the humility I have gained from understanding the problems that people have around the globe has altered the way I will interact in my community.”