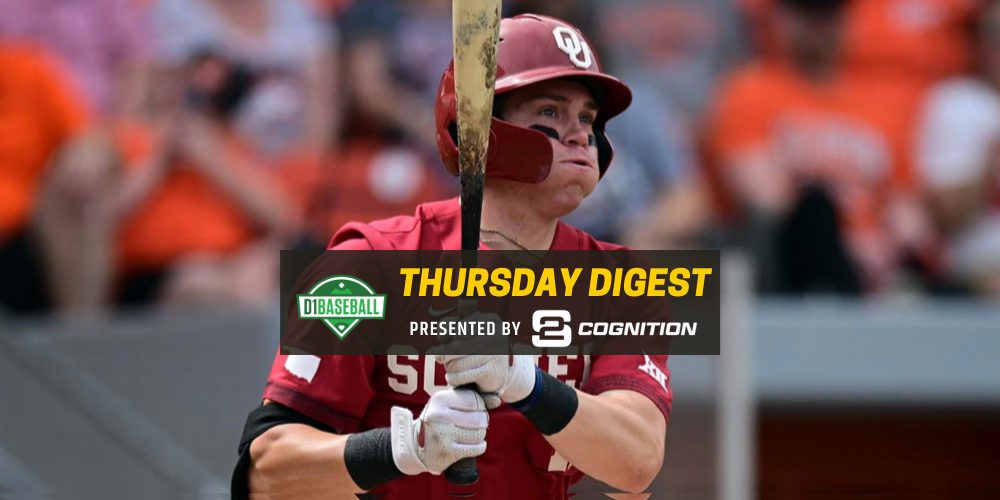 DID YOU SEE THAT?

• Georgetown continues to be one of the best stories in college baseball this season, beating red-hot UCONN 13-2 to notch its 30th win this spring. Georgetown has set the single season wins record in program history, a mark previously owned by the 1986 club. Edwin Thompson and his coaching staff continue to do a terrific job. Ethan Stern had two homers for the Hoyas, while on the mound, Carter Bosch struck out seven and allowed just a run on five hits in six innings. Reliever Angelo Tonas tossed three shutout innings out of the pen.

• Tennessee took no prisoners Thursday night on the road in Starkville, as it roughed up the defending national champs to the tune of 27-2. Luc Lipcius and Jorel Ortega each hit two homers for the Volunteers, with Ortega having a historic eight-RBI performance. Evan Russell recorded three doubles and Trey Lipscomb chipped in a four-hit performance. Furthermore, UT righthanded pitcher Chase Dollander was lifted after throwing six no-hit innings. While it was a big night for the Vols, MSU moved into last place in the SEC standings.

• Miami continued its impressive ways with a 6-4 win over Notre Dame. Miami lefthanded pitcher Carson Palmquist put together yet another strong start, striking out eight and allowing a run and a hit in five innings, while Gaby Gutierrez led the Hurricanes offense with a huge three-run home run.

• LSU took a step back in the hosting discussion last weekend with an 0-3 record against Ole Miss, but the Tigers asserted themselves against Vanderbilt in a 13-2 win. LSU’s Dylan Crews had a huge night at the plate, going 4-for-4 with a home run, double, two walks and four RBIs, while Jordan Thompson had two hits and Cade Doughty broke out in a big way with a pair of homers. LSU is up to 30 in the RPI with the win.

• Texas A&M and Arkansas continue to be co-leaders in the SEC after both taking care of business on the road. A&M took down red-hot Ole Miss, 10-5, in Oxford with Dylan Rock hitting two homers and Jack Moss adding a home run, while Arkansas defeated Alabama 7-3 with Cayden Wallace and Peyton Stovall each hitting massive home runs. The Hogs’ bullpen was lights out, too, with Evan Taylor tossing two shutout frames. A&M sits at 16 in the RPI after Thursday, while the Hogs are at 28.

• Stanford righthanded pitcher Alex Williams continues to absolutely deal. He did the same in a 7-1 home win over USC. Williams struck out four, walked one and allowed a run on four hits in a complete game performance. What a season the talented righty is having for Esky’s club.

• Oregon and Arizona continue to jockey for position in the Pac-12, and the Ducks captured a 10-4 win to move up to 22 in the RPI. UO’s Tanner Smith had a massive day at the plate, hitting two homers and knocking in four runs, while Anthony Hall also hit a home run for the Ducks.

• Did anyone see the absolute ridiculousness in the Iowa-Indiana game? Indiana jumped out to a 13-4 lead over the Hawkeyes on the road before Rick Heller’s club exploded for 10 runs in the fourth and went buck wild offensively with multiple runs in each of their final four innings to win 30-16. Our Patrick Ebert will have much more on this game, but Iowa’s Kyle Huckstorf had an insane night with three homers, six hits and 12 RBIs. Iowa’s RPI creeped up a few spots to 63.

• Saint Joseph’s righthanded pitcher Ian McCole threw a no-hitter in an 18-0 win over St. Bonaventure. McCole struck out six and walked just one in the complete game performance.

• Louisville righthanded pitcher Jared Poland put together yet another strong start in a 4-1 win over Virginia. Poland struck out eight, walked one and allowed a run on two hits in seven innings in the win. Meanwhile, Dalton Rushing and Jack Payton led the offense with two hits each.

• Oklahoma smacked six homers in a 13-8 road win over Texas Tech. OU’s Brett Squires had a huge night at the plate with a home run, two hits and three RBIs, while Kendall Pettis, John Spikerman and Peyton Graham each knocked in two runs. OU’s RPI inched up a couple of spots to 33. Also, the Sooners are just two wins away from a shared Big 12 crown with TCU.

• Oklahoma State slipped as a Top 16 host last weekend after getting swept at home by Texas Tech, and the Pokes further slipped in the RPI to 20 after getting walked off by Antonio Valdez and Baylor, 13-11. OSU righthanded pitcher Victor Mederos made his return to the mound and allowed three runs and three hits in six innings, but the OSU bullpen scuffled.

• The ACC bubble teams all took care of business for the most part. Clemson crushed Boston College at home, Georgia Tech edged Pittsburgh on the road, North Carolina got a walk-off from Alberto Osuna and Wake Forest’s Rhett Lowder was terrific on the mound with six strikeouts and just two runs allowed on five hits in a complete game performance.

• Southern Miss clinched the Conference USA regular season title with a 9-4 road triumph over red-hot Middle Tennessee The Golden Eagles got a big-time performance from Slade Wilks, who hit a home run and knocked in three runs, while leadoff hitter Gabe Montenegro had two hits and two RBIs. With the win, USM moved up two spots to 18 in the RPI.

• In the Sun Belt, Coastal Carolina and Louisiana both entered the weekend as bubble teams, and Coastal is now moving more toward a lock after beating South Alabama 11-2 and moving to 22 in the RPI. Chris Rowan had four hits and three RBIs to lead the Chants offense, while on the mound, Reese Maniscalco was terrific out of the pen with four shutout frames. As for the Cajuns, they dropped a 2-0 decision to Little Rock with the Trojans’ Hayden Arnold striking out 12 in a complete game performance. As a result, UL is down to 61 in the RPI. Texas State clinched the regular season crown with an 8-7 road win over Georgia State. Six different Bobcats finished the night with multi-hit performances.

• Mercer is really scuffling down the stretch and is down to 50 in the RPI after dropping a 6-4 decision to Samford. Samford’s Colton Ledbetter had a big day at the plate, hitting a home run, tallying two hits and knocking in four runs, while on the mound, SU’s Jacob Cravey allowed three runs on seven hits in 6.2 innings of work.

• UCLA is up eight spots to 54 in the RPI after taking a 4-1 series-opening win over Oregon State. UCLA righthanded pitcher Max Rajcic put together another quality start despite some control issues at times. He struck out eight and allowed a run on two hits in six innings, while Alonzo Tredwell tossed two shutout frames out of the bullpen.

• Old Dominion was the lone C-USA bubble team to win on Thursday, taking down Western Kentucky 5-3 on the road. Blake Morgan threw five strong innings for the Monarchs, while Jason Hartline tossed 2.2 shutout innings out of the pen. UTSA was blitzed at home by UAB and dropped five spots in the RPI to 52, while Louisiana Tech lost to surging Charlotte and dropped to 57. As for the 49ers, they’re actually up into the mid-60s now.

• Kennesaw State was on the bad side of our bubble entering the weekend, but that could change with another win this weekend after taking down Liberty, 9-6. Josh Hatcher hit another home run and had a great night at the plate to lead the way. Kennesaw is up seven spots in the RPI to 45, which is just four spots behind Liberty at 41.