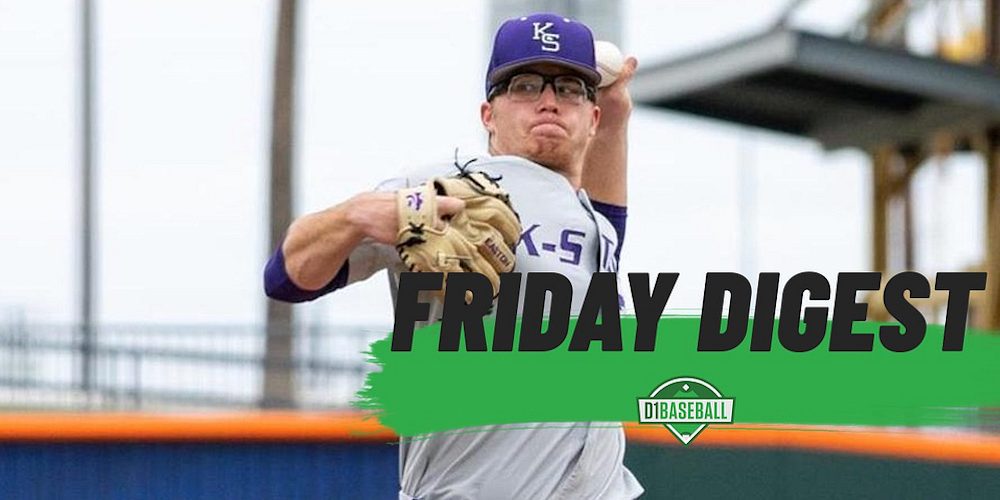 In one of the better pitching matchups you’ll see all-season long, premier prospect and Kansas State lefthanded pitcher Jordan Wicks matched up with Oregon State ultra-talented righthander Kevin Abel, who missed last season because of an injury. The two were as advertised.

Wicks put together a dominant start in a 3-2 win over the Beavers, striking out 10, walking two and allowing three hits in seven shutout innings. Wicks showed electric stuff, too, sitting 92-94 mph with his fastball in the early innings before finishing out his seven-inning performance with the offering sitting 89-91. The secondary stuff was strong for Wicks, too.

As for Abel, the former hero of Omaha for the Beavs, he threw 79 pitches and struck out seven and walked two in 4.2 innings of work. Abel allowed just one hit. As for his velocity, Abel was more his vintage self in the first couple of innings with a fastball topping out at 92 mph before settling in at 89-90 as the game progressed. Abel threw a steady diet of breaking balls against the Wildcats, while his command was somewhat spotty.

It was great to see Abel back on the mound, while Wicks met expectations.

2. Pitching Shines For Tulane And Louisiana

In what is one of the better series of Opening Weekend, Tulane All-American Braden Olthoff and Louisiana freshman Hayden Durke gave the fans something special to watch. Olthoff was his usual self in a 3-2, extra-inning win over the Cajuns, striking out seven and walking just one in 5.1 shutout innings. As for Durke, he got the Opening Day start over Connor Cooke and Conor Angel, and you saw why. Durke was up to 95-96 mph with his fastball and struck out five, walked two and allowed just a hit in five shutout frames.

As for the win for the Green Wave, Luis Aviles hit a walk-off two-run single in the bottom of the 10th to give head coach Travis Jewett his 100th win as a skipper.

But the story of the night was Olthoff and Durke. Wow.

College baseball is a results-oriented business. So, while Arizona pitching coach Nate Yeskie liked what he saw from Silseth in the fall and early this spring, he wasn’t going to be convinced until he saw talented righthanded pitcher Chase Silseth do it on the mound in live action.

Well, Silseth looked the part Friday night in a 3-0 win over Ball State. Silseth was 92-95 and up to 96-97 mph with his fastball against the Cardinals. Silseth struck out seven, walked two and allowed just three hits in 5.2 innings of work. That’s a strong day at the office for the righty.

Coming into the season, we all knew that Arizona would hit. But would the Wildcats pitch? They did on Opening Day with Silseth leading the way. File away this start. It could be a springboard for the righty.

We discussed this in the podcast a few days ago. But when it comes to consistent programs, many people don’t mention Florida Atlantic for some reason. Well, it never ceases to amazed me. No matter what the Owls lose, John McCormack always has his team ready for the next season.

The Owls were impressive in their season-opening 12-6 win over in-state foe UCF. FAU scored seven runs in the final two frames to win, with Jackson Wenstrom hitting a two-run home run and Wilfredo Alvarez also hitting a home run.

This is a fascinating series between a pair of teams I fully expect to be in the postseason mix in mid-May.

The Missouri Valley was one of the nation’s more intriguing leagues on paper coming into the season. Though usual suspects Dallas Baptist and Illinois State were in the mix for the projected league crown, the conference as a whole was not short of interesting teams.

We saw that on Friday.

• Evansville knocked off Georgia, 3-2, to begin the afternoon. The Purple Aces got a strong start from starting pitcher Shane Gray, who struck out four, didn’t walk anyone and allowed a run and four hits in six innings.

• Valparaiso put the icing on the cake for the MVC with a 6-2 win over UAB out of the CUSA. Ryan Mintz was the headliner in this one, striking out five and allowing a run on four hits in six innings.

The MVC went 4-0 as a whole with Southern Illinois also beating Jacksonville State.

This is one of the better series of Opening Weekend for good reason.

Virginia is a program, that in some ways, has lost some of its identity the past couple of seasons. However, this is supposed to be the year that everything turns back to normal in Charlottesville.

Perhaps Friday afternoon was a precursor for what is to come for the ‘Hoos.

Virginia scored two runs the first three innings and didn’t look back in a 2-1 win over a very solid Huskies club. UVA starting pitcher Andrew Abbott was brilliant against. UConn, striking out nine, walking one and allowing two hits in 5.2 shutout innings. The Huskies also got a quality start from power-armed righty Ben Casparius, who struck out six, walked one and allowed two runs and four hits in 5.2 innings.

I’m expecting this to be a terrific series.

7. Upsets Of The Day: West Coast Powers Go Down

If this is how the West Coast is going to be this spring, I might need to take a few breaths while I can.

What an Opening Day in the Golden State, where Santa Clara knocked off No. 11 UC Santa Barbara, 8-4, earlier in the day before San Francisco shocked No. 2 UCLA, 6-2, in the nightcap.

The Broncos entered this season with a number of returning players. They’re a veteran team, and one that plenty of coaches said to watch out for during the offseason. SCU’s Michael Bowes had three hits with a home run and the backend of the bullpen shined with Travis Howard striking out six in 3.1 innings.

The Dons gave the West Coast Conference another huge win Friday with a triumph over UCLA. Jordan Vujovich hit a home run and Landen Bourassa was strong on the mound, allowing a run on two hits in five innings. Alex Pham was terrific out of the pen with five strikeouts and just two hits allowed in three innings.

It was the WCC’s day.

If there is one team who has had another’s number the past few seasons, it’s the Gators over the Hurricanes. Miami had hoped to turn the tide Friday night, but fell to UF for the 18th time in the last 22 meetings, 7-5.

In his debut moving form the backend of the bullpen to the starting rotation, Miami’s Daniel Federman allowed four runs on seven hits in 4.1 innings, while Florida righthander Tommy Mace, who spurned the five-round MLB draft to return to college for another season, shined. He struck out eight, walked two and allowed a run on three hits in five innings. Christian Scott was outstanding, too, striking out two in three hitless innings of work.

Neither team had a monster day offensively, but Kendrick Calilao, Josh Rivera and Jordan Butler each had two hits, while Nathan Hickey hit the first home run for the Gators in their new ballpark.

It was a night to remember with the opening of the brand new park, and it was yet another win over UM.

Aaron Fitt had his instant analysis on tonight’s game, here.

The time between the end of last season and now gave a lot of people, including coaches, time to reflect on their lives and make decisions about their future. That certainly happened with long-time UNC head coach Mike Fox, who called it a career back in August after 22 seasons at the helm. He handed the keys to the program over to his long-time assistant, Scott Forbes.

Friday afternoon, Forbes won his debut as the UNC skipper with an 8-1 win over James Madison. UNC starting pitcher Austin Love was into the mid-90s with his fastball and struck out nine, walked one and didn’t allow a hit in six shutout innings. Love dominated the Dukes primarily by using his fastball.

Caleb Roberts led the Tar Heels with a pair of home runs and five RBIs.

Forbes will forever remember this one.

In what was a well-pitched game throughout the night, Sacramento State entered the ninth inning trailing Arizona State, 2-0, thanks to a stellar performance by second-year ASU freshman Cooper Benson. But that was performance was all for nothing.

Why? With one out in the ninth, Sac State’s Dawsen Bacho smashed a grand slam to left field to give the Hornets a 4-2 victory. They’d finished out the game and the win in the bottom of the ninth inning.

Benson deserved better on this night. The hard-nosed lefty struck out eight, didn’t walk anyone and allowed just one hit in six shutout innings. Sac State’s Scott Randall also made a strong impression, striking out six, walking one and allowing two runs on four hits in five innings.

Last but not least, kudos to the Lancers of Cal Baptist, who roughed up WCC favorite Pepperdine, 9-1. Damon Keith hit a pair of home runs to lead the Lancers, while on the mound, Bryan Pope struck out nine, walked two and allowed a hit in five shutout frames.

Kendall Rogers
wpDiscuz
You are going to send email to