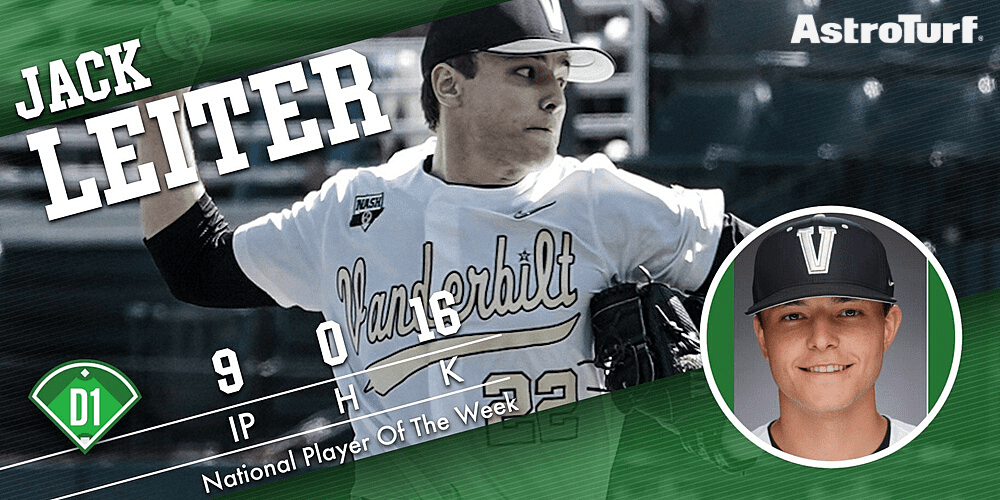 Leiter was accomplished against non-SEC competition early last season. But coming into the 2021 campaign, at least some were wondering how he would fare against the rugged SEC. Well, if his first-ever start against an SEC team — South Carolina — was any indication, what a season it’s going to be for the second-year Commodores freshman.

Leiter tossed the first SEC no-hitter since 2016 and the first nine-inning no-hitter in regular season play since 1971. Of course, Kumar Rocker made history back in 2019 by throwing a no-hitter in a Super Regional bout against Duke. But for Leiter, his performance was legendary, and for that and more, he is this week’s D1Baseball/AstroTurf National Player of the Week.

“I probably hadn’t thrown that many pitches in my whole life,” Leiter said. “Having not experienced that it kind of got easier as things went on, in a way I guess, because I had such a good feel for the mound because I have been throwing on it for a while.

“Everything just kinda felt normal. Mechanically I was just thinking me and the glove and just stayed directional to the catcher (CJ Rodriguez). I was getting after it a little more in that last inning, of course.”

Leiter’s no-hitter against the Gamecocks was incredible for a multitude of reasons. For starters, he was very close to throwing a perfect game. As a matter of fact, he walked the first hitter of the game on a 3-2 count and proceeded to retire 27-straight batters after that. Leiter struck out 16 Gamecocks, and every strikeout came via a fastball. Ironically enough, all of Rocker’s strikeouts two years ago against Duke came via sliders.

Though Leiter is our Player of the Week, here’s a hat tip to Florida State slugger Robbie Martin for his week in wins over Florida and Miami (three times). Martin finished the week hitting .550 with three home runs, three doubles and 12 RBIs, along with a 1.150 OPS.