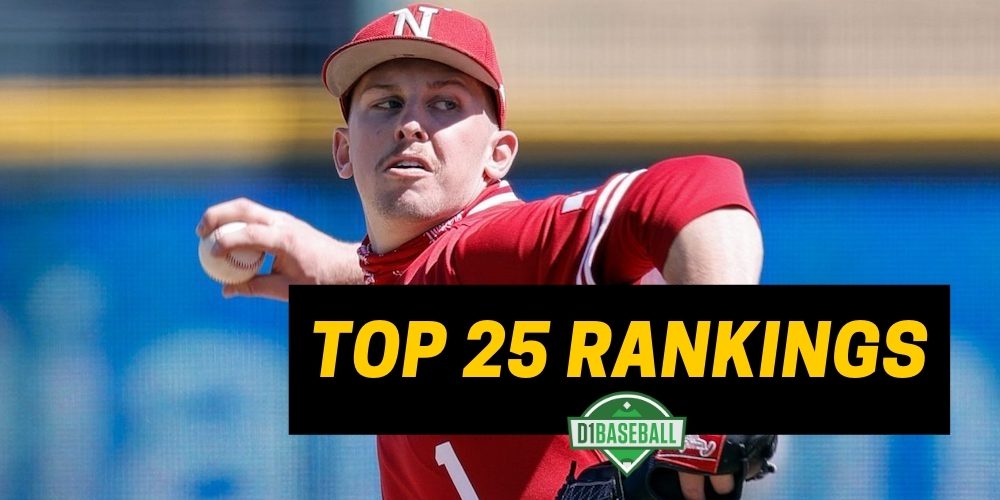 Weekly Chat | Who caught our attention?

The top of the D1Baseball Top 25 Rankings remains the same as Arkansas is yet again the No. 1 team in the country after taking a road series from South Carolina, but there’s plenty of movement elsewhere.

Vanderbilt and Texas are on Arkansas’ heels at Nos. 2 and 3, respectively, after having strong weeks. The Commodores took two of three from Mississippi State at home, while the Longhorns hit the road and took two of three from previously Top 25 Oklahoma State. Tennessee rejoined the top five and comes in at No. 4 after another strong week, while TCU enters the top five after taking care of business against Kansas over the weekend.

Four new teams entered this week’s rankings — Gonzaga, Nebraska, Southern Miss and UC Irvine. Gonzaga, Nebraska and UC Irvine are all leading their respective conferences. The Bulldogs have quite an impressive resume so far this season and have established consistency, Will Bolt is making waves in his first full season with the Huskers, Southern Miss had yet another solid weekend in C-USA action and UC Irvine leads the way in the Big West and is coming off a huge home series win over Oregon State.

The SEC leads all conferences with seven teams in our rankings, while the ACC and Conference USA each have four teams, the Big 12 and Pac 12 each have three teams, and the Big West, Big Ten, WCC and American each have one representative.

The rankings are compiled by Kendall Rogers, Aaron Fitt and Mike Rooney.