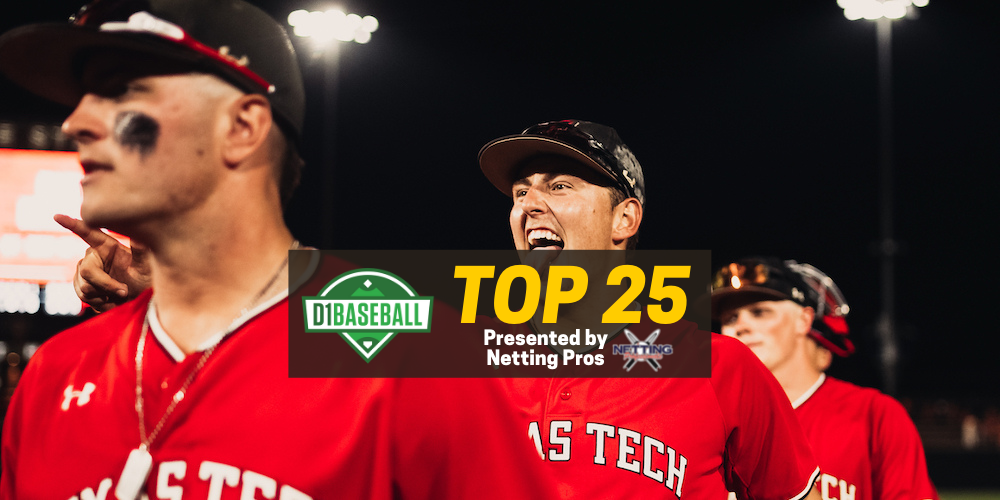 The latest D1Baseball Top 25 Rankings are out, and there’s no change atop the rankings as Tennessee remains No. 1 after taking two of three from Georgia over the weekend.

While Tennessee stood pat atop the rankings, there were plenty of changes elsewhere. Oregon State remained at No. 2 despite losing a road series to Arizona over the weekend, while Virginia Tech, Stanford and Texas Tech all entered the top five after outstanding weekends — the Hokies took a home series from Louisville, Stanford continued its impressive ways in the Pac-12 and Texas Tech did a clean sweep of Oklahoma State on the road.

Texas A&M continued to gain ground, moving up from No. 10 to No. 6 following a home sweep of Mississippi State, while Arkansas, Oklahoma State, Miami and Louisville round out the Top 10. In other changes, Texas State, Notre Dame and Maryland each moved up two or more spots, and Florida State reentered the Top 20 after a home series win over rival Miami.

Vanderbilt continues to move up in the rankings, too, going from No. 24 to No. 21 after a road series win over Arkansas, while TCU is the lone team to enter this week’s Top 25 rankings, replacing LSU, which got swept at home by Ole Miss. The Horned Frogs scored 53 runs in three games against Kansas over the weekend and are tied with Texas Tech in terms of percentage points atop the Big 12 standings.