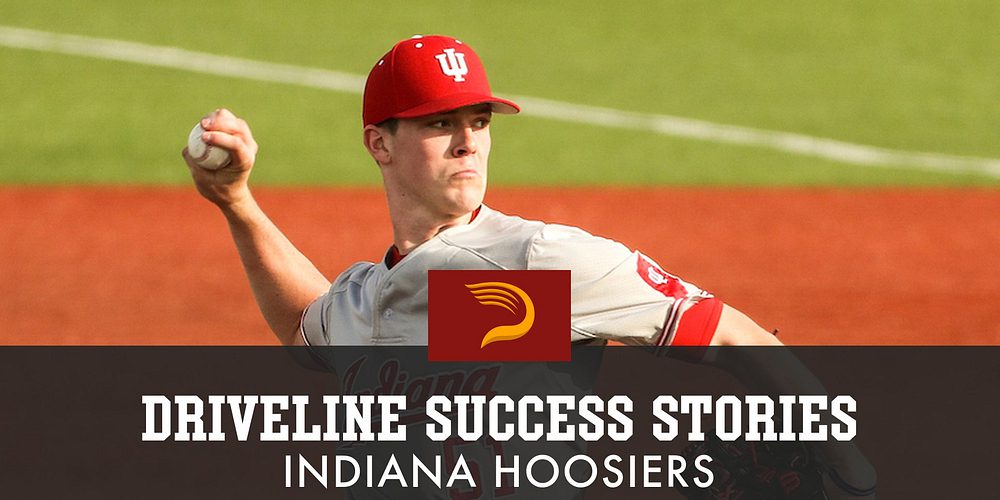 In just a short time in Bloomington, Jeff Mercer has left an indelible mark on the Indiana baseball program. In 2019, the Hoosiers took home a conference title and corresponding regional bid in route to Mercer being named the Big Ten Coach of the Year.

That season, his first at the helm, the Hoosiers hit the second most home runs in the country (95), finishing only behind national champion Vanderbilt, who played 11 more games. Power numbers of that sort are atypical for cold weather clubs, and it’s not entirely coincidental that Indiana also commenced a formal relationship with Driveline Baseball that very same year.

In prior conversations with Coach Mercer, he’s emphasized the importance of preparation. He’s articulated compelling arguments about players putting their bodies in a position to be successful, about using rotational force and kinetic energy, and about being able to mechanically align a swing in a way that hitters can backspin a ball into a gap.

Through data driven research, Driveline has helped Indiana Baseball put these techniques into practice, and together they’ve empowered the players to take ownership of their own player development journey.

You don’t technically need to be a rocket scientist to develop a baseline understanding of Driveline concepts and then apply them to collegiate player development, but the Hoosiers happen to have an actual rocket scientist doing just that.

After concluding his playing career as a pitcher for the University of Dayton, Denton Sagerman earned a master’s degree in Aerospace Engineering and subsequently put those skills to work while employed at nearby Wright-Patterson Air Force Base. It was during this time, while earning a second master’s in Sports and Athletic Administration that Sagerman interned for then Wright State coach Jeff Mercer.

“I think before I was even at Wright State, I was attracted to Driveline,” said Sagerman. “From the start, I was interested in how they approached player development. Obviously, the use of technology is more in my realm so that drew me to them early on. As I got to Wright State, we incorporated more of the mindset of testing and quantifying our player development process on a smaller scale, while also using their plyo and weighted balls, until we could outgrow that and had the need and resources for the various technologies.”

When Mercer landed the Indiana head coaching gig ahead of the 2019 season, Sagerman was brought on as the Director of Operations/Pitching Development. In putting together a road map for how to best to design their own internal player development program, the coaching staff was struggling to organize the massive amounts of data that they were collecting on players and displaying it in an easily digestible format for players and coaches alike.

Leveraging an early-season trip to the Pacific Northwest when the Hoosiers were playing in the Seattle Baseball Showcase, the coaching staff paid a visit to the Driveline facility to get an up close and personal look at the application of their fundamental concepts.

“The whole staff was blown away with the operation and their organization,” said Mercer. “I think sometimes what’s happening in a facility can get lost in translation, not just Driveline but with a lot of things. As a hitting coach, I might teach something in house and then they go try to teach it to someone else, my original message might get lost. So, you try not to make an evaluation on what someone is doing on second, third and fourth-hand information. We wanted to go see it firsthand, and what we realized is that these guys think just like we think. It really is just a data driven, scientific approach with actual unbiased studies and it falls right in line with how we operate. We realized at that point; we were going full board with this.”

Sagerman, too, lauded the importance of the in person visit and the relationships that have been built with the Driveline staff.

“They opened doors and showed us around in depth,” said Sagerman. “I think that’s one of the misconceptions is that they’re solely technology based, and they are all world class in that area, but their goal is to make players better the fastest, which comes in the form of quantifying key performance indicators, training for those that give each player the best chance at being successful, and then clearly communicating that data and goals to the player. They use a model to test and retest, using data and technology to validate what they’re doing, which is what every coach should be striving to do. You may think that what you’re doing works, but if it does you should be able to show that through quantifiable results.”

Although the Hoosiers were enjoying the respective benefits of various player development tools such as HitTrax, Rapsodo, WIN Reality, TrackMan, and Blast Motion, each of these technologies stored their data in individual cloud-based repositories that don’t speak with one another. Upon their return from Seattle, the Hoosiers began to use Driveline’s TRAQ system. TRAQ is able coalesce this data and organize it in a retrievable hub that allows the data to be analyzed by the athlete, coaches, and strength and conditioning staff alike.

“It basically shows a roadmap of that guy’s player development journey,” said Sagerman. “So he can go back on our TRAQ system and pull up videos of from two years ago about a pivot pickoff drill, and map a timeline. And then he has the TrackMan, Rapsodo and Edgertronic data from that date. So that guy can now map out this is where things went wrong or weren’t going wrong and make adjustments. We’re always trying to get to adjustments quicker. Every coach is just trying to get to that as quick as we can, time can be our biggest advocate or our biggest enemy. The misconception is that we have four years to get guys to their best physical standpoint. We have days, weeks, a month; we have to get to adjustments and adaptations so much quicker so we can unlock the next area that could help a player.”

One of the many detrimental impacts that COVID-19 has had on collegiate baseball landscape is that players have had less time for hands on instruction with university personnel. Mercer credited TRAQ software with arming the players with the tools to train remotely. Using the software, each player has his bullpen video, HitTrax profile, and daily mobility exercises his fingertips at all times.

Likewise, Sagerman spoke to the advantages of players utilizing TRAQ while they’re away.

“I think that’s another huge benefit of TRAQ is that we can program for them in the offseason whether it’s in their own voluntary time or during breaks,” he said.“We need to be able to maximize the time that they’re away from the field because they’re going to have valuable player development time apart from the 8-to-20 hours a week that they’re with us coaches. We need to maximize the other time and make them be their own best coach. TRAQ gives them the tools to be able to visualize their data, visualize all their workouts all their video – all that stuff within one hub has been huge for us.”

Sagerman went on to explain that players taking ownership of their player development journey will ultimately help prepare them for the next level.

“The reality is they’re going to have a lot of different pitching coaches, a lot of different hitting coaches, all with different pitching philosophies or hitting philosophies, he said. “The consistent part in their own career is themselves. Manning them with as much data, video and a clear player development plan for them is what’s going to be the constant in their career. It allows them to be the biggest active participant so they don’t need to rely so heavily on the auxiliary pieces.”

When players are struggling through that type of adjustment, Mercer explained that it’s not as simple as just fixing the swings, but rather they need to fix the way a player is programed to move.

“When you look at a guy like Grant,” Mercer continued. “He’s done a tremendous job on putting in the work to become more mobile, a better rotator and a better mover and that’s really helped him.”

The standout centerfielder went on to explain how he was able improve his hip awareness, and how that translates into optimizing his explosiveness.

“When talking about being able to be rotational and use my hips more while I’m swinging,” said Richardson. “Using the core velocity belts that Driveline introduced really helped because we have a wrap around our hip and it’s connected to a weight, and a rope that pulls our hips back to where we need them to be in our loading phase. So, warming up with that has gotten me to actually feel my back hip internally rotating and being able to fire through while I’m hitting.”

“Another thing I thought they did a great job with is finding our flaws in our bodies,” Richardson continued. “Whether it’s flexibility or being able to rotate better in certain positions, they gave us different stretches to improve that over time. They gave us individualized warm up routines to increase mobility in our shoulders and hips. All kinds of muscle type things to help us become more mobile and more explosive to the ball.”

Defensively, Mercer credits the mobility exercises with opening up the defensive options in the lineup. A high school backstop, Drew Ashley bounced around the diamond for his first two seasons, carving out at-bats primarily on the strength of his offensive ability. Through diligent work to improve his flexibility over Christmas break before the 2020 campaign, he was able to put himself in a position to be succeed defensively, earning reps behind the dish. As a result, Ashley caught the Sunday game of the opening series at LSU — a win and high point of the shortened season.

Similarly, several pitchers have taken significant steps forward since setting foot on campus thanks, in part, to the Driveline principles. One of those guys, McCade Brown, was pitching in the 85-to-88 mph range two years ago, now effortlessly sits at 92-to-95 mph. While Brown might be the highest profile beneficiary of the program, Sagerman was quick to point out that each member of the pitching staff has realized significant gain as a result of the partnership.

Last fall, several members of the Driveline team made the trip to Bloomington and ran each pitcher through biomechanical assessment. As a result, they players were able to see their individualized kinetic sequence and find ways they can gain efficiencies.

“Just being able to find the last 5% that can take a guy from 89-to-92 to 92-to-95 is huge for us,” said Sagerman. “But it doesn’t even have to be that. It can be like a guy that was 86-89 to like 88-91 and can hold that for six plus innings at locations that are advantageous for his pitch profile. That’s a big difference in that guys career. Those final 2-5% can be the difference in hundreds of thousands to millions of dollars over a life span of a career. Or it takes a guy that would go undrafted to a 12-15th round pick.”