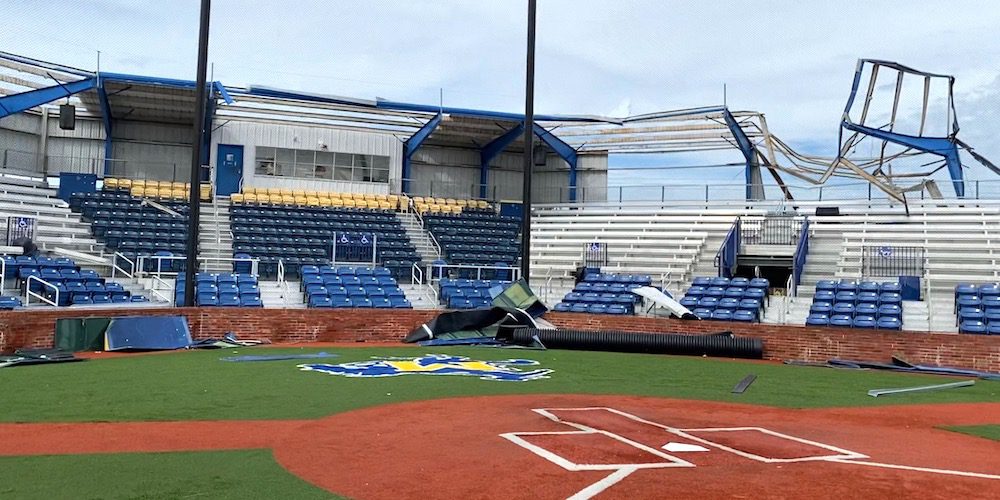 Justin Hill’s past comments about his love for McNeese State and Lake Charles make a lot more sense now.

I guess you could call him #LakeCharlesStrong.

Two falls ago, as I made my way through the State of Louisiana from Houston to attend fall workouts at McNeese, Louisiana and LSU, I made a pit stop in Lake Charles to grab some lunch with Hill, the 41-year-old skipper who recently completed his seventh season as the head man for the Cowboys. The cuisine, of course, was Darrell’s, a Lake Charles staple famous for their po’ boys. It’s worth mentioning Darrell’s made it through Hurricane Laura relatively well.

The conversation throughout that lunch was the usual between a coach and media member. Who is going to be your Friday night pitcher, what’s the future look like, what facilities upgrades are you about to do? You know, those kinds of things. But something else stood out about that conversation — Hill’s intense love for Southwestern Louisiana.

Hill has had success at McNeese and reached a high point in 2019 when he guided the program to the NCAA tournament. And like many younger coaches with a strong pedigree and who have experienced success, it’s easy to look at the future. What better might come along for me? That feeling is natural for many coaches, but not for Hill. Despite being an assistant at LSU in the past and taking in the bright lights of the SEC, he’s perfectly content where he is in Lake Charles if it’s his last stop, and he means it.

“I really, really like Lake Charles and I love McNeese,” Hill said at the time. “If this was my last job, I am more than fine with that. I’m perfectly fine with making that statement.”

In some cases, you’d consider that to be somewhat lip service. But not with Hill. With him and the McNeese baseball staff, the Lake Charles community may as well be family, and that has never been more evident than it was the past week in the wake of Hurricane Laura, which made landfall just south of the city in Cameron, La., with sustained winds of 150 mph — the 10th strongest hurricane in United States history.

As Hurricane Laura barreled over Cuba and made its way through the Gulf of Mexico, forecasters weren’t 100-percent sure where it was headed. Some models had it going up the Texas coast and straight into the Houston area, while others had it going into Southwestern Louisiana.

In these situations, you don’t have time to make snap judgements. You either prepare to hunker down and deal with the storm or you head out of town. Hill and his wife and two kids decided to stay put.

With each passing day leading up to landfall, the models shifted Laura away from Houston and toward the Louisiana border with a bullseye squarely on Lake Charles. But when reached via text before the storm hit, Hill said the time to evacuate had passed. He was in it for the long haul.

He and his family made preparations to ride out the storm not knowing what to expect. He had gone through Hurricane Rita, which was a powerful storm as well, but with Laura, forecasters were calling for 150-plus mph winds along with a potential storm surge of 15-20 feet around the city. That uncertainty was nerve-racking for Hill and others around Lake Charles.

Hill evacuated his home and set up shop for landfall at the Lake Charles Toyota dealership with 30-40 other people. He said the word intense to describe riding out the storm, falling just short of uttering the word ‘scared’.

“It was intense. It was really intense. I don’t think this is a situation you can really prepare for,” Hill said. “We felt pretty good about where we were at — not at our house — but there’s uncertainty. We stayed behind for a few reasons.

“My wife has a business here, right behind the ballpark, actually,” he continued. “And the other thing is that I’ve got so many players here — half of our roster is from this area. You don’t know what’s going to be needed, and we were ready to help our players and the community. We had boats setup behind the dealership and everything ready to roll.

“The intensity of the storm was certainly worse than predicted,” he added. “The storm, it just maintained strength the entire time it was going through Lake Charles. But thankfully, we didn’t get that storm surge that everyone kept talking about. I can honestly say I was never worried about my safety.”

The hurricane plowed through Lake Charles around 1-2 a.m. and didn’t leave the area for several hours. Some in the car dealership poked their heads out and meandered around the property and area of the city early in the morning around 6 a.m., but Hill believes it was around 9 a.m. that he finally exited to take a look around.

The water wasn’t there, but the damage was.

“We knew the water wasn’t there, but we had some guys go out and do some recon before we went out around 9 a.m., and it wasn’t good,” Hill said. “It wasn’t pretty. There was a lot of damage.”

The damage from a personal standpoint for Hill will take time to recover from. His home has some missing shingles and some holes that have since been covered up, while his wife, Melissa, has a creative craft studio business behind Joe Miller Ballpark that may or may not be salvageable. Hill received a helping hand late last week when Southeastern Louisiana athletic director Jay Artigues and head baseball coach Matt Riser made the trek from Hammond, La., to help Hill’s family clean up their home so he could focus his effort on others sooner rather than later.

“Jay and Matt sent me a text the next day asking if I needed any help. I’m one of those guys who has a hard time saying ‘yes’ to that question, but me and those guys — we go way, way, back,” he said. “But those guys showing up unexpected? It didn’t surprise me.

“The people reaching out all over baseball has been overwhelming to be honest with you,” he continued. “I know the LSU baseball family has been reaching out and offering help as well. It’s been really special to see.”

With this house taken care of, Hill has turned his attention to helping others around Lake Charles.

“The big thing right now is we have to help people get their homes secure. Mine is secure — we have some plywood over windows and things like that — it doesn’t need to be fixed today,” he continued. “But other people? They need the help and we need to go help them.”

Hill and McNeese State take a lot of pride in Joe Miller Ballpark.

As with most schools in the Southland Conference, McNeese has to find creative ways to make renovations and other projects happen.

Hill has guided the way and helped move some serious dirt since taking the head job in. Lake Charles. ‘The Jeaux’ as the locals call it, has gotten a new brick backstop and net in recent years. They’ve added a padded wall and new outfield fence, a new field surface and a playground. McNeese also was in the middle of a bullpen renovation project when Hurricane Laura wreaked havoc on the ballpark and campus.

Many of those items are beyond repair and will need to be replaced. The Cowboys will also have a lot of work to do to the team clubhouse, which now has a couple of holes in the sides of the building, along with significant water damage from rainfall.

Just a few hours after the hurricane hit, Hill went live on Periscope to give the baseball community an assessment of the ballpark’s damage. Hill stopped himself several times while describing the destruction, refusing to use the word ‘tragedy’ to describe anything he was seeing with the ballpark. Despite the sinking heart feeling of seeing something you’ve worked so hard to build in such despair, the head coach, on brand, shifted his thoughts and focus to other people.

“I still don’t know the full extent of our damage. We haven’t been able to get into every single area and we have to wait on some adjustors,” he said. “We might not have anything from a physical standpoint left — practice gear, uniforms, pitching machines, things like that. It might all be gone, and that goes for the field, which was ripped off the foundation during the storm.

“You think about the ballpark, and you have an eye on that, but there’s a time and place for that. There’s a time and place for rebuilding,” he continued. “We’re still in recovery mode around here. There are still people around here looking for help putting tarps on roofs and things like that. So, the ballpark is one of those things that can wait.”

Looking ahead, Hill is unsure what the fall looks like and what the future of the ballpark might look like. In terms of fall workouts, the Cowboys obviously will not be able to play at home, and the fall semester has officially gone virtual because of the hurricane. However, the skipper would like to get his Cowboys back to Lake Charles to have a semblance of fall workouts at some point. If that means going to a local field in a city park or something, so be it. He wants his team to be able to experience fall workouts. Still, finding a field that isn’t severely damaged could prove difficult.

The Cowboys might have to get creative in terms of scheduling in the spring as well. It would be surprising at this point if Joe Miller Ballpark is ready for action in a few months, and there could be a total rebuild on the way. In the northern part of the state, Louisiana Tech experienced a massive tornado on campus a couple of years ago, and has since begun building a new ballpark, thanks to help from fundraising and FEMA grants. McNeese could soon be in the same boat.

“The goal for us this fall and in the spring would be to find somewhere to play in Lake Charles,” he said. “But right now, I know life and sports are different, and sports aren’t that important right now. But guess what? When that calendar turns, they’re going to be important again.”

For now, the head coach is waiting for more direction from his university administration and is spending his time helping those most in need around the community. Hill said 97 percent of the city’s schools received damage and are unusable, and worst of all, running water and electricity are sparse around the city. Big leaguers such as Kevin Gausman, Alex Bregman, Wade LeBlanc and former McNeese standout Jace Peterson have pushed a GoFundMe in recent days that supports relief to the Lake Charles area. You can find that, here. The university is accepting donations, here.

But as Hill learned about Lake Charles a long time ago, that area is filled with strong people who have persevered through the worst of storms. This is just another challenge that they’ll eventually overcome.

As for Hill, he’s right where he wants and needs to be. This just reinforced it.