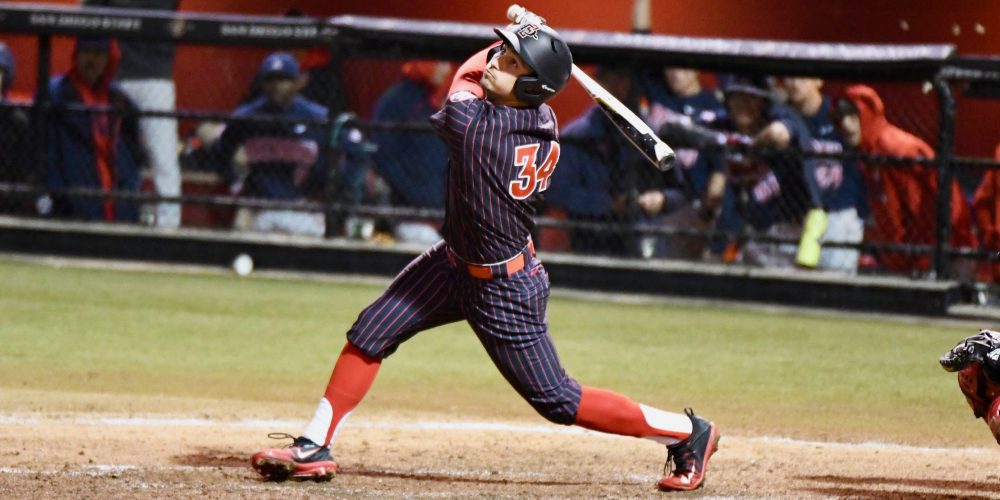 SAN DIEGO — It went down in the box score as a game-saving outfield assist. Chase Calabuig preserved San Diego State’s 4-3 lead by throwing out Michigan Christian Bullock at the plate in the the eighth inning, propelling the Aztecs to victory by that same score.

But the box score doesn’t do it justice. And anybody watching from the stands surely failed to notice the subtlety of that big play — I certainly missed it.

With the bases loaded and two outs in the eighth, SDSU leading 4-2, Jonathan Engelmann came to the plate and hit an opposite-field single to right, where Calabuig fielded it. The lead runner scored, but Calabuig cut down the trail runner, which would have tied the game.

“Chase pre-planned that. We had talked about, we’re in no-doubles situation, we don’t want to get beat, but then all of a sudden it changed, and he actually came in about five steps, he pre-planned it,” San Diego State coach Mark Martinez said. “That’s the advantage of having a senior outfielder. We got lucky and the guy hit it right to him, and he pretty much airmailed it all the way home. Unbelievable play, saved the game for us.”

“To be honest, in my warmups today, I had no velo behind it, I was not feeling good,” Calabuig added. “So when it came out of my hand, I honestly thought it was probably like a two-hopper, and I was like, ‘Aw, I screwed it up.” But then (catcher) Dean (Nevarez) was standing tall and I was like, ‘Wait a minute, that might actually get there.’ And then right on the money, so I can’t argue.

Calabuig’s pre-pitch adjustment was characteristic of a winning veteran player who finds lots of different ways to help his team win. Calabuig has played 187 games in his four-year career, which started with a bang when he earned freshman All-America honors in 2015. He reached base safely in 32 consecutive games during one stretch as a senior, though he hit a bit of a freshman wall late in the year and cooled off a the plate, still finishing with a solid .305 average. He slumped to .221 as a sophomore, then rebounded to hit .305 again as a junior last spring, with more power — after hitting just two homers and recording 17 total extra-base hits over his first two seasons combined, Calabuig hit seven homers and had 21 extra-base hits during his junior year, as his slugging percentage jumped nearly 200 points to .469.