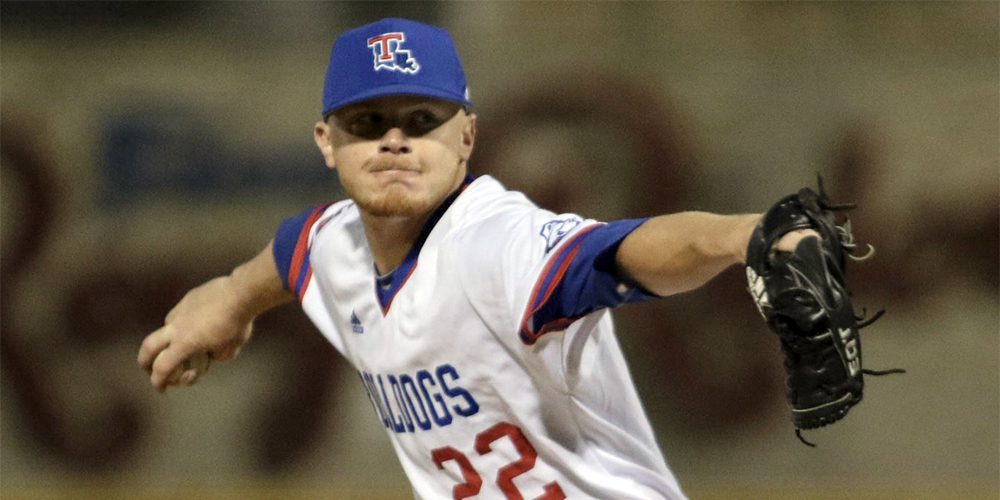 Matt Miller’s start against Texas A&M at the Frisco College Classic might long be thought of as the turning point for Louisiana Tech’s 2018 campaign.

Before facing the Aggies and heading off to the Dallas area, the Bulldogs undoubtedly had question marks. Tech head coach Lane Burroughs felt okay about his team the first couple of weeks of the season, but also felt like something was missing, especially after dropping a midweek bout to Northwestern State to drop to 5-4.

But everything changed on a Friday night in front of an overwhelmingly maroon crowd.

Miller was masterful against one of the nation’s best teams. The righthander went up and down and side-to-side in the strike zone and kept the Aggies off balance. He struck out six batters, didn’t walk any and allowed a run on five hits in seven innings. His start, along with a home run from Tanner Huddleston, gave the Bulldogs hope. They beat the Aggies 4-2 and also earned a win over a California club that likely will end the season in the NCAA tournament. They finished the tournament with a 2-1 mark.

It was a turning point for this Louisiana Tech club that now has won 11 of its last 12 games with a midweek bout against UL Monroe and a road series against UAB coming up.

“You know, we’d lost to Northwestern State in extra innings on Wednesday, and I got up the next morning thinking we’re not playing real good. We were scuffling a little bit, then I realized we had A&M, Cal and Baylor staring us down,” Burroughs said. “That’s what I had to look forward to.”

But things felt different once the Bulldogs arrived in Frisco. Burroughs said his team had a great practice the night before the tournament began, and they showed up Friday to face the Aggies with a sense of looseness and confidence. That approach paid dividends.

“We showed up to the ballpark on Friday and it felt like we were playing away game. It was a road game and our guys were locked in from the start,” he said. “We pressured them a little bit and we were running the bases like crazy. We didn’t look back and that was such a big win for us against a good club with a big crowd.”

The Bulldogs haven’t looked back since that point. They began Conference USA play at home this past weekend with a series sweep over Rice. In that series, Tech allowed 10 runs in three games and showed a terrific offensive approach, while also doing a good job of hitting with runners in scoring position.