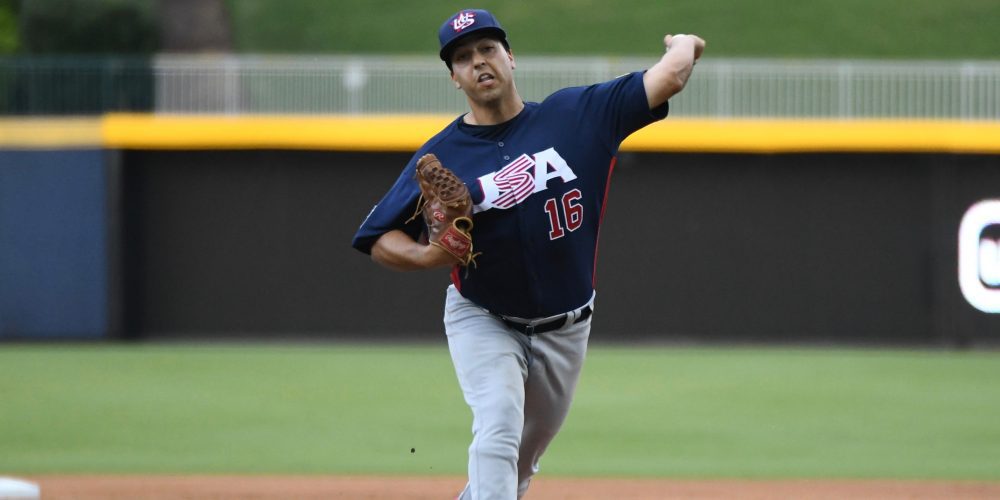 DURHAM, N.C. — For the third straight summer, USA Baseball’s Collegiate National team has won its annual friendship series against Cuba. Team USA clinched the five-game series with a 5-0 win on Tuesday night in Charlotte, as Nick Madrigal went 2-for-5 with a homer and Seth Beer had a key two-run double behind Tyler Holton (4 IP, 3 H, 0 R), who combined with five relievers on a three-hit shutout.

That stellar mound work was a continuation of what Team USA has done throughout its 11-1 summer campaign, and in each of the first three games of the Cuba series. Team USA owns a sparkling 1.67 ERA overall this summer, and it has allowed just two earned runs (0.64 ERA) in three games against Cuba, to go along with three unearned runs.

The offense has delivered against Cuba as well. Outfielder Steele Walker, the MVP of Team USA’s series sweep of Chinese Taipei, has been even hotter in the first three games against Cuba, going 8-for-13 (.615) to boost his overall summer average to .465. He, Madrigal (5-for-15 in the Cuba series) and South Alabama’s Travis Swaggerty (5-for-10) have been disruptive forces in the top third of the lineup, leading Team USA to a .294 average in the first three games against Cuba.

In Sunday’s series opener, Beer delivered a walk-off single in the 10th to lift Team USA to a 5-4 victory. International tie-breaker were in effect in that game, which meant each team started the 10th inning with runners at first and second, and it got to choose which part of the lineup started the inning at the plate. Cuba chose to bunt its leadoff man in the top of the 10th, and it got both runners home. But Team USA showed faith in Madrigal’s hitting ability, choosing him to lead off the inning and having him swing away. He rewarded that faith with a line-drive single to left to load the bases. Swaggerty then followed with a bases-loaded walk, and Walker delivered a game-tying RBI single to right, setting the stage for Beer’s walk-off hit.

Team USA won Game Two of the series handily at the Durham Bulls Athletic Park on Monday, jumping out to a five-run lead after two innings and cruising to a 5-1 victory. Swaggerty’s one-out double in the first got USA’s offense going, and Walker followed with a two-run homer to right on a high fastball one batter later. Texas A&M’s Braden Shewmake led off the second with a double and later scored on Madrigal’s RBI single to right. The next batter, Swaggerty, delivered a two-run double to cap Team USA’s scoring. Swaggerty’s two doubles went to each gap, as he continued to show a mature gap-to-gap approach and a pretty swing from the left side. In addition to being a very good runner, Swaggerty has impressed with his strength this summer.

But the strong pitching should not be overlooked. Let’s take some time to break down some of the arms who have shined for Team USA this week.