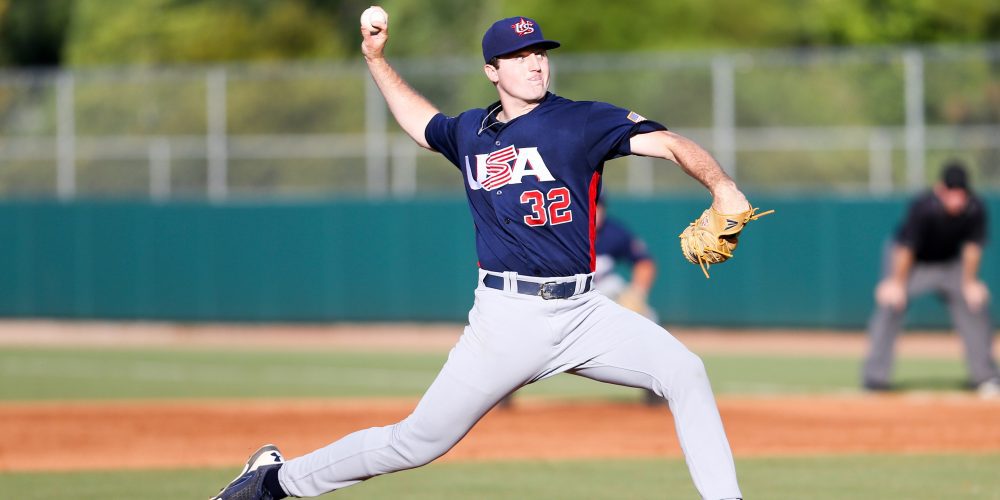 Team USA finished up a very successful summer with a 15-5 record, including a 10-4 mark in international play. The Americans won all three of their international series — against Chinese Taipei, Cuba and Japan. As usual, pitching was Team USA’s hallmark — the staff posted a 2.15 ERA on the summer. Raby led the way, going 3-0, 0.00 with just one unearned run allowed in 19.1 innings. Catcher Grant Koch (Arkansas) led the team in hitting against Japan (.353) and overall (.372/.500/.535 with two homers and nine RBIs in 43 at-bats).

Scouts weren’t dazzled by the overall level of talent on the team, largely agreeing that the crop was average at best. The high-end arms stood out more than the bats, and four of the top five players on this prospect list are pitchers.

After consultation with scouts and coaches, we ranked the prospects who appeared for Team USA and wrote scouting reports on each of them. Here’s a breakdown of the top 10 prospects. We’ll have reports on the rest of the team tomorrow.

Mize had a breakout sophomore year for Auburn this spring, going 8-2, 2.04 with a dazzling 109-9 K-BB mark in 83.2 innings. He missed some time down the stretch with arm fatigue/soreness, but the returned in time for the postseason and then dominated in two appearances for Team USA before being shut down again with more soreness. Assuming he stays healthy next spring, Mize has a chance to be selected near the top of the draft, because his stuff is simply electric and his strike-throwing prowess is impeccable for a power pitcher. He has an athletic 6-foot-3, 208-pound frame and a smooth arm action that produces easy 93-96 mph heat, and he can really pitch off his fastball, which has good arm-side run and some downward plane. His go-to secondary pitch is a swing-and-miss split-change at 84-88 with late tumble, rating as a plus pitch when he’s got it going. He relied primarily on those two offerings this summer, when he posted a 0.00 ERA and an 8-0 K-BB mark in seven innings. He lacks a wipeout breaking ball, but his short 85-87 slider is a decent third offering with a chance to be solid-average. If he can develop that pitch more, he’s got a chance to be a true top-end of the rotation starter in the big leagues.