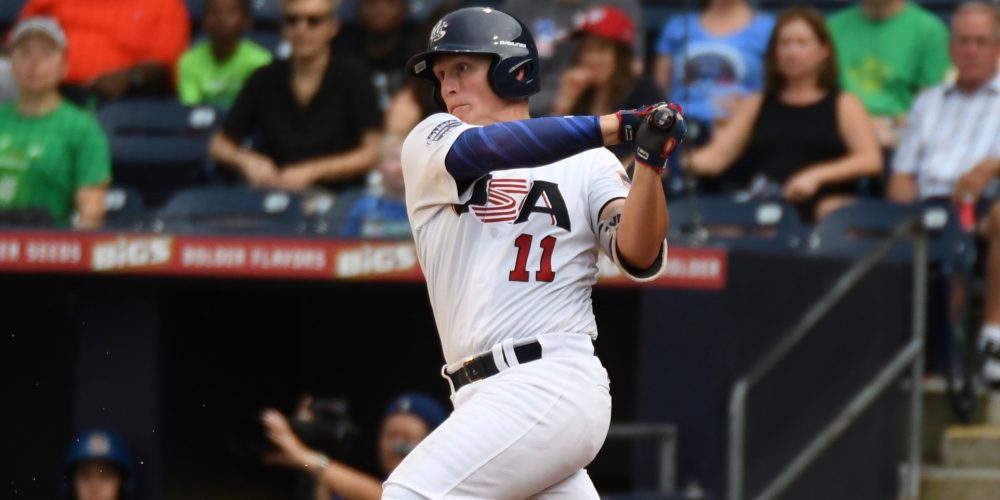 Team USA concluded its 2017 schedule by winning the rubber game of its five-game series against Japan 3-1 on Monday in Nashua, N.H. Andrew Vaughn (California) had two hits and drove in the go-ahead run in the sixth inning; he hit .333 in the series to win the MVP award.

Team USA finished up a very successful summer with a 15-5 record, including a 10-4 mark in international play. The Americans won all three of their international series — against Chinese Taipei, Cuba and Japan. As usual, pitching was Team USA’s hallmark — the staff posted a 2.15 ERA on the summer. Raby led the way, going 3-0, 0.00 with just one unearned run allowed in 19.1 innings. Raby’s velocity was down from the spring, but he was still able to dominate thanks to his advanced pitchability. Fellow starters Steven Gingery (2-0, 1.12), Konnor Pilkington (0-0, 2.65), Holton (2-0, 0.69) and Dalatri (0-1, 3.27) also performed well this summer, while Woolfolk posted a 0.87 ERA and four saves in 10 relief appearances.

Catcher Grant Koch (Arkansas) led the team in hitting against Japan (.353) and overall (.372/.500/.535 with two homers and nine RBIs in 43 at-bats). Steel Walker (Oklahoma) was named MVP of both the Taiwan and Cuba series, and even after going 2-for-18 against Japan, he still finished the summer hitting .333. Dynamic outfielder Travis Swaggerty (.328) and second baseman Nick Madrigal (.258) were the only other Team USA players to hit above .250 on the summer.

We’ll have more in-depth reports on Team USA’s prospects in the coming weeks.