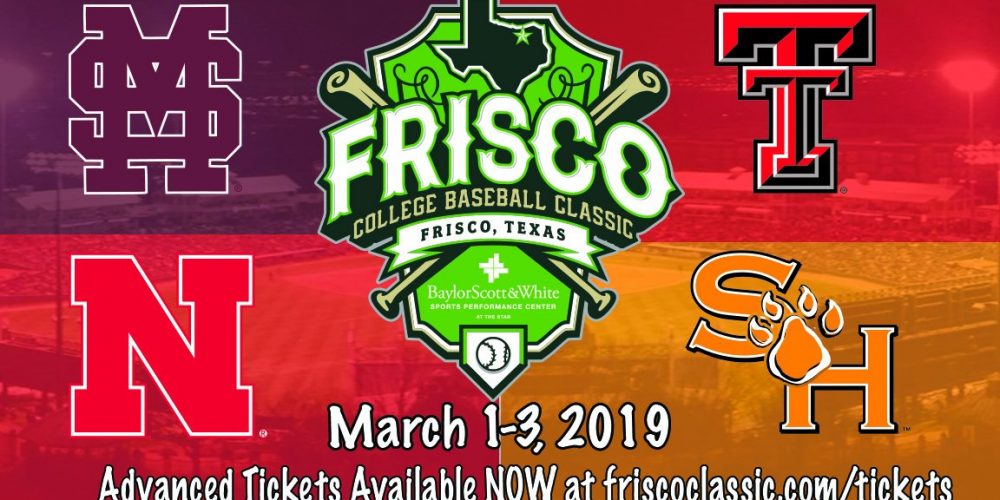 Earlier this month, Walter Villa wrote about the burgeoning early-season tournament trend, and explained how the organizers of the Frisco College Baseball Classic have worked hard to create a “bowl game”-like experience for players and fans that is unique to this sport. But the other key for any tournament is getting quality teams in the field, and our partners in Frisco have done that once again.

This year’s Frisco Classic, which begins tomorrow, features a round robin over three days between No. 3 Texas Tech, No. 12 Mississippi State, Sam Houston State and Nebraska. Those first three teams have all raced out to strong starts, posting a combined 19-4 record. The Cornhuskers won three of four in their first weekend, but then were swept in four games by reigning national champion Oregon State, so they’ll look to rebound against tough competition this weekend.

Below, we’ll take a look at some key players and storylines to watch in this year’s Frisco Classic, but first, here’s a look at the schedule:

If you’re in the Dallas Metroplex this weekend, you can buy tickets to the Frisco Classic here. 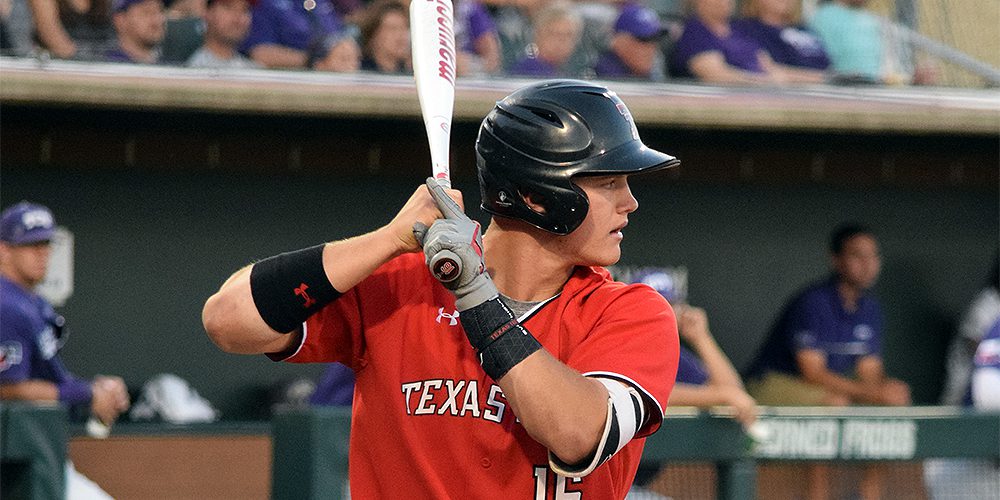 
Season In A Nutshell

The Red Raiders were upset opening day by Oregon but haven’t lost since. Their explosive offense once again looks like one of the nation’s best, and it has averaged more than 10 runs per game during Tech’s current six-game winning streak, which includes two wins over Oregon, a sweep of Kentucky and a midweek win against New Mexico State.

Junior third baseman Josh Jung is one of the most talented hitters in the nation, a slam-dunk first-rounder to be and one of the front-runners for the Golden Spikes Award. He’s gotten off to a decent start (.333/.486/.444), but he hasn’t gone deep yet, and he could be due for a huge weekend.

Righthander Caleb Kilian has some of the most electric stuff in the Big 12, with a fastball that reaches the mid-90s and a filthy power breaking ball when he’s on. But Kilian has gotten off to a rough start, with a 10.57 ERA in two starts this year. Will this weekend be his coming-out party?

Dylan Neuse was regarded as one of the top incoming juco transfers in Division I this year, and he has certainly lived up to that billing so far, leading Tech with a .407 average and an .852 slugging percentage. He’s a quick-twitch athlete who can really run but also has serious bat speed. High-profile freshman center fielder Max Marusak (.176) hasn’t gotten his bat going yet, but he will soon enough — and he provides game-changing speed. 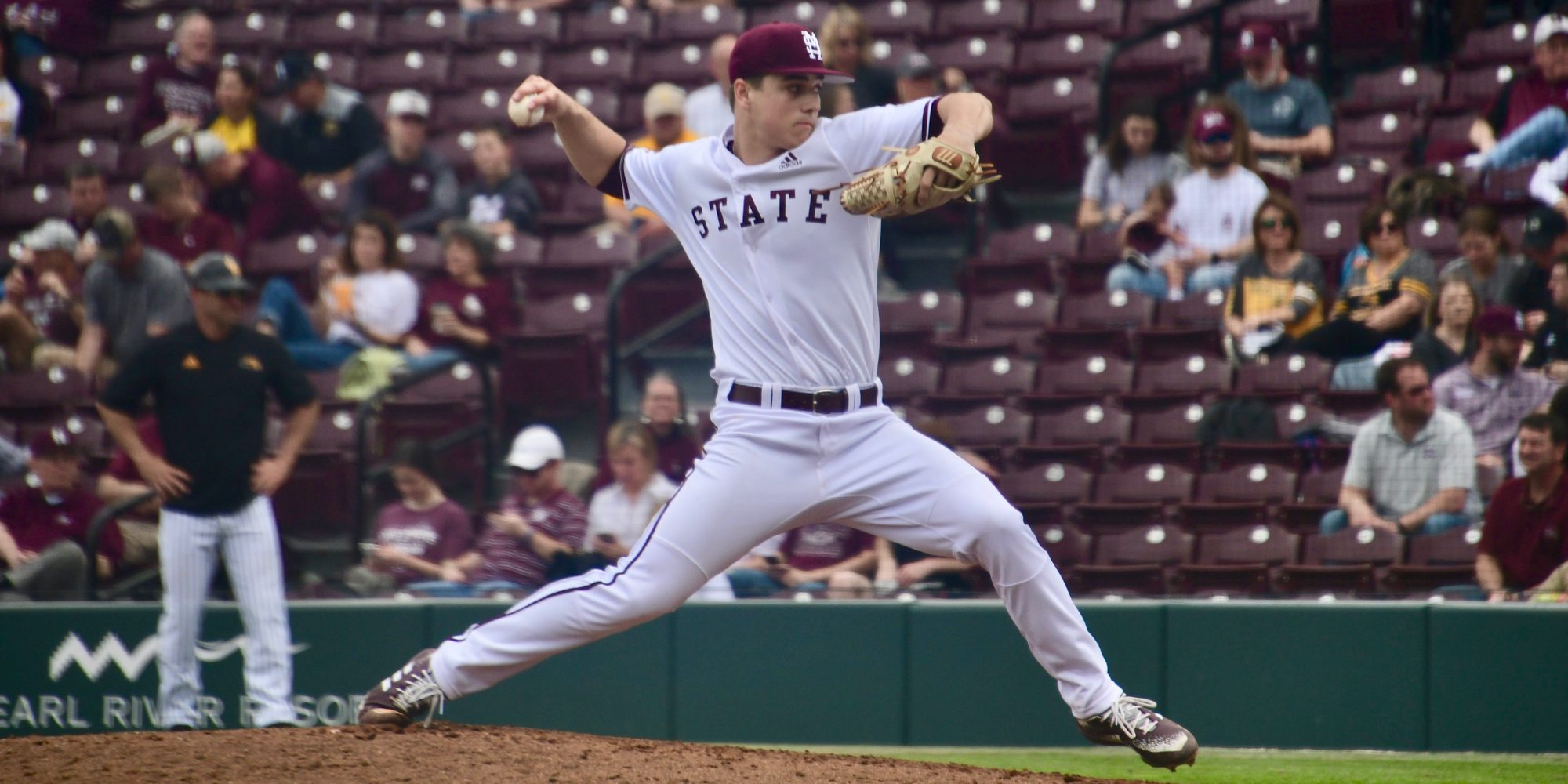 The Bulldogs have ridden dominant pitching to an 8-1 start, highlighted by a series win against C-USA favorite Southern Miss during which MSU allowed just five runs in three games. Mississippi State has a miniscule 1.54 team ERA through nine games, and its staff is holding opponents to a .171 average while MSU’s bats are hitting .295. The Bulldogs have outscored opponents 80-16.

Sophomore shortstop Jordan Westburg made a name for himself with a big postseason last June, highlighted by a seven-RBI game in the CWS against North Carolina. That performance served as a springboard for Westburg, a rising star with impact tools across the board. He leads Mississippi State in batting (.382) and OBP (.523) while playing flawless defense at shortstop, where he is fielding 1.000.

Unsigned first-round pick JT Ginn has been superb as the Saturday starter, going 2-0, 1.50 with 16 strikeouts and just two walks in 12 innings — but he’s only been MSU’s second-best starter so far. Ace lefty Ethan Small has a 1.50 ERA and a sparkling 24-0 K-BB mark in 12 innings, highlighted by seven innings of one-hit ball with 13 strikeouts last week against USM. Small’s calling card is his ability to command a deceptive 88-93 fastball and an excellent disappearing changeup.

Ginn has been every bit as good as advertised early on, showing an advanced ability to pound the bottom of the zone with his heavy sinker, which sits 91-93 and touches 94-95. That pitch makes him a groundball machine, but he can also miss bats with his wipeout slider, a power pitch in the 81-85 mph range. His Saturday assignment against Texas Tech rates as the most intriguing matchup of the weekend. 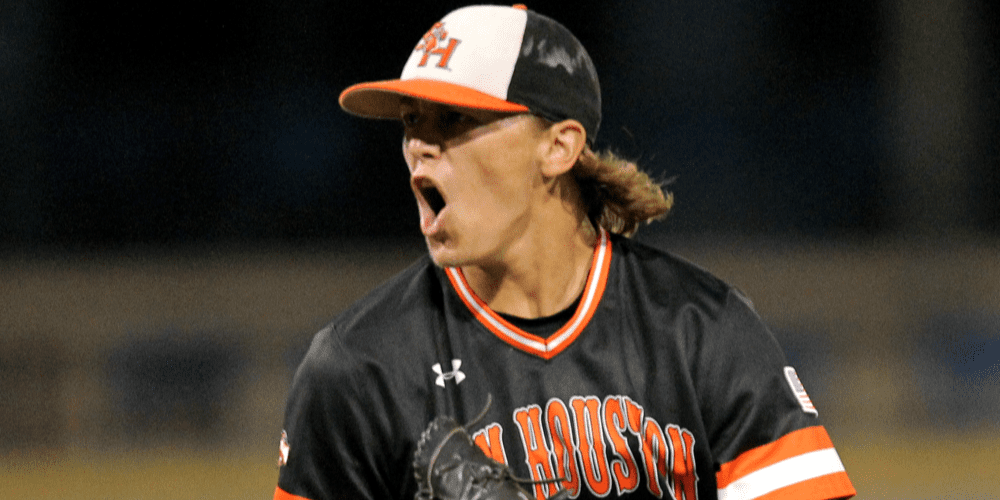 Sam Houston’s 5-2 start has been highlighted by a three-game sweep of Louisiana in Week Two. Pitching was expected to be SHSU’s biggest strength heading into the season, but the offense has done the heavy lifting so far, outscoring opponents 46-38, to make up for the staff’s 5.08 ERA. Expect that number to fall quickly, because this team is well stocked with impact talent on the mound.

Gavin Johnson leads Sam Houston in the triple slash categories (.409/.458/.682), but the team’s hottest hitter right now is Clayton Harp, who hit .571 with a 1.214 slugging percentage and three homers in three games against Louisiana, along with nine RBIs and five runs. A lanky 6-foot-4, 200-pound outfielder, Harp is a long strider who can really run (he’s been clocked at 6.5 seconds in the 60-yard dash) and has been a proven lefthanded run producer for going on four years now.

Ace Hayden Wesneski was outstanding last week against the Cajuns, striking out 10 over six strong innings of work, allowing three earned runs. He has worked hard to get his body in great shape over the last year, and his stuff has ticked up as a result: he can sit in the 90-93 range with his fastball and was up to 95-96 in the fall, with good run and sink. He also can miss bats with his very good 82-84 slider, and he has very good feel for his changeup.

Freshman Diego Davila is a versatile defender who can play all over the infield thanks to his smooth actions and excellent instincts. But he’s also proven precocious with the bat, hitting .385 (5-for-13) in the first two weeks, which figures to earn him more playing time going forward. He offers a mature approach and thrives at going the other way, and he also flashed easy power potential in the fall, though his pop has yet to show up in game action this fall. Stay tuned. 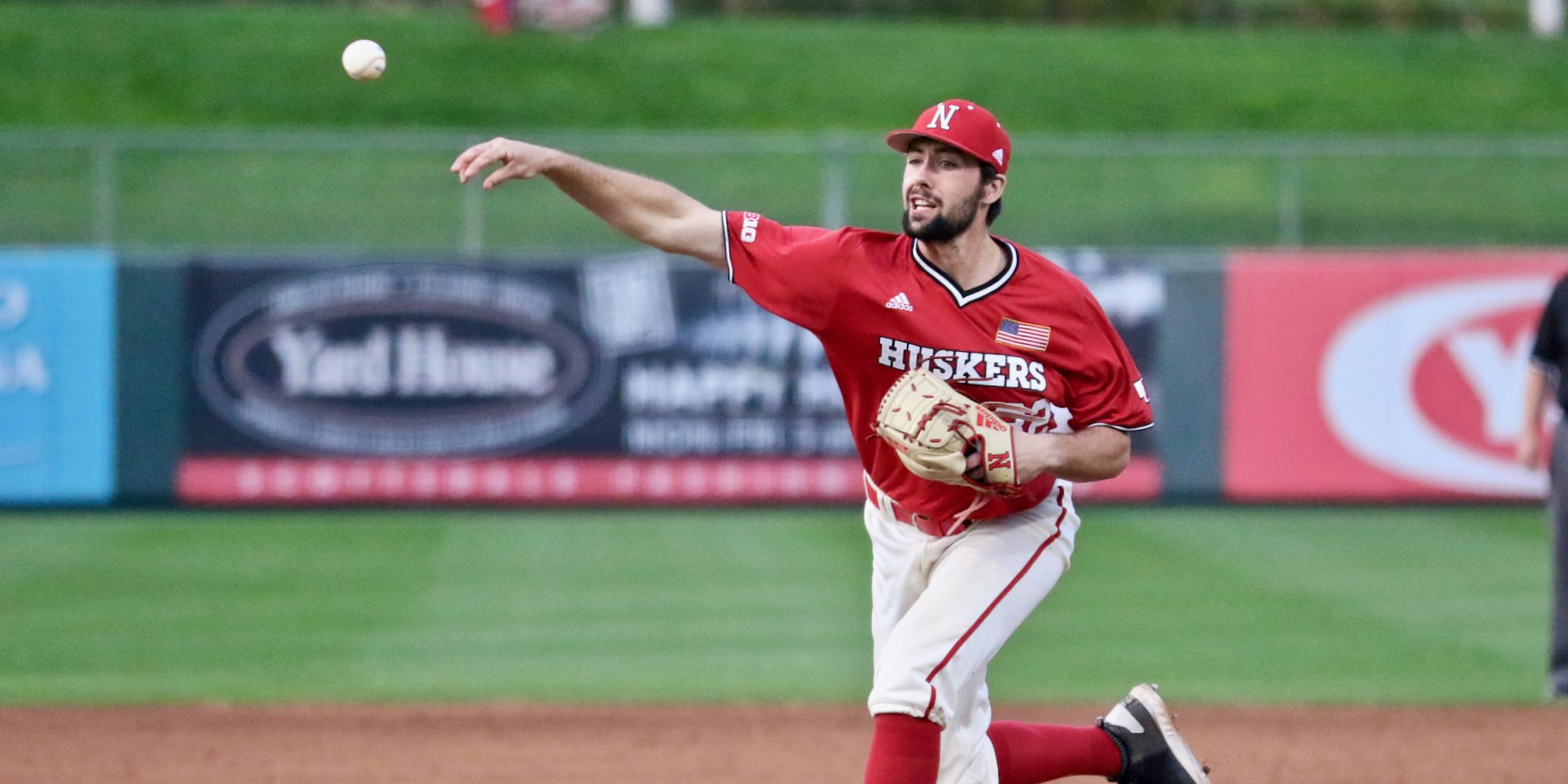 The Huskers got off to a strong start at UC Riverside in Week One, taking three out of four from the Highlanders. But they ran into a buzzsaw last weekend in Arizona, getting swept in a four-game set by reigning national champion Oregon State. Nebraska’s offense has done just fine, hitting .283 as a team and scoring 56 runs in eight games — but the pitching staff owns an unsightly 6.45 ERA. The Beavers have that effect on opponents.

Nebraska was really excited about the potential of outfielder Jaxon Hallmark heading into last season, and he put together a solid freshman campaign, hitting .261/.368/.310. But Hallmark has taken a big step forward as a sophomore, hitting .310/.364/.379 with two doubles and a team-best 11 RBIs through eight games. He’s a rising star with high-end athleticism, good speed and a natural knack for finding his barrel, but he’ll need to cut down his strikeout rate a bit to sustain his production (he has 13 Ks in eight games).

Brothers Mike and Matt Waldron will have to share this spotlight, because they’ve been Nebraska’s two best pitchers so far. Mike has a 2.25 ERA and a 12-0 K-BB mark in eight innings of relief, while Matt is 1-0, 3.38 with an 11-1 K-BB mark in eight innings. Matt has a long track record as a premier strike-thrower and has made 29 career starts over his previous three seasons. Mike is a former two-way player who is really taking off now that he’s focusing exclusively on pitching.

Nebraska brought in one of the top recruiting classes in the Big Ten, headlined by freshman third baseman Spencer Schwellenbach. A two-way talent who is not pitching this year while working his way back from an injury, Schwellenbach has made a real impact at the plate, hitting .297. The ball jumps off his bat easily, and expect his power numbers to spike as the year progresses.