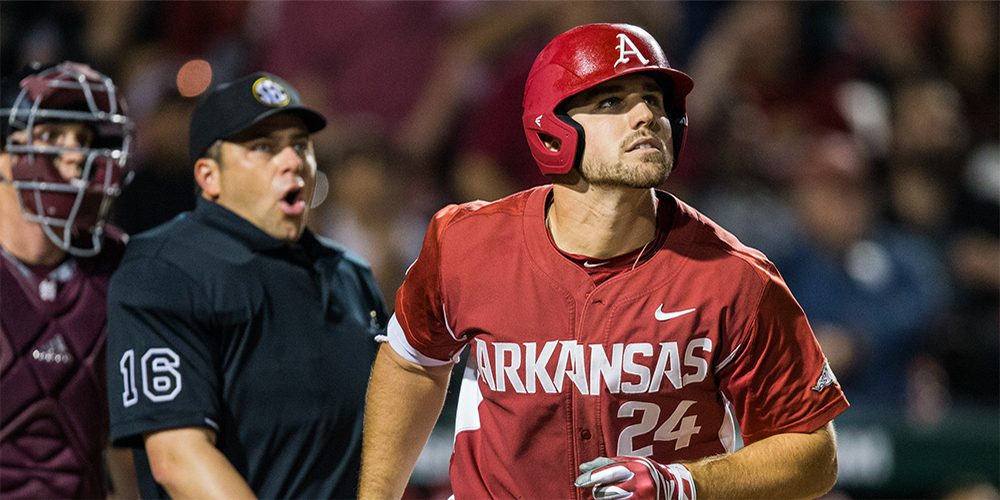 Getting High On The Hogs

After taking the series opener against LSU with ease, the Razorbacks looked well on their way to earning a series win over their rivals. After all, they were up 8-1 entering the seventh inning in Game Two of the series. But then things changed. Just like last season when the two teams met, LSU staged a huge rally, thanks in part to a Hogs meltdown, and the hometown fans went home disappointed with a 10-8 loss. In all, the Tigers scored a run in the seventh, three in the eighth and five more in the ninth. Furthermore, LSU freshman righthander Eric Walker tossed a complete game shutout in the series finale to win the series a day later.

But the most important moment of the season thus far occurred after the blown game. It was around 10:30 p.m., fans were quiet leaving the stadium, and the Arkansas players were stunned. Not again, they thought.

Long-time head coach Dave Van Horn wasn’t hanging his head. He took his team to the outfield, where the players expected a fierce tongue lashing. Instead, Van Horn had a passionate and simple message of hope and belief.

“You know, when we lost that game, I talked to them and was pretty upbeat,” Van Horn said. “I just told them that I thought they were very good, and that we had a great team that all the coaches believed in.”

That message has resonated with the Razorbacks. Since the LSU series loss, the Hogs have won six-straight contests and have accrued 60 runs. In other words, they’re averaging a whopping 10 runs a game in the last six entering this weekend’s series against an Auburn club who likely will have to make do without stud sophomore righthander Casey Mize. The Hogs also are in good shape to earn a regional host at this point, along with having legitimate national seed aspirations. Arkansas has an RPI of 13 with a 31-8 overall record, along with a 5-3 mark vs. RPI Top 25, 7-4 vs. RPI Top 50 and a solid 14-7 mark vs. RPI Top 100. That’s a stark contrast from last season, where the Hogs finished 26-29 overall, lost 12-straight games to finish the regular season and didn’t reach the NCAA postseason.