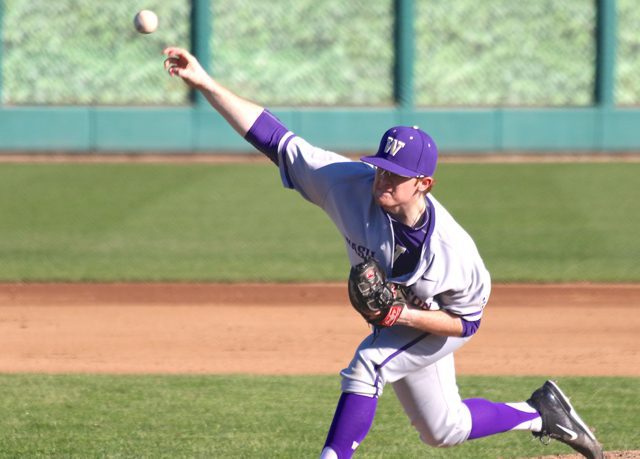 1. Hokies pull off upset of the weekend

Third-ranked Virginia carried a 12-2 record into this weekend, while Virginia Tech entered the weekend with a 7-9 mark, having just given up 33 runs in a series loss at Wake Forest and then dropping a midweek game at William & Mary. So naturally, the Hokies allowed just two runs in two games against the Cavaliers.

A day after Sean Keselica threw a complete-game gem and Virginia Tech won 2-1 on a walk-off walk, the Hokies got strong pitching from Aaron McGarity (6.2 IP, 6 H, 1 R, 0 ER) and Luke Scherzer (2.1 IP, 3 H, 0 R) in a 3-1 win against the Cavaliers. Virginia came unglued Friday, when Brian O’Connor was ejected late in the game (and assessed a four-game suspension for inadvertently making contact with an umpire) and the Cavs walked in the winning run. On Saturday, it was Virginia’s turn to load the bases in the ninth, but Scherzer struck out Pavin Smith looking to end the game. The Hokies have been the more poised team in tight spots over the first two games of the series, and they have outpitched one of the nation’s best pitching teams. Just how we all figured this series would go.

Kendall Rogers highlighted California’s big series-opening win in Friday’s Ten Thoughts, and the Golden Bears backed up that performance with a 6-2 win Saturday to clinch the series. Ryan Mason (8 IP, 5 H, 2 R, 1 ER, 2 BB, 4 K) stifled the Oregon offense, and the Golden Bears used a balanced 11-hit attack on offense, with seven different Bears recording hits. Cal improved to 15-3 and owns three wins against UC Irvine, three against suddenly surging Kansas State and one against Stanford. By now, it should be clear that the Golden Bears will be a factor in the Pac-12 race.

The Pac-12’s two northernmost teams evened their road series against the conference’s two SoCal teams with Saturday wins. Washington State got a complete-game gem from Joe Pistorese (9 IP, 7 H, 2 ER, 1 BB, 8 K) in a 4-2 win at No. 13 Southern California. Tricep issues held the senior back in January, but the Cougars have gradually increased his workload, and his stuff has been crisp, with his fastball getting up into the low 90s at times.

And Washington leveled its series at No. 14 UCLA with an 8-1 win behind ace Tyler Davis (8.1 IP, 6 H, 1 ER), who is quietly putting together another rock-solid season as a senior. Davis improved to 4-1, 2.45 with 29 strikeouts and eight walks in 36.2 innings this spring. I liked the way UW pitching coach Jason Kelly described Davis when I spoke with him last week.

“He’s Mr. Consistency; you know that you’ll be able to run him out for 100, 115 pitches,” Kelly said. “That’s why he throws on Saturday for us, he gives the bullpen a break. He’s very competitive, comes from an engineering family, so has a little different outlook. He’s not the tobacco-spitting, crotch-grabbing kid. A perfect Washington kid, because he’s a great kid, and a great competitor.”

There was also some drama in the Pac-12 on Saturday, as Arizona State evened its series against Oregon State 4-3 in walk-off fashion. The Beavers jumped out to an early 3-1 lead through two innings against Ryan Kellogg, who settled down to hold them scoreless over the next five innings. Exciting freshman Drew Rasmussen (6.2 IP, 7 H, 1 ER) turned in a strong start for OSU, but the Sun Devils rallied from behind to tie the game in the eighth against the Beaver bullpen. With two men on in the bottom of the ninth, R.J. Ybarra hit a drive to the warning track in left field, and defensive replacement Joey Jansen made an incredible catch crashing into the fence for the second out, temporarily saving the game. But it didn’t matter, as Brian Serven followed with a walk-off single to left. It was one of Saturday’s most compelling games; the rubber game should be fun.

Just when it looked like Cal State Fullerton had found its stride, the Titans dropped a midweek game against San Diego (snapping their seven-game winning streak) and then traveled to Indiana this weekend and proceeded to get swept in a doubleheader Saturday with their co-aces on the mound. The Hoosiers pounded out 10 hits against Thomas Eshelman in the opener and took advantage of three Fullerton errors in the 10th inning to win 5-4. Garza (6 IP, 5 H, 1 ER) was strong in the nightcap, but Fullerton couldn’t muster any offense against four Indiana pitchers, who combined on a six-hit shutout. The Hoosiers are now 12-4 and have won series at Stanford and home against Fullerton, and also split two games at College of Charleston. That’s an impressive resume for any team, but especially for a club that lost a bushel of All-Americans from last year. Our Michael Baumann was on hand for this one and has more details.

Alabama and Mississippi State split a doubleheader at Dudy Noble Field on Friday, setting up a rubber game Sunday. The Crimson Tide stormed back from a 5-2 deficit with eight runs in the eighth inning to win the opener 10-5, with Mikie White’s three-run homer providing the biggest blow. It was an uncharacteristic implosion for the MSU bullpen, as both Ross Mitchell and Trevor Fitts struggled in the inning. But Mississippi State didn’t need no

bullpen in the nightcap, as Austin Sexton (9 IP, 8 H, 1 ER, 1 BB, 7 K) went the distance in a 4-1 win. Jake Vickerson had three hits out of the No. 9 spot in the order, and Will Carter was a bit wild for Alabama, issuing six walks. It was a gut-check for the Bulldogs after the ugly eighth inning in Game One, and they showed plenty of resilience by rebounding in the second game.

The Mountaineers were one of the big stories of opening weekend when the young squad won a road series at Clemson. On Friday, they opened Big 12 play at Texas and pushed the Longhorns to extra innings before falling 4-3. On Saturday, they jumped out to a 6-0 lead in the first three innings, saw that lead vanish by the sixth, and went to extra innings again. This time, the Mountaineers came out on top, winning 7-6 on a bases-loaded walk by K.C. Huth. Shane Ennis (2.2 IP, 0 H, 0 R) picked up the win with strong relief work. WVU improved to 8-7 on the year, and of course it has yet to play a home game. Ultimately, this young team still looked like a long shot for regionals, but Randy Mazey and his staff always have their Mountaineers ready to play, and they won’t be an easy out for any opponent in the Big 12.

8. Wild one in Clemson

Notre Dame and Clemson also split a doubleheader Friday. Clemson took the opener 6-1 behind Matthew Crownover (8 IP, 3 H, 1 R, 0 ER, 4 BB, 6 K)—a pretty run-of-the-mill win for the Tigers’ ace. But the nightcap was anything but run-of-the-mill, as Notre Dame jumped out to a 6-0 lead, then watched Clemson storm back to tie it in a six-run sixth. But like West Virginia, the Fighting Irish kept their cool and won anyway, scoring five runs in the final two innings to win 11-6. Notre Dame pounded out 16 hits in that one, led by Robert Youngdahl and Zak Kutsulis, who had three hits and two runs apiece. Clemson righty Brody Koerner (3.1 IP, 8 H, 4 ER) struggled for the second straight week since shutting out South Carolina. The performance of the rotation outside of Crownover has been poor since the Gamecock series.

9. There’s no stopping the Aggies

Texas A&M has lost two of its biggest arms to injuries (Tyler Stubblefield and A.J. Minter), but that hasn’t stopped the Aggies from winning every game they’ve played this spring. A&M improved to 20-0 with a series-clinching 10-4 win against Auburn on Saturday, getting a strong start from lefty Matt Kent (8.1 IP, 10 H, 4 ER, 0 BB, 7 K), who gave up two runs in the first and two in the ninth but nothing in between. The A&M offense continued to rake, as it has just about all season. Logan Taylor and Ronnie Gideon led the charge with two hits and two RBIs apiece. That looks like one of the deepest lineups in college baseball, and clearly the pitching staff is very deep too, because it has withstood those two injuries with remarkable aplomb.

Tennessee Tech senior righthander Chris Chism made his first stat of the season Saturday in place of the injured John Gora. He made the most of the opportunity, turning in a 17-strikeout, one-hit shutout against Tennessee-Martin to lead TTU to a 2-0 win. It was far from elite competition—the Skyhawks are just 2-11—but stat lines don’t get much better than that. By the way, Chism also threw a one-hit shutout against UT Martin last year, when he struck out 10 (a career high at the time).