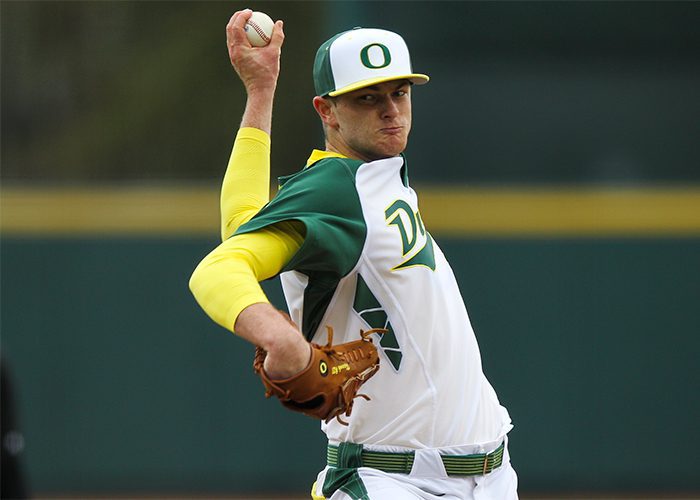 At first glance, this may not seem like an obvious choice for the most fascinating prospect matchup of the weekend, but upon closer examination, it is littered with outstanding material for prospect watchers. Most notably, if you like standout freshmen or the 2018 draft class, watch this series. The Beavers have a pair of the best freshman in the nation in Cadyn Grenier and Nick Madrigal, both of which have lived up to lofty expectations in the early part of the season. Both are above average athletes with better than average bat speed and barrel control. These are not simply prospects with raw tools, but hitters with advanced bats ready to take on highly advanced pitching. How they match up with the San Diego pitching staff will be very interesting to watch. One of those Torero pitchers will be freshman LHP Nick Sprengel. Sprengel is a high upside, projectable southpaw that works at 91-93 mph, topping at 94 with a nasty plus slider at 81-83 mph. He’ll need to command more in the zone or risk being overwhelmed by this Beaver lineup, but he has the swing and miss to eventually be a first round type prospect.

The sophomores in this west coast showdown may be even more intriguing, however, as 2015 breakout star K.J. Harrison hasn’t appeared to miss a beat with the bat early on in 2016. Power armed 2016 draft eligible sophomore Drew Rasmussen has had some rocky moments early on this season but his 93-97 mph fastball and power breaking ball still make him one of the best pitching prospects in the class. He’ll be tested by budding San Diego star sophomore Riley Adams, who looks like one of the best hitters in the nation in the early weeks of the spring. This will be a big test for the 6-foot-4 righty swinging catcher, as we will get a look at how his powerful bat translates against some of the power arms the Beavers can run out there.