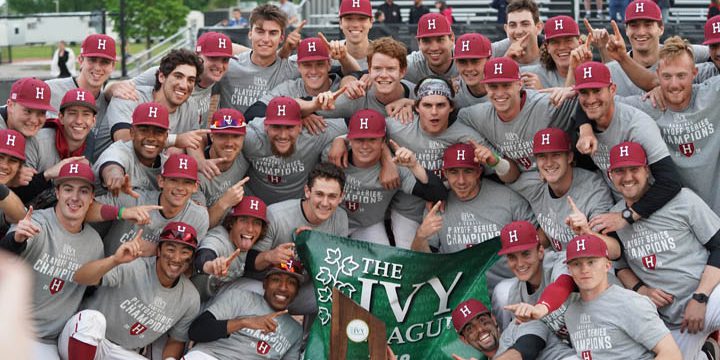 In a baseball oddity, Cole Roland is a prominent senior who has yet to play a single college game.

Odder still is the fact that this relatively inexperienced player will enter this weekend as a prominent member of the bullpen – perhaps even the closer — for the Dartmouth Big Green, who are preparing to open their season at Louisville on Friday.

The oddity trifecta is that Roland has already signed to play for Wake Forest next season as a graduate transfer.

Welcome to the Ivy League, the nation’s only Division I conference that cancelled its 2021 season due to COVID. That cancellation has helped create strange stories like what has happened to Roland.

The conference is also starting this year’s schedule (as usual) one week later than everyone else, which has only added to the long and frustrating wait.

And while the entire Ivy League is starved for baseball, the Roland case is extreme.

A 6-3, 205-pound right-hander and a Massachusetts native, Roland had an elbow issue and did not pitch in his senior year of high school at Thayer Academy, spending that season as the DH.

After that year, he had elbow surgery, which caused him to miss his freshman season at Dartmouth. As a sophomore, he would’ve been ready to pitch in mid-March, but COVID shut down the entire world before Roland could get on the mound.

Then the Ivy League shut down all of last year, and here we are with Roland – a senior with zero college experience.

“When we weren’t allowed to play, I realized how much I want to play,” said Roland, who turns 23 in April. “My realization was, ‘Damn, this is really what I want to do.’

“I’m not going to let anything get in my way.”

Roland got the scholarship to Wake Forest for the 2023 season due to the work he turned in last summer. He earned all-star status in the New England Collegiate Baseball League.

“Cole has the ability to pitch in multiple roles, including as a starter,” Dartmouth coach Bob Whalen said of Roland, who struck out 18 batters per nine innings in his role as a closer last summer.

“He’s much bigger, stronger and more mature now than when he first arrived on campus.”

“My out pitch is the curve,” Roland said. “My fastball will stay up in the zone. My curve starts in that same zone and then drops out.”

Roland expressed optimism when asked about how the Big Green will do this season, but he admits that facing Louisville right away is a daunting challenge.

“We haven’t even been able to practice outdoors and see fly balls (due to the frigid weather),” Roland said. “We’ve seen some ball flight indoors.

“It will be a disadvantage because Louisville has already played some games, but it will just give us more of a chip on our shoulders.

“We want to play the best competition in the country. Our ultimate goal is to play those teams in the NCAA Tournament, so we might as well play them now.”

Dartmouth, of course, is not the only Ivy League team eager to return to competition.

“Last year was difficult,” Princeton coach Scott Bradley said. “It was hard for our guys to watch everyone else compete while we did not. They realized that you can have your jersey taken from you at any time.

Redshirt years are not allowed in the Ivy League. That’s why about “15 to 20 percent” of all Ivy League players (by Bradley’s count) pulled out of school last year, only to return this season with their eligibility intact.

“We only had about 16 players on campus last year,” Bradley said. “During that time, we ran an old-school instructional league. Our eight position players were getting 20 to 25 at-bats per scrimmage.”

Princeton will start its 2022 season on Friday in Holly Spring, North Carolina, opening a four-game series against Purdue. That will morph into 16 straight road games for Princeton.

As stated, Dartmouth visits Louisville, and pretty much all Ivy League teams have scheduled tough openers.

• Columbia, picked to finish second in the Ivy, will start with 15 straight road games, including the first three at Stetson and a trip to Baylor.

• Penn will start with three games at Texas A&M, followed by nine more road games in a row.

• Brown starts with three games at Memphis and three at South Florida.

• Harvard, which won the most recent Ivy League postseason tournament – that was in 2019 – will open with three games at the Miami Hurricanes. Harvard then goes to Rice for four games. From there, Harvard heads west: four games at Cal Poly, one at Fresno State and three at UCLA.

Speaking of Harvard, coach Bill Decker – whose team has played just six games over the past two seasons – said he was initially concerned about his squad’s chemistry.

“We have three classes of players who had never been in the same locker-room,” Decker said. “Through the recruitment process, the character piece is a bit unknown. ‘Are you really getting what you think you’re getting?’

“But in the fall, our guys bonded. They meshed together well.”

It is expected that 6-6, 220-pound right-hander Adam Stone will be one of Harvard’s weekend starters. Stone, due to having elbow surgery in high school, is a junior who has never thrown a pitch in his college career, similar to Dartmouth’s Roland but with one year less service time at this level.

Stone has shown his quality by pitching in the Cape Cod Summer League and also by starring for Team USA.

Meanwhile, Penn is the only Ivy League team that played at least some games last year, going 6-8.

The Quakers are led by right-hander Brian Zeldin.

At Princeton, Bradley said he has a smaller-than-usual roster of 26 players, including only seven who have ever played even one college game.

Princeton’s Nadir Lewis has had 184 career at-bats, and that’s notable in this year of oddities.

“If you add the college at-bats of all our other players,” Bradley. said, “it’s still far less than Lewis’ totals.”

In the Ivy League 2022, that makes perfect sense.