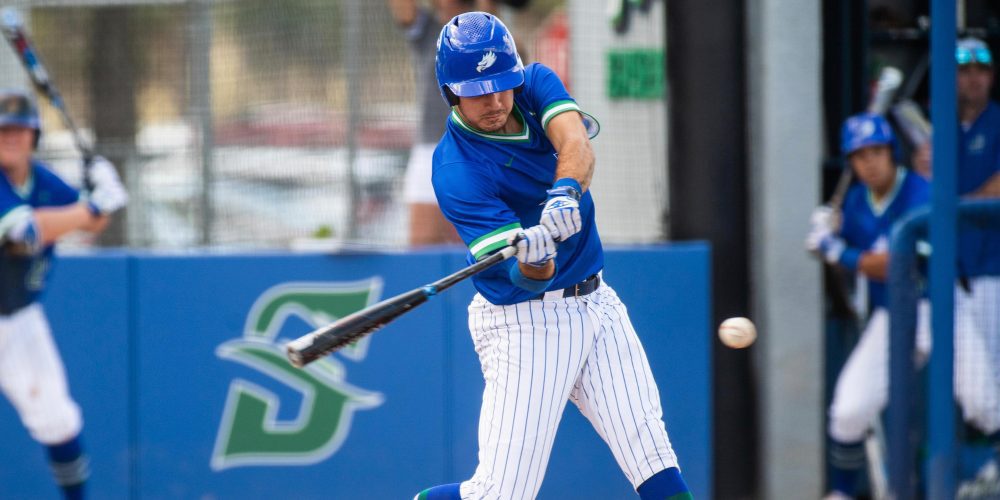 Melissa Miller, the head equipment manager for Florida Gulf Coast athletics, had just stepped outside her office at Alico Arena this past Friday night when she heard an uncommon sound.

It was the crack of a bat … except way, way, way louder.

“I didn’t see the hit,” said Miller, whose office sits beyond Swanson Stadium’s left-field fence. “But based on that sound, there was no chance that ball wasn’t leaving the park.”

Eagles DH Joe Kinker, a 6-1, 220-pound righty-hitting freshman, had just beaten Rutgers 4-1 with a three-run homer in the bottom of the 11th inning. It was the first walk-off dinger of his career at any level, and the ball stuck its landing near a dumpster just outside the basketball arena.

Three days later, as a favor to D1Baseball.com, Meghan Ellis, athletics communications assistant for the Eagles, walked from the left-field fence to the dumpster, counting off 85 steps, making Kinker’s blast an estimated 435 feet.

But as far as that baseball sailed, it pales in comparison to the figurative distance of the journey traveled by Kinker, who just 18 months ago had given up on his dream of playing college baseball and was instead competing in … boys’ volleyball.

Here’s how it all went down:

As a sophomore and junior, Kinker was a starting first baseman for a Florida powerhouse, Venice High. Kinker also played for 5 Star National, a travel-ball team based in Warner Robbins, Ga.

That 5 Star National team won a national title in the summer of Kinker’s junior year. Kinker hit fifth in a loaded lineup that included cleanup batter Brandon Howlett, who committed to Florida State but instead signed with the Red Sox; and Aaron Sabato, who just this past Sunday homered twice for North Carolina against Miami.

In fact, out of 22 players on that 5 Star National roster, 18 had college commitments during that summer of 2017, and Kinker was one of the few who had no offers.

“We had kids committed to Miami, Clemson, Alabama, LSU, among others,” said Andy Burress, the president and owner of 5 Star National. “We never doubted Joe’s ability. He always hit.

The lack of attention from college coaches left Kinker bewildered.

“It was frustrating,” Kinker said. “I was playing at the same level as these big-name guys, but I wasn’t getting that interaction from the scouts. I wasn’t being recognized or seen in the same light, and I was wondering why I wasn’t being noticed.”

Kinker was so dejected with the process that he gave up on his dream.

Convinced he wouldn’t get the chance to play college baseball, Kinker decided he would focus on academics as a senior with the noble goal of ultimately becoming a history teacher for high school students.

While these ideas were swirling in his mind, Venice had started a boys’ volleyball program, and the coach had convinced Kinker to come out for the team.

In the meantime, Kinker would still take batting practice and ground balls with his father, Joe Sr., two or three times a week, just for fun.

Kinker’s life changed in December of 2017.

Before quitting baseball or at least becoming disenchanted with the recruiting process, Kinker had signed up for a camp at Florida Gulf Coast.

“I was already signed up before all the stuff hit the fan,” Kinker said. “My dad thought it would be a good idea if I still went. I said, ‘Yeah, sure. This will be my last hurrah in baseball. Let’s see what happens.’”

What happened, in essence, was astonishing. There were about 250 baseball prospects there, and it’s fair to say that no one impressed more than Kinker, who saw 10 batting-practice pitches from Eagles assistant coach Brandon Romans and hit eight of them for home runs. Of Kinker’s other two swings, one was a line drive and another produced a shot off the wall.

“We’ve had some really good players here, and they never did that,” Tollett said.

Prior to that BP display, Tollett said he had seen Kinker play and had only witnessed a hint of his power.

“The toughest thing as a recruiter is to evaluate a hitter,” Tollett said. “You have to evaluate the arm he is facing.

“But after what he did at our camp, Joe went from a guy who was on our radar to the front of the screen.”

Knowing that Kinker was no longer playing high school baseball, Tollett did his due diligence and checked with Venice coach Craig Faulkner, whom he has known for 30 years.

Tollett said Faulkner told him there were no character concerns with Kinker, and that removed all doubt.

That night, Kinker got a call from Romans.

“He asked me if I would like to be an FGCU Eagle (as a preferred walk-on),” Kinker said. “I didn’t hesitate. I said yes right away.” 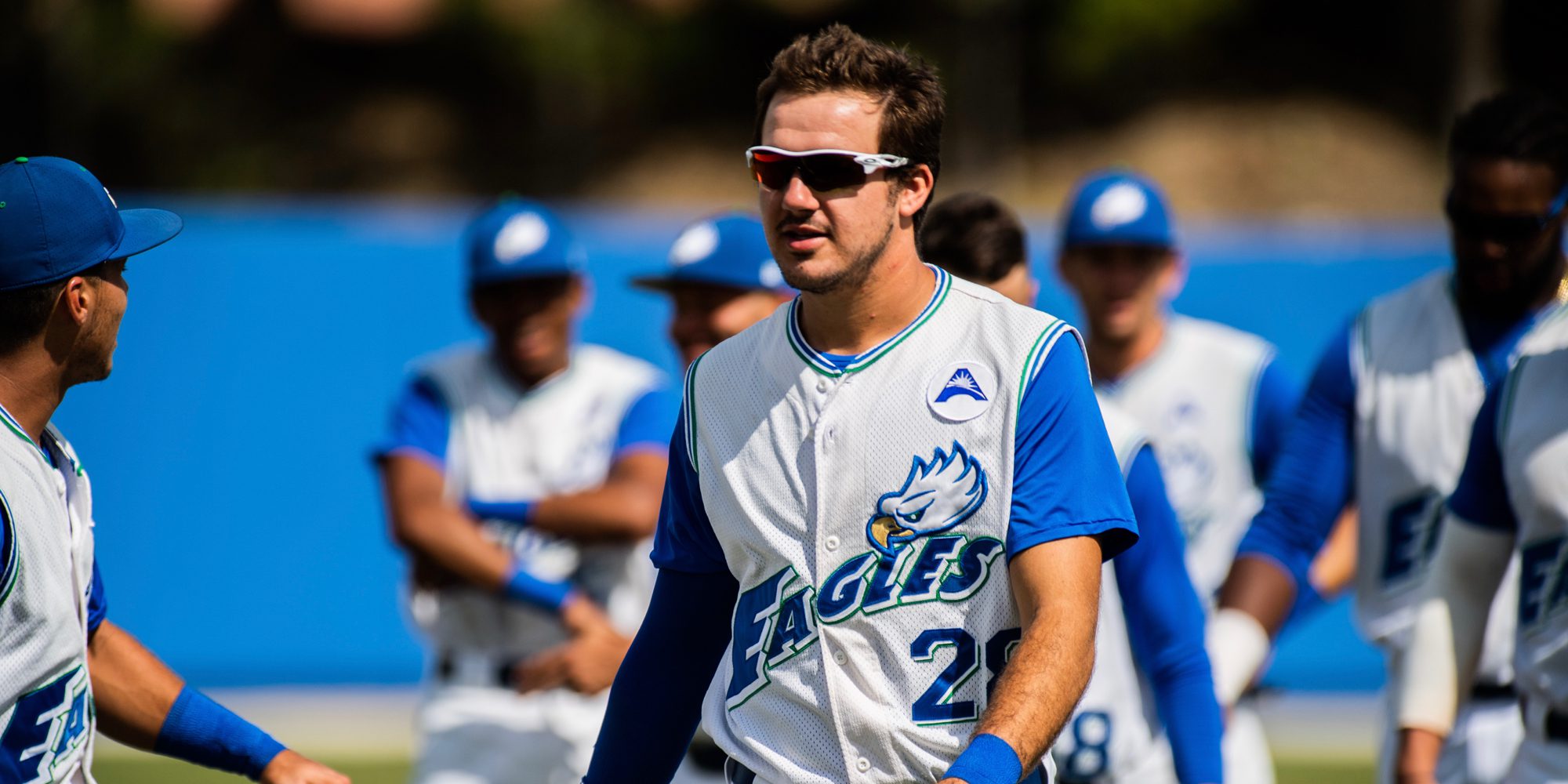 Kinker immediately called his father with the good news. After countless road trips to Georgia and Tennessee and all over Florida to participate in baseball showcases, Kinker had finally found his spot, and it was just 45 minutes from home.

“After the second day of the camp, Coach (Tollett) found me and talked to me a little bit,” Kinker said. “He followed me out to the parking lot, and he said, ‘No one has showed up to our field to do what you did, and we’ve had All-Americans here.’

“He was really excited. It was cool because it was my first time getting recognized by a college coach. It was sheer joy for me. I felt a weight being lifted off my shoulders, something that had been bearing down on me for what seemed like years.”

When he next saw his father, there was a special embrace.

“My dad is not the type to jump up and down, but he was ecstatic,” Kinker said. “It was an awesome moment, hugging him.

“I said, ‘We’re doing this.’ My dad and I have always been in this together.”

Once Kinker got on campus, he ran with his opportunity. He hit in the fall. He hit in the spring. And after not starting the Eagles’ season opener, he homered in his first at-bat of FGCU’s second game, and he hasn’t left the lineup since.

He is batting .462, which ranks seventh in the nation and first among freshmen. He also leads all Atlantic Sun players in batting average, slugging percentage (.708), on-base percentage (.576) and runs (29), and he ranks second with four homers.

Kinker said that once he got the offer to be a preferred walk-on with the Eagles, he tried to rejoin the Venice team but was rebuffed. He had missed fall practice, and rules are rules.

However, Tollett said he saw Faulkner recently, and the Venice coach and his staff were all thrilled for Kinker and his success.

Tollett also said he is proud of his Eagles program’s ability to find hidden gems, noting that success stories such as Chris Sale and walk-ons Jake Noll and Richard Bleier all came to Florida Gulf Coast with no other D-I scholarship offers.

Sale is now a seven-time All-Star and a 2018 World Series champion with the Red Sox; Noll, an infielder, was featured in the Washington Post on Sunday because of the terrific camp he is having with the Nationals; and Bleier has a 1.97 ERA in 111 major league games with the Orioles.

“It seems like we get walk-ons,” Tollett said, “and they become good here.”

That is starting to happen with Kinker, who was 0-for-4 with three strikeouts last Friday night when he stepped to the plate in the 11th inning against Rutgers.

Kinker, who hopes to be the Eagles’ starting third baseman or first baseman by next season, is still adjusting to the difficult job of being a DH, and after striking out in the bottom of the ninth, he was hoping for one more chance.

“Since hitting is my only job on the team right now, I try to stay as focused as I can and prepare mentally,” Kinker said. “I don’t try to just wing it.

“Against Rutgers, I had three backward Ks (caught looking). The pitchers were hitting their spots, but I told myself that I wanted one more at-bat. I knew I could still help.”

Tollett said that had it been a different type of person, he would have removed Kinker from the game.

“Joe clears his mind as good as anyone I’ve ever coached and better than any freshman,” Tollett said. “I still wanted him up there.”

Indeed, with two runners on and two outs, Kinker worked the count to 2-1 before smashing that baseball over the fence, over a retention pond and out by that dumpster outside the basketball arena.

Asked this week for his biggest thrill of the season, however, the subject of that home run wasn’t mentioned.

It was something much simpler.

“It’s just being back on a team,” he said. “I didn’t get that chance my senior year of high school. It’s awesome that I get this chance now to be on a team with an awesome group of guys.

“College baseball is not for everyone. It’s a grind. You have to love what you do, and it’s not just going to fall in your lap. You have to put in the work.”