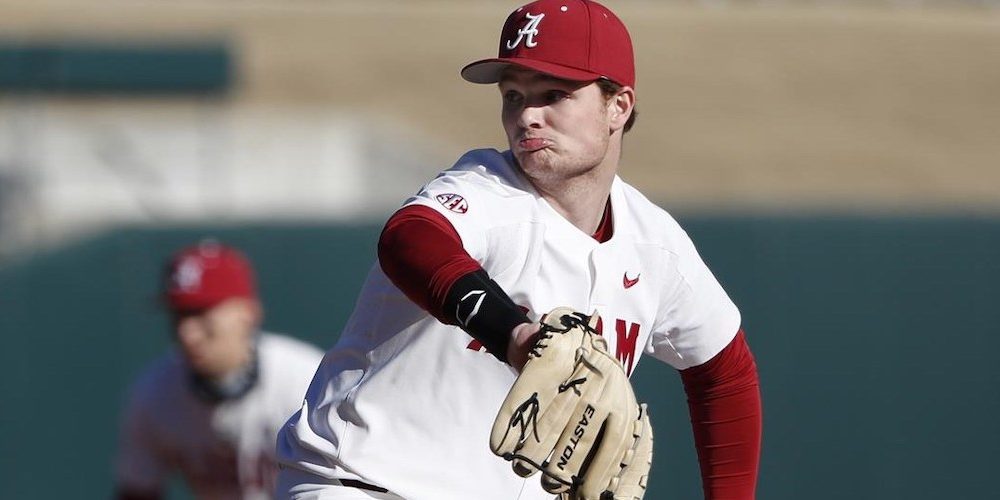 Alabama second-year freshman lefthanded pitcher Connor Prielipp will undergo Tommy John surgery on Thursday and will miss the remainder of the 2021 season. The surgery will be conducted by Lyle Cain from Andrews Sports Medicine.

The Prielipp news comes as a crushing blow for the ultra-talented 6-foot-3, 205-pounder. Prielipp is regarded as the nation’s No. 1 MLB draft prospect for the 2022 class, and now will miss the rest of this year, and will not pitch in spring of his draft year.

Prielipp’s 2021 has been littered with frustrations.

The hard-throwing lefthander had a terrific fall. He was 92-95 and up to 96 mph with his fastball in the fall, along with a filthy 88-90 mph slider and a mid-80s changeup. He drew comparisons to former high first-round pick Asa Lacy in the fall and was primed to have a massive spring. He was going to change the dynamic for the Crimson Tide.

Here’s what Alabama coach Brad Bohannon said about Prielipp in the fall:

“We really challenged him to be more efficient and try not to pitch so deep into counts with everyone, and his misses are smaller and he’s just doing a great job.

“Everything has gotten better — like, way faster than normal,” Bohannon said. “The breaking ball is shorter and tighter and it doesn’t come up out of the hand, it almost looks a little more cutterish now, last year it was more like a true slider, slurvy. You just can’t predict at what rate a guy is going to improve, and he’s just on a really steep rate. I would say the changeup is his third pitch but it’s a legitimate pitch now. He didn’t throw a lot of changeups in games last year. You know, he’s from Tomah, Wisconsin — he didn’t throw a changeup in a high school game, there’s no need to slow the ball down. So he’s a legitimate three-pitch guy, he’s commanding the ball better.”

Prielipp opened the spring with a terrific start against McNeeese State, striking out eight, not walking anyone and allowing just four hits in five shutout innings.

That was one of his three starts this season, with the last outing coming against LSU a few weeks ago. In that outing, Prielipp struck out the side in the first, but also allowed two runs on three hits in just an inning of work. He didn’t work another inning the rest of the regular season, finishing the spring with a 1-1 record and 3.86 ERA, along with 12 strikeouts and a walk in seven innings.

Alabama now presses forward at the SEC tournament knowing it won’t have Prielipp or fellow starting pitcher Antoine Jean, who’s also on the shelf for the duration of the season because of a shoulder impingement. Jean is expected to return to the mound at the Cape Cod League this summer.

Alabama won its 13th SEC game with a win over South Carolina on Tuesday, but likely needs to win two more games to reach the NCAA tournament next weekend.

But one thing is for certain, if the Tide make the tourney, they won’t have Prielipp at their disposal.

His season is over.