Miami is riding the hot hand going into the postseason, and Eric Sorenson previews the Hurricanes, red-hot East Carolina, Columbia and Florida International.

Most Exciting Player: Zack Collins. Anything can happen when this guy strolls up to the dish for the Hurricanes, and behind it he’s a block of granite for anybody who dares to round third for a play at the plate.

Best Hitter: George Iskenderian. This guy almost gets forgotten will all the talented lumberjacks on this Miami team, but Isky is the one leading the Canes with a .379 average.

Best Pitcher: Andrew Suarez. Although the Miami lefthander was a third round draft pick last June, Suarez has had a so-so senior season. He needs to break out now.

X-Factor: If good pitching really does beat good hitting. This is one offensive regional that could hedge toward the 90s-like football scores. Whoever pitches best wins.

Best Offensive Team: Miami. And that’s by a longshot too, considering the ‘Canes are fifth nationally in hitting, seventh in slugging percentage and second in scoring (8.4 runs per game).

Best Defensive Team: East Carolina. None of these four teams are setting the world on fire defensively, but the Pirates lead the pack with a .972 fielding percentage.

Miami’s Win Probability (1-to-10): 9. Pretty easy field for the Hurricanes to navigate through. Well… then again, didn’t we say that last year too? Hmmmm. 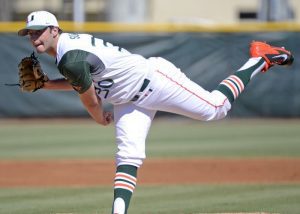 Miami lefty Andrew Suarez needs to have a strong showing this weekend. (Miami)

Miami is making its 43rd NCAA tournament appearance. Niiiiiice. But it’s not a big surprise that the 2015 Canes got off to a bit of a rough start at 10-6, because road trips to Gainesville and Louisville were some of the coldest conditions to play baseball in. That’s not good news for the brittle tropical bones of the Hurricane players and fans. They also had a rough stretch losing two of three at Virginia and vs. Florida State in mid-April. But since then it’s been Katy-bar-the-door, as The U has gone 14-1 and averaged a Gorilla-ball era 12.7 runs per game. Gah! What gives with that offense, you ask? Shhhew, they look like a bunch of linebackers at the dish. Zack Collins (.311-15-65), George Iskenderian (.379-3-50, 23SBs), Willie Abreu (.294-4-37) and national RBI leader David Thompson (.335-19-80) all have some significant thump to them. The pitching staff has had to make adjustments as senior All-American Andrew Suarez (7-1, 3.09) has been decent, but not dominant, after missing a few starts early in the season. LHP Thomas Woodrey made the transition from expected reliever to the Friday night role with aplomb, going 6-2, 2.72. The staff as a whole was a solid 3.05 team ERA, so there is still lots to like about this arms staff.

East Carolina is making its 27th postseason appearance, but it will be its first Big Dance since 2012 as it reaches the field of 64 in the first year of coach Cliff Godwin’s tenure in Greenville. Talk about a clutch team, the Pirates have gone a remarkable 9-0 in one-run games since April 18th, including a span of six straight games vs. UConn, N.C. State, Duke and then all three games in their home series vs. UCF in late-April. The staff ERA of 3.29 is good for 34th nationally and features a pair of lefties in Evan Kruczynski (8-4, 3.06) and Reid Love (7-3, 2.84) as their top guns. And obviously, with the spate of close wins, the bullpen has improved a great deal as the season has gone on. Frosh Joe Ingle (eight saves in 30 appearances) and soph Nick Durazo (5-0, 2.31, 25 appearances) have been a big reason for this positive boon. As a team, the Pirate arms issued just 144 walks in 531 innings. That’s good stuff. Junior catcher Luke Lowery (.313-12-50) and Hunter Allen (.353) lead an offense that features five .300-plus hitters, though Lowery is their only real power threat.

Columbia will not be intimidated by anyone in Coral Gables. (Eric Sorenson)

Strangely, this is the second straight year Columbia has been given a No. 3 seed in the Big Dance and been sent to Coral Gables. But last year, CU pulled an RPI in the mid-40s going in, this year it’s at 65. But still a three-seed? Ohhhhh-kay. But don’t mistake this as pessimism, I got a chance to see the Lions with their third straight Ivy League title and all the talk after the final game revolved around how they lost both games in the Coral Gables Regional a year ago by one run. These Lions are ready to feast on the unsuspecting, and they are capable of it too. Just ask Houston, who they beat twice on opening weekend. And that was before CU had any outdoor practices. The offense can be scary, ranked 29th nationally at .297 and 16th in home runs per game with 1.04. Former Afghanistan/Iraq veteran Joey Falcone is one of the best stories in college baseball, hitting a team best .347 with 11 home runs. Fellow thumper Gus Craig chimes in eight more yard calls to go with a .335 average. CF Jordan Serena is the catalyst at the top of the order with a .311 average and team-best 21 stolen bases. The pitching staff had to be re-tooled this year, but George Thanopoulos (5-5, 3.65) and Kevin Roy (6-3, 2.66) give them a shot each time out. Freshman Harrisen Egly (3-1, 2.49, 5 saves) has emerged late in the season as the stopper, including twice in the Ivy League Playoffs vs. Dartmouth.

Florida International found a bit of inspiration in Hattiesburg and won the Conference USA tournament in four-straight games to reach its first Big Dance since 2011. Wanna hear and oddity? The Panthers went 7-7 in weekend game ones this year, but four of those wins game against Tennessee, Southern Miss, Florida Atlantic and Rice. Not a bad list, huh? Another oddity: Despite being just nine miles away, FIU did not play first round opponent Miami yet this season. The offense hits just .289 but they’ve averaged 9.75 runs per game in their last nine wins, including hitting .370 and scoring 44 runs in their four game sweep of the C-USA tourney. Lumberjacking Edwin Rios leads the bat brigade with 18 home runs and a .314 average. He teams with Brian Portelli’s .350-4-45 numbers to make for a formidable punch. The starting pitching is serviceable but young, so watch out for the freak-out factor here. Sophomores Christopher Mourelle (7-7, 3.30) and Cody Crouse (5-5, 4.13) are joined by freshman Andres Nunez (6-5, 3.75), who tossed a team-high 75 Ks. But the real strength of the mound corps is the bullpen duo of Williams Durruthy (2-1, 2.31) and Danny Dopico (2.11, 10 saves) as both made 25 appearances this year. The bottom line to the Golden Panthers is if the bats stay as hot as they’ve been, don’t sleep on these guys.